Minority Rights Group > News > News and blogs > Ukraine: How Transcarpathian football got its own “Roma” FC

Ukraine: How Transcarpathian football got its own “Roma” FC 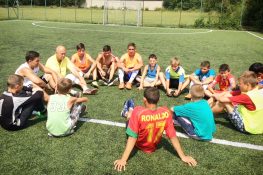 A football programme for Roma youth in Ukraine is empowering this marginalized minority community to gain confidence and participate in society. MRG Europe spoke to Yuri Mandych, head of the programme Support for Street Football Developments, to find out more.

For the last five years, the city of Uzhgorod in Ukraine’s Transcarpathia region has hosted a football tournament for Roma teenagers – giving them the opportunity to graduate from street football to international competitions while also feeling included in Ukrainian society. The tournaments are part of the project Support for Street Football Developments, launched as a component of MRG Europe’s A Partnership for All programme, and implemented by Ukrainian civil society organization, Unite the Efforts.

The promotion of the rights of minorities is at the heart of the programme, which focuses on addressing the specific issues faced by the highly marginalized Roma minority community in Ukraine. The lack of effective partnership between Roma civil society organizations (CSOs) and Ukrainian local and state authorities is a major obstacle to Roma participation in decision-making. MRG Europe recognized the need to develop models of innovative, sustainable practice to guide both CSOs and authorities. The result has been the establishment of projects such as Support for Street Football Developments, which, in addition to tournaments, organizes football trainings for Roma youth in the Transcarpathia region.

‘We train poor children whose families are not able to pay for expensive clubs,’ says Yuri Mandych, who leads the project, ‘There is a district here, where a lot of Roma people live. We selected the children there and they were of course very happy. Many of them had played football before, but only among themselves. Here it is organized, there is someone to teach them.’

The street football tournament started five years ago in Radwanka. At that time, there were only four teams playing. Now there are 56 teams across Transcarpathia. Seven boys were accepted to formal sports schools and they may become professional football players, and in a recent international competition in Slovakia and Hungary, the team from Radwanka took home second place.

Mandych says offering Roma youth the opportunity to travel to new places and learn the Ukrainian language has  enhanced their participation in Ukrainian society. ‘We bring [the participants] out of their settlements and into the world,’ says Mandych, ‘We have two trainers. One of them knows the Romani language, but [football] classes are conducted in Ukrainian. After a year and a half of involvement [in the project], the [participants] begin to understand and speak Ukrainian…It gives them the opportunity to prepare for school. They no longer feel isolated, they do not distinguish themselves, for example, from the circle of athletes.”

The children speak the Roma language among themselves. But since they started playing, they have been getting in touch with other children, and now they really want to learn Ukrainian or Hungarian, depending on which community they belong to.

The project’s goal is to create conditions in which Roma children are better able to socialize with their peers, to alleviate ethnic discrimination. In line with the mission of the broader programme, Support for Street Football Developments has established strategic partnerships with local, regional, and state public offices and officials as well as philanthropy entities and local football federations.

Football is proving to be an effective tool for social inclusion in other parts of the world too. Last month, the Confederation of Independent Football Associations (CONIFA)—a global non-profit organization that supports football teams operating outside of FIFA, for example representatives of de-facto nations, regions, minority peoples and sports isolated territories—held its world cup tournament in London, UK. The winning team was a Hungarian minority from the Zakarpattia area of western Ukraine.

Like the CONIFA tournament, Support for Street Football Developments creates an inclusive environment that aims to alleviate obstacles that perpetuate discrimination.

‘When there is a game, the stadium is full, which means more than 300 people,’ Mandych says, ‘Many people come, it is like a theatrical performance. It is also a big community event, the families of the children are always here, cheering together.’

Comments are closed.
Filed Under: Ukraine