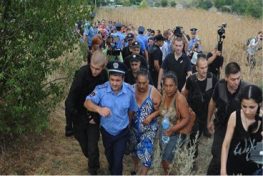 Minority Rights Group Europe (MRGE) calls on the Ukrainian authorities to take urgent and immediate action against the violent targeting of Romani people in Ukraine. On 2 July 2018, a Romani woman was stabbed to death in Zakarpattia Oblast, in what was the eighth incident in less than three months. Though the perpetrators have not yet been identified, the other cases mostly involved far-right paramilitary groups. The most recent attack was carried out just nine days after a stabbing outside of Lviv, indicating the urgent need for immediate action and protection by Ukrainian authorities.

‘The failure of national police to adequately respond to at least eight violent incidents, beginning in April 2018, as well as previous incidents of violence, just few days ago, and harassment involving public officials, is fostering a culture of impunity. The inaction by Ukrainian authorities has allowed for the continuation of ethnically motivated attacks by far-right groups, leaving Roma communities and individuals vulnerable to targeting.’ says Neil Clarke, MRG Europe’s Managing Director.

On July 2, a Romani woman was stabbed and murdered in Zakarpattia Oblast. Though the perpetrators have not yet been identified, the attack was carried out just nine days after the stabbing outside of Lviv, indicating the urgent need for immediate action and protection by Ukrainian authorities.

On June 23, a Romani community outside of Lviv was attacked by a group of young masked men, killing one 24-year-old man and injuring four others, including one 10-year-old boy. So far, eight men have been arrested on suspicion of involvement, most of whom have been identified as members of the ultra-right wing nationalist group, ‘Sober and Angry Youth.’

On 7 June, a Roma community living in an informal settlement in Kyiv were threatened with violence by the right-wing paramilitary group, ‘National Guard.’ The community of 60 persons, including 10 children, were forced to flee after the police failed to provide them with the protection they requested upon receiving the threats.

On 24 May, a lawyer leading the case of a Roma man’s murder by a public official in Kharkiv was physically assaulted in his office by three unknown persons who urged him to stop defending ‘Gypsies.’ One of the attackers was an employee of the Kharkiv Regional Prosecutor’s office. The perpetrators have yet to be detained and there have been no official statements on the attack.

On 22 May, right-wing group members targeted a Roma camp in the Ternopil region with arson and gun violence.

On 9 May, an informal Romani settlement in Rudne, a village near Lyiv, was targeted with arson by an estimated 30 masked individuals. The residents were then forced to flee the settlement.

On 23 April, the home of a Romani family in Kyiv was targeted with arson. The attack was allegedly committed by the extreme right-wing group, ‘Nemezida.’

On 21 April, in what marked the start of the recent series of attacks, an informal Romani settlement on the Lysa Hora nature reserve in Kyiv was struck with violence and arson by roughly 30 members of ‘Sich-C14’, a paramilitary right-wing radical group. After arriving to the scene, the police reportedly failed to protect the families and instead advised them to leave Kyiv.

‘The failure of the authorities to take action places the entire Roma community at risk and is a violation of fundamental human rights.’ says Neil Clarke. ‘The lack of proper follow-up to the incident in Laschinovska further highlights the significant barriers the Roma population faces in Ukraine as a result of widespread discrimination and stereotyping, where a culture anti-gypsyism is entrenched.’

These attacks have been undertaken in a climate of increasing hostility to Roma, which include organized violence and evictions led by public authorities and far-right affiliates. In 2016, Roma residents of the Ukrainian village of Laschinovska were forced to flee following an illegal eviction order by the village authority. Following international outcry, the Ukrainian authorities responded by publicly stating that the incident would be investigated. Nearly two years later, no action has been taken and the seven families have not been able to return to their homes.

‘Organization of security for Ukrainian citizens and effective investigation of all attacks are of great importance for the country. The authorities should understand the danger of impunity of radical group’s actions.’ says Zola Kondur, Vice-President of the Roma Women Fund ‘Chiricli’.‘

We call on authorities in Ukraine to urgently prioritize the creation of the conditions to ensure the security and protection of the Roma population in Ukraine, along with the fulfilment of their human rights. Furthermore, to ensure that investigations of these attacks are undertaken promptly and with transparency, and that the perpetrators are brought to justice.

Ukraine is home to a rich diversity of ethno-linguistic minorities, with not only a large Russian speaking minority, but also Belarusians, Moldovans, Crimean Tatars, Poles, Hungarians, Jews and Roma among others. The Roma population is particularly marginalized and suffers high levels of poverty and discrimination. The European Roma Rights Centre puts the number of Roma in Ukraine at 120,000 to 400,000.

Ukraine rose six places to hold position 17 in MRG’s 2018 ‘Peoples under Threat’ global survey, which ranks countries where communities are most under threat of mass killing or genocide.