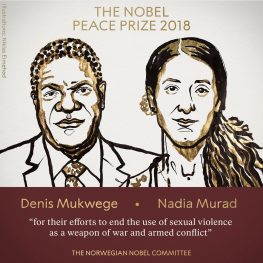 Nadia Murad, a 25-year-old Yezidi woman, has been awarded the Nobel Peace Prize for 2018, along with Congolese gynaecological surgeon Denis Mukwege. Minority Rights Group International (MRG) congratulates both very well-deserving recipients and in particular Murad for her tireless campaigning against sexual violence and on behalf of her community.

‘Nadia’s story and the work she is doing are truly remarkable,’ says Joshua Castellino, MRG’s Executive Director of MRG. ‘She has stood up to bullies and challenged gendered stereotypes at a tough personal cost, in the hope of a better tomorrow. Her recognition with this award will inspire others, especially those far from sites of power who not only face regular abuse, but see their oppressors get away every time.’

Both winners have been awarded for their efforts to end the use of sexual violence as a weapon of war and armed conflict.

Murad grew up in the Iraqi village of Kocho, a quiet agricultural area that had good relations with its neighbours, both Christian and Muslim (including Arab, Kurdish and Turkmen) communities. Nadia attended secondary school and hoped to become a history teacher or make-up artist. Her peaceful life was savagely interrupted when ISIS attacked her homeland in Sinjar with the intention of ethnically cleansing Iraq of all Yezidis. Six of her brothers were rounded up and executed along with all the other Yezidi men. Murad was sold into sexual slavery and repeatedly raped. She spent months in captivity before managing to flee. Following her escape, she chose to speak openly about what she had suffered.

In describing Murad, the Nobel Peace Prize committee says: ‘She refused to accept the social codes that require women to remain silent and ashamed of the abuses to which they have been subjected. She has shown uncommon courage in recounting her own sufferings and speaking up on behalf of other victims.’

‘Nadia winning the prize also brings hope to the Yezidi community towards claiming their rights and acknowledgement of the genocide,’ says Erivan Mahdi, another Yezidi woman activist. ‘Rape and violence against women have become crimes commonly committed in most of the conflicts and wars around the world. The prize is important in that it is targeting a crucial issue. It should help gain the international community’s attention to the most marginalized and oppressed communities and minorities around the world,’ she adds.

In one of her very first public engagements, Murad spoke at the UN Forum on Minority Issues in 2015, after being supported to attend by MRG. Even while the Forum is intended to be a platform for minority representatives, participation is not without risk.

‘Platforms like the Forum are almost the only available opportunity for a vulnerable and poor minority like Yezidis where we can raise our voices,’ says Mahdi. ‘However, when we get back to our countries, we face many problems and questions from our governments. I lost my job after giving my speech in Geneva. But nothing can stop me. They cannot prevent me from looking for my rights.’

Murad also continued to convey her message to governments and international agencies. She became a UNODC Goodwill Ambassador for the Dignity of Survivors of Human Trafficking in 2016 and received the European Parliament’s Sakharov Prize in 2016.

‘Yezidi women appreciate the attention and the genuine sympathy for what they have gone through,’ says Pari Ibrahim, Executive Director of Free Yezidi Foundation. ‘But I can say personally that I have seen very many examples of organizations, activists, journalists, lawyers and others to really manipulate this situation and try to take advantage of the suffering for their own gain, from international people and Yezidi men alike. I have seen many unethical things that have enraged women and survivors. So we implore the international community to not treat the Yezidi women like this is a circus act or a game, to understand that aside from Nadia, there are thousands of others who have urgent needs, and please for everyone to respect ethical and fair treatment of survivors as they struggle to rebuild their lives’.

‘The award also marks global solidarity with the Yezidi community, who have faced some of the worst atrocities imaginable.’ emphasises Castellino. ‘As many Yezidis remain captive or displaced, MRG hopes this prize reminds the world of the continuing dire situation of the community. The Yezidi minority urgently needs protection, justice, access to care and reparations for the harms they continue to face.’

Yezidis are a religious minority, living in Iraq, Syria, Georgia, Armenia, Turkey and now as refugees in Europe. They have faced an estimated 72 genocides during their history. In June 2016, the UN concluded that the atrocities perpetrated by ISIS against the Yezidi community in both Iraq and Syria constitute genocide.