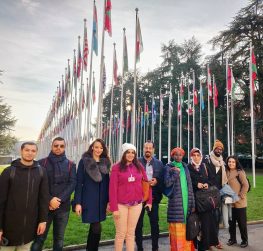 Our Roma partners and friends from the project “Ukraine: Local authorities and civil society organizations together for an inclusive socio-economic development” are taking part in the UN Forum on Minority Issues in Geneva, Switzerland and delivering their statements.

Angelika Kruglyak (Zaporizhia Roma Centre “Lacho Drom”) – has addressed the situation of Roma internally displaced persons (IDPs) affected by the occupation of Crimea and conflict on the East of Ukraine. She stressed that while the numbers of Roma IDPs are relatively low (around 9,000 Roma IDPs according to UNHCR), their situation is extremely marginalised as they experience multiple discrimination by virtue of being of Roma origin, having a disadvantaged socio-economic background and being IDPs.

Julian Kondur (Roma Women Fund Chiricli, during the side event) – has presented short video-testimonies of a Roma family from Transkarpathia in which most of its members do not possess personal documents and of a Roma lawyer working on providing free legal aid to such families. Both testimonies convey the sense that discrimination affects them in many ways, in particular when it comes to their access to the right to nationality. He stressed that this is just one example of what it means to be at risk of statelessness in Ukraine and underlined that the Roma civil society organizations (CSOs) have been rendering support to such families particularly through the work of Roma mediators. He added that the government, while acknowledging the value of the work of Roma mediators and Roma CSOs in this direction, has to strengthen partnerships with the aforementioned stakeholders and other ones, such as UNHCR and OSCE/ODIHR.

Olena Vaydalovich (Chiricli‘s volunteer, participant of the UN Minority Fellows Program) – has addressed the situation of Roma in Ukraine with regard to access to the right to nationality. She stressed the need to introduce a simplified procedure for obtaining personal documents, as the current state of affairs is such that administrative barriers such as court fees as well as a costly medical examination for proving their identity pose a challenge for many Roma in Ukraine, in light of their disadvantaged socio-economic situation coupled with pervasive discrimination as both the root cause and consequence of being at risk of statelessness. In her recommendations, she focussed on the collection of comprehensive disaggregated official data on the numbers of Roma residents in Ukraine and their socio-economic situation, stressing that data should be collected on a voluntary basis and further used to inform the development of viable national and regional public policies targeted towards improving the situation of Roma communities.