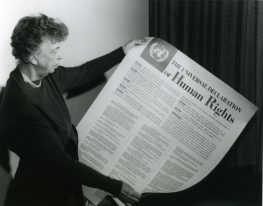 The Universal Declaration of Human Rights (UDHR) turns 70 this week, having been adopted by the United Nations (UN) on 10 December 1948. Proclaimed as a ‘common standard of achievement for all peoples and all nations’, and translated into over 500 languages, the UDHR establishes the interconnectedness and universality of all international human rights.

It has sometimes been dismissed as the construct of Western powers by those who would mask the denial of basic rights to their own citizens behind notions of cultural relativism. However, such challenges willfully disregard the fact that the drafting commission included, in addition to Eleanor Roosevelt, Peng Chun Chang of China as vice-chair, Charles Malik of Lebanon, Hernan Santa Cruz of Chile, and others from Australia, France, the Soviet Union and United Kingdom. The commission drew on a variety of historic and contemporary sources.

In the intervening decades, its promise of equal and inalienable rights for all human beings without distinction of race, sex, language, religion, opinion or location has been the inspiration for evolving international norms. These include the right to life, the prohibition on torture, slavery, arbitrary detention, and the freedom of thought and religion.

But this anniversary comes at a time of gathering darkness. The universality of human rights is threatened by the rise of populists and nationalists who normalize fear of the other to justify hatred and the denial of rights. At the same time authoritarian governments across the world are undermining the foundations of this human rights framework.

This assault on universal human rights should concern everyone, but it is minorities and indigenous peoples who are often at the front lines of such persecution and violence.

Although this anniversary comes at a challenging time when many of the achievements of the UDHR appear to be under threat, it is useful to recall some of the successes in the shared history and struggle for universal rights.

Although Article of 1 of the 1945 UN Charter acknowledges the right to self-determination, when the UN was created the world was still one of colonial empires. Even though some, such as India in August 1947, had recently gained independence as the UDHR was adopted in 1948, from the outset ongoing colonialist oppression posed an existential challenge to the new vocabulary of universal rights and fundamental freedoms.

Not only did the early human rights framework of the UDHR provide a vocabulary for decolonization, but as the nations of Africa and Asia gained independence, their early participation in the UN pushed universal rights as an antidote to the exceptionalism of former colonial powers, such as at the 1955 Bandung Conference and the establishment in 1961 of the Special Committee on decolonization, still in operation today.

This year is also the 70th anniversary of the election that brought the National Party to power on a platform of apartheid in South Africa, where it remained the official policy from 1948 until the early 1990s. The international struggle to end apartheid in South Africa is both a reminder of the universality of human rights and an inspiring example of how, in the face of grave and seemingly intractable rights violations, sustained and coordinated international advocacy can make a difference.

Apartheid in South Africa, so heinous and contrary to the values of the UDHR and the UN Charter, was repeatedly condemned by the General Assembly until its abolition. In 1973, the UN adopted the Convention on the Suppression and Punishment of the Crime of Apartheid, although the United States and a few others voted against it at the time. The international prohibition against apartheid is so firm that it is listed in the Rome Statute of the International Criminal Court as a crime against humanity.

Unfulfilled Promises of the Declaration

Few things in human history are as abhorrent as slavery, and as such the prohibition of slavery and the slave trade is not only laid out in the UDHR, Article 4, but also accepted as a peremptory norm of international law. Sadly, today up to 70 million people languish in some form of slavery. In Mauritania, the last country to abolish slavery, tens of thousands of the country’s minority Haratine population remain trapped in slavery.

Article 5 of the UDHR establishes the freedom from torture, which has been further enshrined in the UN Convention Against Torture and elsewhere. Under international law there are no circumstances whatsoever, in peace or war, to permit torture. Sadly, the use by the United States of torture and enforced disappearances in its so-called ‘war on terror’, and the lack of accountability enjoyed by its perpetrators, has emboldened other nations to carry out gross human rights violations against ethnic and religious minorities in the name of national security.

The freedom of thought, conscience and religion, which includes the freedom to change religion or have no religion, as put forward at Article 18 of the UDHR, is a fundamental right that is enshrined in nearly every country’s constitution, from Ghana to the Philippines. However, today religious intolerance appears on the rise, from the persecution of Christians in North Korea and Muslims in Central African Republic, to Ahmadis in Pakistan and Bahá’í in Egypt.

Persecution based on religious identity often intersects with ethnic minority status and political participation, access to land, or control of natural resources. For example, in 2017 Jakarta governor, Basuki ‘Ahok’ Purnama, a Christian of Chinese descent, was sentenced to two years’ imprisonment for allegedly blaspheming against Islam for quoting the Qur’an to argue Muslims could elect a non-Muslim. In Myanmar, meanwhile, colonial-era blasphemy legislation is now being used to silence or intimidate anyone who might challenge the country’s exclusionary Buddhist nationalists and their campaign against the Muslim Rohingya minority. And in China, the persecution of Muslim minorities, and especially of Uyghurs, has turned the Xinjiang region where they live into a ‘no rights zone’, according to the UN Committee on the Elimination of Racial Discrimination.

One of the perhaps more contentious rights set forth in the UDHR, at Article 13, is the freedom of movement, including the right to leave and return to any country, including one’s own, and the somewhat related Article 15 establishing the right to nationality. The best-known case of the denial of these rights in the past 70 years is that of the Palestinians, but there are other similar cases involving the denial of freedom of movement or nationality, including persons of Haitian descent in the Dominican Republic, Montagnards in Vietnam and Rohingya in Myanmar.

In recent years, it has been the physical movement of people and the digital flow of information that has perhaps sparked the greatest conflicts between minority and majority populations, as rising populists have fanned racial and religious prejudices that threaten the ideals of the UDHR.

A Future for Universal Rights

Arguably, racism, discrimination and bigotry are among the greatest challenges today, along with the increasing assault on the freedoms of expression, assembly, association, religion and the right to privacy. Conflict, resource extraction, climate change and other causes have sparked serious humanitarian crises and population flows at the same time as social media and hate speech has spread disinformation and intolerance, targeting migrants as well as refugees.

As former UN High Commissioner for Human Rights, Zeid Ra’ad Al Hussein, pointed out in 2016, history has taught how effectively xenophobia and bigotry can be weaponized.  In light of this, on the 70th anniversary of the Declaration, it is the responsibility of everyone to stand for the universality of human rights and to exert pressure on those countries that fail to meet their obligations to promote and protect fundamental human rights for all.

Photo: Eleanor Roosevelt, who served as first chair of the UN Commission on Human Rights and oversaw the drafting of the Universal Declaration of Human Rights, displays the document.