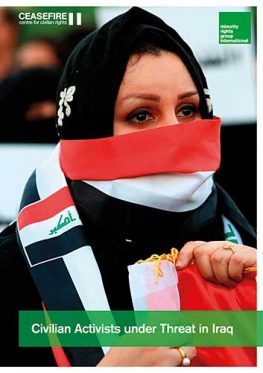 Since July 2018, the outbreak of large-scale popular protests in Basra and other Iraqi cities has led to a wave of violent repression of civilian activists, say Minority Rights Group International and the Ceasefire Centre for Civilian Rights in a new report.

‘The disturbing rise in the targeting of civilian activists has led to a drastic shrinking of civil space,’ says Mays Al-Juboori, Civilian Rights Officer at Minority Rights Group International and co-author of the report. ‘This is especially true for women human rights defenders, who are particularly vulnerable to stigmatization for their activism by both state and non-state actors.’

While the 2005 Iraqi constitution acknowledges the role of civil society and protects freedoms of expression and assembly, relevant legislation in Iraq is outdated and civilian activists remain highly vulnerable. A wide range of activists including protestors, media professionals, lawyers, women in public life and other human rights defenders have been subjected to arbitrary detention, torture and summary killings, including by militias such as those affiliated to the Popular Mobilization Forces (PMF), the Iraqi Security Forces and police. Scores of activists have been killed and hundreds detained.

‘While international attention is focused on the ISIS war, much of central and southern Iraq remains under the grip of Shi’a militias,’ said Ceasefire’s Director, Mark Lattimer. ‘The militias meet any criticism with violence and they know they can kill with impunity.’

The PMF, formed in 2014 as an umbrella for militias fighting ISIS, accorded official status to its 140,000 fighters with the aim of improving discipline and accountability.

In addition to the eleven recommendations for the Government of Iraq in order to address this issue, the report also recommends that the United Nations, donor governments and international development agencies initiate prompt, impartial and effective investigations of corruption in the procurement or delivery of international donor-funded services and development programmes in Iraq.

For more information or to arrange interviews with the authors (Mays Al-Juboori and Mark Lattimer), contact: