Bambuti and Batwa in the shadows of DRC’s flawed election 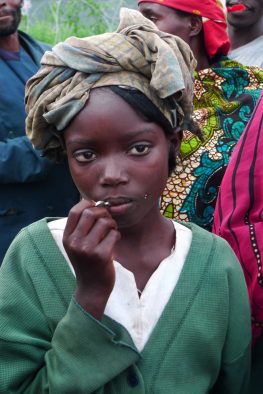 MRG Africa’s Media Officer Hamimu Masudi reflects on the significance of DRC’s recent elections on the Bambuti and Batwa communities, drawing on research by community activists.

The Democratic Republic of Congo (DRC) is theoretically one of the wealthiest countries on earth, however years of misrule have turned this mineral rich central African country into one of the poorest – unable to either deliver basic rights or provide protection to its over 80 million people and their property. But as 2018 closed, there was hope for a turnaround – Congolese citizens went to polls to determine a successor to then President Joseph Kabila, the first time in the country’s history that an election would usher in a new president other than the incumbent and present the country with an opportunity to forge ahead. As well, the elections would determine representatives for the national assembly and provincial councils.

After several upheavals characterized by outbreaks of the deadly Ebola disease, internet blockade, breakdown of voter machines, a gagged press and delayed poll result, Felix Tshisekedi was inaugurated on 24th January as the country’s new president. And despite the ensuing tense post-election climate, DRC managed (at least in the short run) to remain generally stable and avoided sliding back into yet another civil war – after the devastating 1994 to 2003 conflict that claimed some five million lives and displaced millions.

From this election, however, what strikes most for grassroots/frontline organizations working for the welfare of indigenous peoples is the visible and active participation in elections by the main forest-dwelling indigenous communities in the country and the most excluded section of the Congolese people – the Bambuti of the Ituri forest in north-east DRC and the Batwa, located in the lake Tumba region of north-west of the country (as well as along the Uganda and Rwanda borders).

As revealed by Réseau des Associations Autochtones Pygmées (RAPY) and Foyer de Développement pour l’Autopromotion des Pygmées et Indigènes Défavorisés (FDAPID), the grassroots organizations championing the rights of the communities and MRG partners, Bambuti and Batwa were able to register and vote on polling day – with some presenting themselves for elected positions as any other Congolese national. Compared to other communities their participation is a big step towards greater inclusion in the wider Congolese society – with lots of prospects for increased rights protection and respect for their culture and way of life.

In contrast to other communities, Bambuti and Batwa came into the elections against a backdrop of obstacles specific to indigenous peoples in the region and DRC in particular. Though faced by the same harsh reality as their other related indigenous people in Uganda and Rwanda – such as landlessness brought about by state-driven forest delineations (from which hunting is banned) and a lack of integration into contemporary digitalized life, Congolese Batwa and Bambuti have faced unthinkable rights violations dating back to colonial times and through the country’s 49 years of self-rule, and everlasting crisis.

Historically, as MRG uncovered in 2002 and was reconfirmed by many UN and other studies, Bambuti and Batwa peoples have long been the targets of systematic campaigns of violence by various militias, including that of Jean-Pierre Bemba and his Movement for the Liberation of Congo (MLC), which have been accused of carrying out premeditated attacks on the Bambuti/Batwa communities. These armed groups have sought to gain control of their strategic forest territories and the Bambuti and Batwa’s supposed supernatural powers and knowledge of the forest. Added to Jean-Pierre Bemba and his MLC’s violence, continuing attacks by Laurent Nkunda and Rwandan rebel forces outside Bukavu in 2006-7 had grave effects on the communities – characterized by pillage, torture, killings and high incidences of extreme sexual violence targeting Batwa women who were singled out for rape due to superstitious beliefs that having sexual intercourse with them conferred special powers to the rapist.

In current times, concerns persist about issues such as Bambuti/Batwa children’s ability to access their right to education across the region, due to socio-economic obstacles, lack of community support networks, discrimination and the impact of conflict, and the situation of Batwa women and girls, including in terms of exposure to violence. In its 2013 review of the DRC, the UN Committee on the Elimination of Discrimination against Women raised particular concerns about the situation of indigenous women, especially Batwa, around gender-based violence, land rights, access to public services and involvement in decision-making.

As a consequence of repeated violence and marginalization, MRG found out that traditional relationships within the communities had increasingly degenerated into those of exploitation and servitude, sometimes bordering on outright slavery, accompanied by social disintegration and loss of morale, and often by social problems such as alcoholism and prostitution. It is for this reason of ‘near hopelessness’, that campaigners for indigenous people such as FDAPID and RAPY see a silver lining with regards to Bambuti and Batwa’s wellbeing from this election.

However, despite its promises, campaigners want the new government to address the following constraints that would enable the Bambuti and Batwa to enjoy human rights securely:

Conservation of bio-diversity should not come at the cost of indigenous peoples’ rights.

Exploitation of resources (forest, waters, savannahs and minerals) should not alienate indigenous peoples.

DRC’s natural resources represent a huge economic asset, the survival of which has partly been a consequence of the prolonged political instability and economic chaos which inhibited infrastructure development, for instance the viability of commercial logging. But with growing stability and economic growth, the forest will be under greater threat, risking also the social and cultural disintegration of forest-based Bambuti and Batwa. Many indigenous peoples in Africa (such as Sengwer and Ogiek peoples in Kenya, and Benet, Basongora and Banyabindi peoples in Uganda) have been forcibly displaced away from their traditional territories by government and extractive industries, expanding agribusinesses, energy and infrastructural mega-projects without the prior consent of directly affected communities. If they attempt to return to their lands, they are often harassed and arrested for poaching or even – in some cases – killed by ‘eco-guards’.

As a result of their prolonged marginalization, neglect and isolation, most Bambuti and Batwa have not been able to access or stayed away from public spaces, or otherwise could not successfully interact with the electronic voting technologies used in the recent elections. Community activists reported that many lacked the necessary civic awareness to participate effectively in the elections. The government should devise a deliberate plan of action and policies that enable the full engagement in all public, political and civil spheres by the Bambuti and Batwa.

Comments are closed.
Filed Under: Democratic Republic of Congo