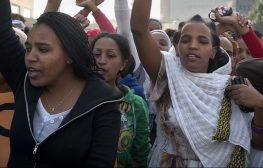 Israel seeks strategic relationships with African governments while the marginalisation of Africans persists within its own borders. Over a year after an attempt at forced removal of African minority groups from Israel, what has anti-immigrant rhetoric done to the people concerned and the country at large?

It was little over a year ago that Israel’s draconian push to rid the country of African asylum seekers made global headlines. Amidst Israel’s current political climate, heated by the recent election of a leader charged with corruption and embroiled in diplomatic tensions, it’s worth considering how the same African minority groups, despite having slid from the 24-hr news cycle, are faring. One thing remains clear: an uncertain future for these groups persists under precarious conditions.

In January 2018, Israeli Prime Minister Benjamin Netanyahu announced that African refugees had three months to vacate the country. Ongoing crises and dire insecurity in sub-Saharan Africa had led to an increase in asylum seekers travelling through Egypt into Israel, 90 per cent originating from Eritrea and Sudan at the time. Describing African refugees numbering around 40,000 in early 2018 as ‘infiltrators’, Netanyahu delivered an ultimatum: Africans could either accept a one-time payment for relocating to another African country, or they could or spend the rest of their lives in jail.

News soon broke that Netanyahu had conspired to make secret deals with at least one African nation, offering military aid in return for the acceptance of deported African refugees. As a signatory to the UN Refugee Convention, Israel is obliged to provide refuge while claims are processed, provide social services and demonstrate a commitment to non-refoulement, making this scheme a direct violation of international law and galvanizing global outrage.

Netanyahu’s statement in January of last year made evident that Israel was not an oasis for asylum seekers. In response, Minority Rights Group International published a piece titled Israel: An Uncertain Future for Thousands of African Asylum Seekers Caught Between Detention and Deportation. A year later, does the situation remain as uncertain?

Fortunately, the mandated mass deportations never materialized. African governments were unwilling to accept refugees forced out of Israel, prompting Netanyahu to reach a deal with the UN aimed at resettling refugees in the West. However, this deal likewise never materialised, as it was considered among many Israeli law makers too lax. Those in favour of rejecting African claimants lamented the fact this deal would allow approximately half of all African refugees to remain in Israel for five years.

It is, of course, good that the predicted mass exodus did not transpire, however, many political commentators and journalists argue that the Prime Minister’s attitude has at least achieved a sanctioned flood of hate. For instance, the four Israelis who attacked Haftom Zarhum, the Eritrean asylum seeker lynched by Israelis in a public place and who died of his injuries, were given an easy deal in 2018 – no jail time, only community service. Two teens who in 2016 killed Babikir Ali Adham-Abdo, a Sudanese asylum seeker, just a year after Zarhum’s incident were relieved of murder charges and convicted of manslaughter. Such cases illustrate wider dangers that befall Africans if they remain in the country. As Canadian journalist David Sheen wrote for Aljazeera last year, ‘When the government’s racist rhetoric is the only frame of reference most folks have for African refugees, they can easily be convinced that, like Palestinians, the Africans deserve to be despised’.

An examination of similarities in anti-foreigner rhetoric might also serve as an explanation for the recent media splash Prime Minister Benjamin Netanyahu and US President Donald Trump have made due to their apparent friendship. The Times of Israel reported that Netanyahu has also praised a wall along the Israeli-Egypt border for its contribution to limiting ‘severe attacks by Sinai terrorists, and something much worse, a flood of illegal migrants from Africa’. This statement is reminiscent of Trump’s hostilities towards asylum seekers south of the US border. An article for The Washinton Post in March 2018 even compared African asylum seekers in Israel to America’s ‘dreamers’ under threat by the Trump administration.

In light of such strong resentment towards Africans, perhaps the most surprising development in the Africa-Israel story is Netanyahu’s recent show of interest in forging connections with African countries on the pretence of diplomacy. For instance, in February 2019, Israel announced it had opened its first embassy in Rwanda. Rwanda was one of the countries embroiled in the refugee-deportation scandal of the previous year, although Kigali has always strongly denied any such agreement.

Despite shelving his most severe anti-immigration plans and bragging of supposed African friendships, Prime Minister Netanyahu continues to make it clear that African refugees are not welcome. Towards the end of 2018, Israel announced that it would not be joining the UN’s Global Compact for Safe, Orderly and Regular Migration, in the name of border protection. Despite the situation of African minorities in Israel not making the headlines frequently as of late, it seems the situation will remain equally as hostile as Netanyahu heads into another term as Prime Minister.

Rowen Siemens is the Communications and Media Intern at Minority Rights Group International. She is currently completing a MSc in Human Rights at the London School of Economics and holds a BA in Philosophy from the University of British Columbia.