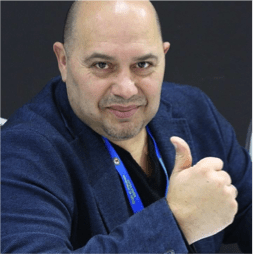 Ukrainian human rights lawyers Yuliia Lisova and Vladymyr Kondur have serious reasons to be happy. The new and important decision of the Administrative Court of Appeal in Odessa was announced just last week, relating to illegal eviction of Roma families from the village of Loschinovksa. MRG talks with Vladymyr Kondur, Head of the Odessa Roma Rights Centre, about what the decision means for the families and for Roma in Ukraine.

MRG: It is important to start from the beginning. What happened in August 2016 in Loschinovka village?

Vladymyr Kondur: In a small village in Odessa region, seven Roma families were living: 28 people, including seven women and 17 minors. Relations had been tense between Roma and non-Roma residents in the village for a longer time, around four years. But the local authorities and the police hadn’t taken any actions to prevent this tension. When in August 2016 a girl was murdered and the suspect was a Roma boy, the local citizens used the situation and stirred up the anti-Roma sentiment. Unresolved tensions developed into the pogrom against the Roma families; they were expelled from the village, and their houses were destroyed.

The main problem was that the police did not take enough action to prevent the situation before and have not done enough to protect the people afterwards. They have suffered and are still suffering both material and non-pecuniary damage.

What is even worse is that the state of Ukraine still does not want to acknowledge its failure. They still say they did everything that they could about it. This case represents a threat to our society because it is an example of important local authorities proving to be incapable of tackling sensitive issues, such as racism and intolerance.

MRG: What have you been doing to bring justice to the families?

Vladymyr Kondur: The Administrative Court of Appeal partially upheld the appeal in the interests of the representatives of the evicted Roma families and adjudicated a new decision by which the Court. First of all, they acknowledged, for the very first time, that the inactivity of the police during the pogrom in Loschinovka was unlawful; there were not enough police to address the issue, to tackle the violence. Secondly, they acknowledged the illegal actions of the Loschinovka village chairman, which were aimed at taking decisions on the eviction from the village of Roma families. Thirdly, they have fined the Loschinovka village council and the Main Office of the National Police in Odessa region non-pecuniary damage in the amount of 10 000 UAH in favour of each plaintiff.

MRG: Why is this decision so important?

Vladymyr Kondur: Considering that there are different cases: the criminal and civil ones, we can use this decision as leverage to push the overall situation. Through the precedent set by this decision we can have an impact on the other cases.

This decision is important not only for the victims of the Loschinovka village, but for all Roma who suffered during other attacks. There are several similar court cases against the unlawful actions of the police in whole Ukraine, and those cases are not going well – they are getting closed down, and the lawyers are appealing them. This case can serve as a good source to contribute to the lawyers’ arguments.

MRG: What arguments did you use in the court?

Vladymyr Kondur: In the argumentation together with Yuliia Lisova, we were using the European Court of Human Rights’ practise. There was a similar situation to the Loschinovka case. In 2002, in the village of Petrivka, also in the Odessa Region of Ukraine, a 17-year-old non-Roma man was murdered, allegedly by four Roma men. The next day, a crowd of village residents gathered and demanded the expulsion of their Roma neighbours. This was 16 years’ ago, and the decision was taken only now. The police’s actions in that case were also unlawful. So, we decided to compare the two cases and draw on the findings of the European Court of Human Rights.

MRG: How do you feel about it and what are the next steps?

Vladymyr Kondur: The case is very important not only to Roma but also to all the ethnic minorities in Ukraine. It contributes to a bigger picture. We are getting ready for the next round of appeal. The state of Ukraine should acknowledge the mistakes it has made in cases like this. At this stage, it is important to note that the court system in Ukraine, at least partly, serves as a mechanism to defend human rights, and that the court acts independently and contributes to the overall democratic process. This is very important to see.

MRG: What should we learn from Loschinovka case?

Vladymyr Kondur: First of all, this case tells us about the necessity of working at the local level: that the local authorities and Roma NGOs, plus other NGOs talk with each other. This is what the project of Charitable Organisation Roma Women Fund ‘Chiricli’ (Chiricli) and you: MRG, is about, right? Active people should have partnerships with the people they live with.

It is also important to know what is happening in each small city or village where Roma live. The main goal is to urge active people to monitor and gather data, and not stay silent in case of trouble. Dialogue should be introduced, and anti-Roma sentiments should be addressed.

Also, from the state’s side: they have to see Loschinovka as a bad example and learn from it. They should implement the commitments they have towards the rights of national minorities. And on the society level, this sad story can teach us, that we should be really tolerant towards each other and accept each other with all our features, peculiarities, imperfections and differences.

On the 8th of May 2019, MRG will launch the new report: ‘Roma in Ukraine – A Time for Action: Priorities and Pathways for an Effective Integration Policy’. The report draws on testimonies of Roma community members, NGO representatives and human rights workers across Ukraine, provided in a series of interviews conducted between January and March 2019. It has been produced in cooperation between MRG and Chiricli, within the framework of the joint EU-funded project ‘A Partnership for All: Developing Strategies for Socio-Economic Cooperation Between Roma Communities and Local Authorities in Ukraine’.