A Message to the World on Our 50th Birthday 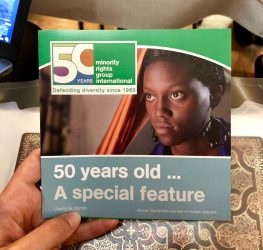 Old wrongs were being righted, but were new problems being simultaneously created?

David Astor, then Editor of The Observer, realised that deep structural schisms lay behind the ethnic conflicts he kept reading about, and convinced a group of like-minded people to support the creation of an organisation that could ‘give voice to the voiceless’. And Minority Rights Group was born.

At this moment in history, new States based on old civilizations were coming into existence in Africa and Asia, fuelled by the opportunity to build their own futures, free from the indignity of colonial rule that drained resources, wounded pride and left masses subjugated. The new States were built on sacrifices by ordinary people desperate for better future: determined to eliminate institutionalised colonial discrimination that made them feel alien in their own lands.

Yet the yearning and attainment of those freedoms witnessed the birth of another demon. Many predicted that the new States welcomed into the global family would flounder. Doomsayers, commencing three decades earlier, had used this as justification for prolonging colonial rule, and at a moment of defeat, they were seen as poor losers. And for the most part, they were. Yet, in not adequately securing the fruits of human rights for all the residents of the new countries, the departing rulers made one more error, limiting the extent to which stable and durable societies would be built.

Irrespective of colonial inaction, post-colonial States had a fighting chance to set things right. They inherited nonsensical boundaries based on intra-colonial competitions that divided some communities, while constructing ‘kin’ among historical antagonists. But surely the struggle and collective bearing of witness to the birth of a new inclusive political entity would wipe away those identity differences as minor irritants and imposed historical legacies?

In the fifty years of the existence of Minority Rights Group it would appear not. Postcolonial governments, usually sitting in the same seats of power, often nurtured the same legacy.

The drive for social justice floundered at the opportunity to build inclusive societies. Ethno-religious or ethno-linguistic identities were selected as the basis for the new imagined communities, and all who were different needed to be wary. Promises of equality were made and enshrined in law, but usually held with a sense of menace above minority communities living in the midst of the postcolonial State. Structures were maintained without white faces: many postcolonial governments proved unwilling to rework governance models to accommodate or celebrate diversity and combat inequality.

For 50 years now MRG has defended diversity, struggling for the rights of minorities and indigenous communities in both old and newly emerging States in every continent. Postcolonial States in Africa and Asia were joined by new States in the Balkans and in the Former Soviet Union. Irrespective of whether they were major powers or Micronesian Islands all enjoyed the benefits of MRG’s focus on minorities and indigenous peoples. Its authoritative reports informed policy makers, inter-governmental organisations, world judiciaries and scholars about situations only known to specialists, many keen to keep these hidden. Undertaken by committed and skilful women and men, the work was inspired by activists and the marginalised. It inspired other activists, marginalised communities, and even some in power still fuelled by the dream of creating dynamic inclusive progressive societies.

The problems are not only ‘out there’ -they never were – but permeate everywhere. Human rights norms are the cornerstone of every State on the planet, but seen by some as constraints. They have been only marginally successful in combatting structural discrimination, probably because they failed to adequately embrace everyone in design and delivery.

Identity politics is everywhere. Usually to exclude: to act as a rallying call for Us to gather in numbers, and exclude Them. Majoritarianism or Populism is on the rise. Misunderstanding democracy as a game of numbers, not values. The ‘art’ of governance – a rich legacy, reduced to a machine-readable algorithm designed to ‘win’ the right to govern through elections, but unencumbered by the knowledge, empathy or wisdom that true governance entails. The result is governance bereft of ideas on combatting climate change and generating full employment in an increasingly mechanized world. Its attention instead, engrossed on scapegoats, engineering interference through social media in lieu of durable solutions to real problems. And we buy this stuff over and over again: taking self-appointed demagogues bereft of skill or values, amplifying their inane utterances and ability to shock, to a bored audience with a finger on an electronic button that can endlessly re-transmit. Kindness, empathy and innovation replaced by anger, aggression and denial, at the behest of boredom.

Yet the struggle is there to be won.

The next generation is more savvy. They understand the implications of climate change. They may not care about group identities and difference, do not understand why it is, at best, no more than an intriguing topic of conversation. Perhaps we are witnessing a desperate grasp by a beaten generation whose hegemony is weakening, clinging to relevance by making this about their ethnicity, religion and language and how it is coming under threat from Others. As if in the end only one culture, religion or language can prevail.  But if Others have the answer to climate change, know how to create jobs for the masses and can govern with empathy, kindness and innovation, do we care what their lineage is? Knowledge emphasizes our similarities, but are we to be angered by our differences? Even when these differences make us collectively a richer civilization with our array of heritage, languages, religions and perhaps even solutions to our current impasse?

Whatever the next fifty years may hold, we need to understand the value of getting all of humanity engaged – to the extent they wish to be – in addressing big and small problems. Governance is too important to be left to rogues and mavericks armed with resources, opinions and an ability to shock.

Our message to the world is simple.

Get involved: think about how you consume, how you commute, who represents your values, and what you can do about injustice. If you see a gap, acquire the skills and step into it. Ignore the ambient noise: we have enough soap operas to follow without needing to follow utterances of people who are not even trained entertainers. Had we done this we would have avoided the infamy of the skill-free personalities that masquerade as our ‘leaders’. And societies may have already become more sustainable and inclusive with debate about substantive options over future directions, not ill-founded hyperbolic wars expressed in 140 characters where everyone is speaking and no one is listening.

Build sustainable inclusive societies: the opportunity looms, just as it did for those decision makers in 1969. This time it is urgent, because we need all of human capability to restore the harm being done by the few – to the environment and to our social fabric. Where will you stand – with an angry fake ‘majority’ built on misrepresentation? Or with those committed to progress?

We hope you will stand with us and our partners in defending diversity and designing a more equal future.

Joshua Castellino is the Executive Director of Minority Rights Group International (MRG). To find out more about MRG’s 50-year history, visit our timeline and see the anniversary website here.