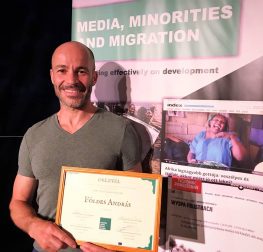 András Földes, a journalist at Index.hu is awarded this year’s Development Journalism Award 2019, an award founded by Minority Rights Group Europe and which launched this year. Honourable mentions were rewarded to Eszter Neuberger and Boróka Parászka, journalists at Abcúg and 168 Óra, respectively, and photojournalist András D. Hajdú.

“The media plays a vital role in society and is hugely important for MRG’s work to secure the rights of minorities and indigenous peoples around the world,” said Neil Clarke, Managing Director of Minority Rights Group Europe. “This award seeks to highlight achievements in this field and congratulate those working hard to produce high-quality journalism.”

The award was granted to András Földes, a journalist at Index, who applied with five video reports, produced in Kenya, Libya and Vienna (available here: 1, 2, 3, 4, 5). According to the evaluation, his work is exceptional. He uses a wide range of journalistic tools in a way that deepens his understanding of topics and produces excellent balanced reports that provide great insight into the stories he covers. The jury emphasised that although he works mostly alone in the field, the work of editors is also needed to achieve high quality.

“I am very happy for this prize, but I am even happier because such projects exist that indicate to journalists that even in a very difficult media environment, it is worth to cover difficult topics”, András Földes said.

Photojournalist András D. Hajdú applied with a photo essay published in National Geographic Hungary, with his photos appearing in several other reports as well. According to the evaluation, his photography plays a key role in each story as they provide a lot of added information and emotion beyond the text.

Eszter Neuberger, a journalist at Abcúg, applied with three reports. According to the jury, all of them represented very high-quality journalism, but a highlight was her report on the Roma in Bulgaria (with photos by András Hajdú D.). As the jury said, ‘positive stories are rarely so powerful as this one.’

The jury found the report on the Rohingya by Boróka Parászka, published in 168 Óra a very moving and powerful piece that also gave an excellent background to the story. It was a well-written, thorough and interesting report, which documented a terrible historical event with high quality.

In their evaluation speech, the jury members said that these media pieces put several stories in a new perspective. Since these stories are hardly visible in today’s media, with the words of Gábor Polyák, these pieces are extremely important and they hope that they will reach a big audience.

“We, as the jury members, had to pause after reading or watching every story, because we had a lot to talk about.” Gábor Polyák emphasised. He also mentioned that it is difficult for journalists to cover such stories, and journalism has more and more become a desk job, only a few go on the field.

“The majority of the applications represented a very high quality. I was very happy about the fact that 40% of the applications were video reports, which means an important step in journalism tools.” Ilona Móricz said. At the same time, she lacked the usage of diverse journalistic tools in a few cases.

According to Gergely Dudás, it is not only a cliché that ‘the jury had a difficult task’. He emphasised it is not easy for journalists covering such topics, as they face a general media environment and an editorial climate that is not favourable for them. In addition, it is not only the media that shifts the responsibility, but also consumers, so these issues are often put aside.