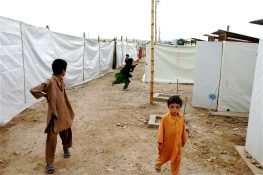 Pakistan remains in the top ten in our Peoples Under Threat ranking: situated 9th in the world, it sits sandwiched between Ethiopia and Yemen.

The past year has not been good for minorities in Pakistan.

Most recently, a Hindu vet was charged with insulting Islam and had his clinic burned down by village vigilantes—all for mistakenly using pages from a religion textbook to sell his medicine.

In Baluchistan, the Hazara community faced a fresh attack in April 2019, when a blast in a central marketplace in Quetta killed over 20 people. The Hazara community lives in besieged enclaves, surrounded by army checkpoints to protect it from Sunni extremists. ‘It’s like living in a cage’, one community member says.

Last summer, Prime Minister Imran Khan drew on right-wing rhetoric in a bid to win votes by endorsing the blasphemy law. ‘We are standing with Article 295c and will defend it,’ he told a rally, referring to the harsh penalties constitutionally imposed for those charged with the crime of committing blasphemy. It is precisely this law that has so deeply impacted religious minorities in the country: discrimination, in effect, is institutionally imposed.

This discrimination is particularly problematic when it intersects with other types of exclusion, exemplified, for instance, by Hindu brick kiln workers in Sindh, and Christian sanitation workers in Punjab, Karachi, and elsewhere. The marginalisation hits minority women the worst: with the conjuncture of economic exclusion, gender inequality and religious intolerance, they are amongst the most vulnerable groups in the country.

Pakistan features heavily majoritarian nationalism, a facet that provides fertile ground for the exclusion of minorities. Though the country was founded on the principles of equality—the Constitution guarantees it, the state has ratified most key treaties, and the national flag represents it—there is little resolve and political will to address the concerns of minority groups.

However, amongst all this we saw some positive news this year: Asia Bibi, a Christian woman convicted of committing blasphemy in 2010, has finally been cleared of her charges, has managed to leave Pakistan, and is now living in safety. Asia Bibi has spent nearly a decade on death row after being accused of insulting the Prophet, an accusation she has consistently denied as false.

Still, while the news of her case is certainly positive, Bibi is just one success story: many others, both Muslims and non-Muslims, remain either on death row or sentenced to life imprisonment.

The dismal condition of minorities is not particular to Pakistan: across South Asia, religious groups face long-standing social, economic, and cultural marginalisation.

In India, there has been a rise in vigilante violence since the election of the BJP in 2014, particularly targeting Muslim and Christian populations.

In Bangladesh, political instability and the entrenchment of an increasingly narrow understanding of national identity has similarly undermined freedom of religion and belief.

In Sri Lanka, violations of religious minority rights and discrimination have inhibited the country’s transition to peace. Christians and Muslims face violations of freedom of religion including hate speech, discriminatory practices, destruction of property, threats and intimidation, and physical violence perpetrated by both state actors and Buddhist nationalist groups such as Bodu Bala Sena.

Aspects of Nepal’s new Constitution (as of 2015) have a discriminatory impact on the country’s religious minorities, in particular, Muslims and Christians who have reported fears of rising hostility in recent years.

In Bhutan and the Maldives, efforts to homogenize society have severely curtailed freedom of religion or belief, and even the ability of non-Buddhists and non-Muslims, respectively, to acquire citizenship.

The need to monitor incidents of hate, to engage grassroots activists, and to highlight the conversation on an international level has steadily grown.

To tackle this, MRG has taken on a new project supporting religious pluralism across South Asia. With the support of the South Asia Collective, we, along with our partners, will produce authoritative research on the issue, strengthen the capacity of civil society organisations working on it, and conduct advocacy both on a regional and international level.