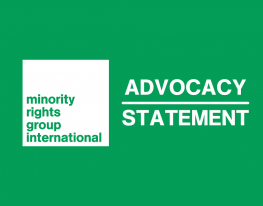 Minority Rights Group, Christian Solidarity Worldwide, Avaaz and the Institute on Statelessness and Inclusion call the attention of the Council to the imminent risk of over 4 million persons being made stateless in the Indian state of Assam, at the end of this month.

The process of updating the National Register of Citizens of India, to determine who is a citizen and who is not, has been ongoing in Assam for years, and will culminate on 31st July, with the publication of the final list.

The process to update the NRC has proved opaque, discriminatory and arbitrary, despite the oversight of the Supreme Court of India. A draft list published in 2018 left behind over 4 million persons, with a disproportionate number of persons belonging to linguistic and religious minorities excluded, in particular Bengali-origin Muslims. The appeal process has been marred with due process challenges, providing little recourse to those most vulnerable.

The communities who risk being arbitrarily deprived of nationality and made stateless also face a broader climate of growing anti-Muslim hostility in India, that is increasing their vulnerability in this process. Hate speech towards vulnerable minorities is coming from elected politicians and exploding on social media like Facebook, WhatsApp and Twitter.

Even though the NRC appeal process is still ongoing, it is estimated that over a thousand individuals excluded from the NRC are already in 6 separate prison camps, languishing as so-called “foreigners”. They have been detained in cruel, inhumane and degrading conditions, pending an hypothetical deportation from their own country. A massive new 7th prison camp is under construction.

Five UN Special Procedures have submitted a series of communications to the Government of India, warning of a potential humanitarian crisis and raising concern at the process and at the expected outcome. To date, these communications have remained unanswered.

We remain extremely concerned for the fate of those who will be excluded from the final NRC list at the end of this month, with the very real prospect of mass arbitrary detention, and millions at risk of statelessness.

This Council has repeatedly proclaimed its attachment to the right to nationality, and its rejection of arbitrary and discriminatory deprivation of nationality. In line with these principles, we urge the Human Rights Council to recognise the urgency of this unfolding situation and to impose upon the government of India, its obligation to avoid the humanitarian and human rights crisis that is imminent, unless the NRC process is – even at this late stage – implemented in a non-discriminatory and non-arbitrary manner, with full regard to due process rights and a commitment to protect the right to a nationality and to avoid statelessness.