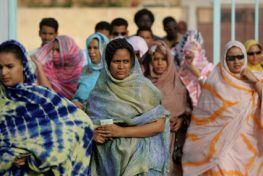 On July 25th, 2019, the UN Human Rights Committee (HRC) released its new periodic report on Mauritania’s compliance with the ICCPR.

MRG, with its partners ASI and SOS, had submitted a shadow report to the Committee before its initial review of Mauritania and had provided key and detailed content through its expertise on international minorities’ rights, discrimination and slavery in Mauritania. This shadow report has been reflected in the HRC periodic report, which MRG and its partners welcome.

The HRC has noted the effort made by the Mauritanian Government to set a legal framework against slavery. However, the Committee highlighted crucial concerns, which are as follows:

Regarding the plight of slavery, the HRC is concerned with the implementation of the legal framework and has noted the persistence of slavery and prejudices firmly rooted in certain traditions. It has also noted the lack of data to measure the extent of this practice, and the difficulties that victims of slavery face when filing a complaint to assert their rights with the police and judicial authorities. These difficulties include the continuing challenges in investigating such cases, and independently, effectively, and impartially prosecuting the perpetrators of such practices, and punishing them adequately. The difficulties also include the insufficient resources allocated to the operation of the three specialized courts in Nouakchott, Nouadhibou and Néma.

Regarding freedom of speech and freedom of association, the HRC was further concerned about reports of intimidation, harassment and arbitrary detention of human rights defenders, and was especially very concerned by the case of Mohamed Cheikh Ould Mkhaïtir, who was initially condemned for criticizing the use of Islam to justify racial discrimination and slavery, but after serving his sentence remained in administrative detention sine die. The HRC is concerned that such acts may create a climate that prevents the critique of human rights violations, including those recognized in the Covenant (articles 2, 6, 7, 14, 18, 19, 21 and 22).

More recently, MRG published a joint press release with 9 other NGOs (3rd July 2019), about Ahmedou Ould Wediaa, a prominent anti-slavery activist, journalist and member of the opposition party (Tawassoul) in Mauritania, who was arbitrarily arrested during a police raid at his home following his statements criticising the authorities’ response to the election-related protests, and in particular to the mass arrest of foreign nationals. In the meantime, MRG sent an official communication to the Special Rapporteur on Minority Issues to share its deep concern about freedom of speech for human rights activists.

The Committee noted the prior authorization system required by non-governmental organizations and human rights associations in Mauritania, and observed how administrative obstacles in obtaining such authorization have forced them to operate in hiding (Articles 9, 19, 21 and 22). The committee therefore issued the following recommendations:

As for the discriminations, the Committee remains concerned at the persistence of certain traditional social structures and cultural prejudices that continue to fuel racial discrimination and the marginalization of Haratines and Negro-Africans (Halpular, Soninké and Wolof), particularly in access to education, employment, housing, health and social services, and land and natural resources. The Committee is also concerned that the representation of these groups in political and public affairs remains very limited, particularly in positions of responsibility and decision-making in fields such as the administration, the army, and the police; elective positions at the national level, as well as in the private sector; and in the media (articles 2, 25 and 26). Such discrimination is also visible under gender equality. Indeed, the representation of women, and in particular that of the Haratine and Black African women, remains insufficient, especially in the judiciary, diplomacy and the high functions of the public administration.

The Committee took the following recommendations on these specific points:

The Committee has made very strong recommendations against Mauritania following our report’s data and suggestions. Once more MRG and its partners welcome the HRC report for highlighting the crucial and urgent need for improvement and access to justice for all in Mauritania, and remain hopeful that the authorities will adhere to these recommendations and implement them fully with the support and inclusion of civil society.

Link to the concluding observations

Link to our shadow report

Link to our note on the submission of an alternative report

Link to our article on Ahmedou’s arrest