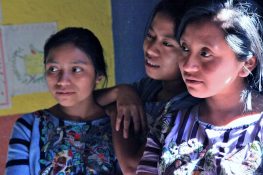 Every year, August 9th commemorates the International Day of the World’s Indigenous Peoples. It is celebrated all around the world and marks the date of the first meeting of the UN Working Group on Indigenous Populations of the Sub-Commission on the Promotion and Protection of Human Rights in 1982.

As the United Nations proclaimed 2019 as the International Year of Indigenous Languages, today’s celebration is dedicated to this fundamental part of indigenous peoples’ lives.

Languages are often seen as a mere tool for communication; however, they play a crucial role for the preservation of communities’ identities. Languages carry knowledge, history, traditions, biodiversity, and they contribute towards our collective and individual sense of identity, as well as towards the world’s cultural richness.

It is estimated that about 7,100 languages are currently spoken worldwide, of which approximately half will disappear by the end of this century. Most of these endangered languages are actually spoken by indigenous peoples and minorities. The extent of this risk and the pace of this process of language endangerment (or even extinction) may vary according to several factors, such as number of speakers, community fragmentation and quite importantly, social, economic and political factors.

Although it might seem to many a purely linguistic issue, it is not. In fact, causes of language endangerment are largely political, social and/or economic and they are often interrelated with issues of inequalities. In most cases, the forces that give rise to social margin­alization are the same ones pushing towards language shift, since speakers find the use of another language more appropriate, whether socially, economically and/or politically.[1]

This may concern matters like access to resources, such as healthcare. In Guatemala, for example, it is a legal right to have access to healthcare services in indigenous languages.[2] However, in reality, Spanish tends to be the only language available, thus making it difficult for rural Mayans to access healthcare facilities, not to mention the psychological effects in terms of self- and language perception. In fact, simply being a native speaker of a minority or indigenous language may lead to discrimination, pushing the speaker to think twice before using his or her language or to even develop a negative attitude towards it.

Language endangerment is also connected to more obvious issues, such as diaspora and internal displacement, to which often indigenous peoples worldwide are exposed due to conflicts, including conflicts over their natural resources. Fragmented communities are more likely to lose usage of their language. Finally, we should not forget that there are also communities worldwide that are still prevented by law from using their native language in certain settings.

With this in mind, the documentation, protection and revitalization of indigenous languages becomes an essential activity, since several indigenous endangered languages are actually undocumented oral languages.

Article 13(1) of the UN Declaration on the Rights of Indigenous Peoples states:

Indigenous peoples have the right to revitalize, use, develop and transmit to future generations their histories, languages, oral traditions, philosophies, writing systems and literatures, and to designate and retain their own names for communities, places and persons.

There are different levels of language endangerment, with UNESCO classifying languages on a spectrum as safe, vulnerable, definitely endangered, severely endangered, critically endangered and extinct. But there are also several things that we can do to halt or revert this trend.

Nowadays, there are in fact different ways to support language revitalization. One that has been proven to be particularly successful is language nests, originally developed in New Zealand in the 1980s to revive the Maori language and now used in other countries all over the world. Language nests are immersion schools for early-childhood where the elders provide care while using their native language. Studies have shown how these techniques contributed to increase percentages of speakers over the decades, therefore reverting the predicted trend of extinction.

Whatever revitalization method experts might choose to follow, according to local circumstances, two interrelated factors cannot be overlooked. First, language is not an isolated phenomenon, hence the importance of taking into account the social, political and economic realities of the minority and indigenous group(s). Second, language revitalization should be the decision of the community and terms and methods should be negotiated with the native speakers, with particular attention given to women as they often are the main carriers of culture.

Indigenous peoples’ control over their language is not only the most sensible choice, as they are or will be the people speaking the language, but it is also a prerequisite for reinforcing the speaker’s sense of ownership and pride towards his or her cultural heritage. Along with a shift in psychological perception, language revitalization can also be a force for social and economic change, being a long-term and large-scale effort that affects the quality of everyday activities and interactions that are, ultimately, language-related.

As stated by UNESCO, the linguistic rights of indigenous peoples must be an integral part of the human rights agenda.

[1] Henderson, Rohloff and Henderson, More than Words: Towards a Development-Based Approach to Language Revitalization (2014).

[2] There are almost 30 indigenous languages spoken in Guatemala, most of which are Mayan languages.