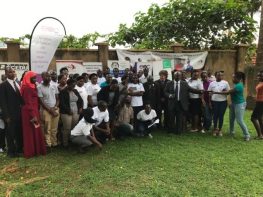 One of the highlights of the celebration was a media conference that was addressed by several speakers, each calling for inclusion in the national education curriculum, the teaching of indigenous languages and for the protection of languages through community based cultural heritage centers.

In a keynote address, MRG Africa Regional Manager, Agnes Kabajuni underscored the significance of this year’s theme and asked stakeholders to stand with indigenous peoples in raising awareness about the dire need to promote, protect and preserve the languages of indigenous peoples in Uganda.

’The National Curriculum Development Centre’s policy on local languages needs revision,’ said Kabajuni. ‘Recognizing the teaching of at least nine languages of dominant ethnic groups inadvertently impacts negatively on the growth and revitalization of languages of indigenous peoples,’ She explained, citing the use of the Lukonjo language in Kasese schools and its effect on  indigenous Basongora and Banyabindi languages as an example.

Indigenous communities were represented by the Ike, Maragoli, Bamba, Banyabindi, Benet and Batwa. They expressed appreciation for continuous support from IMG Coalition Members on advocacy efforts and protection of indigenous communities in Uganda. They requested the State Minister for Gender and Culture, Hon. Peace Mutuuzo, in her capacity as the guest of honor, to be included in the national service delivery and in the Constitution of Uganda like other tribes. According to Shabun John from Maragoli community, many indigenous peoples such as the Maragoli and Benet, are not included in the Constitution; a situation that prevents them from accessing services such as appropriate education and healthcare compared to Uganda’s majority population.

On their part, representatives of CSOs requested the government to conduct a proper and full inventory of all indigenous peoples in Uganda, stressing that documentation and increased sensitization will preserve and promote indigenous languages. Additionally, CSOs called for the preservation of culture and customs of indigenous communities in Uganda.

According to the CSOs, indigenous communities have no representation in the local governments and have been sidelined in accessing national services and resources. When it comes to education, most of the indigenous communities are marginalized because the languages of instruction in schools are alien and only applicable to predominant tribes in respective geographical locations.

In her closing remarks, the State Minister for Gender and Culture in the Uganda Cabinet recommended that the coalition of Indigenous Minority Groups appeal to the Speaker of the National Assembly on issues affecting indigenous communities in Uganda. She accepted a request by the Bamba community to organize a meeting with the Prime Minister of Uganda to discuss how to best promote the fishing business of the community. According to the Minister, the ministry has secured funding from UNESCO that will help in documenting all languages in Uganda, allowing a full picture of how many are currently spoken and how to best protect them.