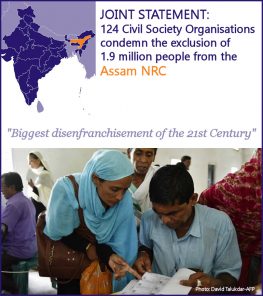 On 31 August 2019, the Indian state of Assam published the final version of the Assam National Register of Citizens (NRC).

An act of mass deprivation of nationality, the NRC excludes 1,906,657 residents – approximately 6% of the population of Assam – thereby pushing them to the brink of statelessness.

The biggest mass-disenfranchisement of the 21st Century

Joint Statement: 125 Civil Society Organisations condemn the exclusion of 1.9 million people from the Assam NRC and call for urgent action to protect everyone’s right to a nationality

On 31 August 2019, after a long-drawn out process, the final version of the Assam National Register of Citizens (NRC) was published. 31,121,004 residents of Assam were included in the NRC and therefore recognised as citizens, whereas 1,906,657 residents – approximately 6% of the population of Assam – were excluded, pushing them to the brink of statelessness.

Further to a 2014 Supreme Court Order, in 2015, the Assam state government announced it would initiate a process of updating the NRC, requiring every person in Assam who claimed Indian citizenship, to submit proof of their ancestry (or birth) in the country pre-dating 1971, the year that Bangladesh was formed. This process arose out of a history of xenophobia and discrimination against both Indian and non-Indian migrants of Bengali ethnicity, with Muslim Bengalis being the most disproportionately impacted. Women who are less likely to be literate or have documentation due to societal prejudices and norms and their children have also been excluded. The immense pressure that this process has placed on individuals and their families, including the cost of applying and appealing, the loss of work, the strain on family life, the emotional and psychological impact, the loss of liberty through detention and the rise in hate-crimes and hate-speech, is extremely worrying. Local NGOs have reported that the NRC process has already claimed the lives of a number of people who have died by suicide.

The failure to implement adequate procedural safeguards and the consequent arbitrariness of the NRC process has also been a significant concern. Further, while India claims that those excluded from the NRC are not yet stateless, they are undeniably at extreme risk of imminent statelessness, as they have effectively been stripped of their citizenship, with a 120-day window to appeal. International law prohibits the arbitrary deprivation of nationality and obligates states to avoid statelessness, while guaranteeing the right of every child to acquire and preserve their nationality and to be protected from statelessness.

Despite mounting evidence that this process would result in a human rights and humanitarian catastrophe and repeated calls to action by UN human rights mechanisms, including a number of special procedures mandate holders, the failure of the international community over the last two years, to exert sustained pressure on India to reverse the process, shows that little has been learnt from the Rohingya crisis or the many crises before.

The finalisation of the NRC coincided with the halfway mark of UNHCR’s iBelong Campaign to end statelessness by 2024. It came just 37 days before state representatives are to congregate at the High-Level Segment on Statelessness in Geneva, to make further pledges towards ending statelessness. We call on all states and institutions of the international community to use the platform provided by the High-Level Segment to call out India’s arbitrary and discriminatory actions and to recapture the spirit in which the right to nationality was first included in the canon of human rights – as a safeguard against inhuman horrors.

Although the lives and years lost can never be reclaimed, it is still not too late to reverse what now seems an inevitable outcome of mass-disenfranchisement. But it will require extraordinary political leadership within Assam, India and globally, particularly in a context in which the politics of demonization are taking centre stage. It is for the people of the world to provide moral direction to their representatives and demand better of them. And so, as members of the global community, we join our voices to demand better off states and of the UN. The international human rights standards that bind us together by protecting us all, demand that governments and multilateral institutions take bold action.

The exercise of collective responsibility in defence of human rights is critical to averting a crisis manufactured by one country, which has global significance and resonance.

In particular, we urge the international community to exert pressure on India to:

Filed Under: Asia and Oceania, India