Minority Rights Group > News > Uncategorised > The Turkish minority in Greece must be recognized and free to enjoy their rights, says new report

The Turkish minority in Greece must be recognized and free to enjoy their rights, says new report 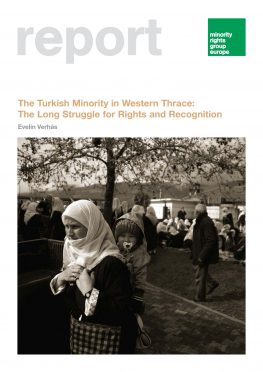 Greek authorities must take immediate steps to recognize the Turkish minority in Western Thrace and remove all barriers to the full enjoyment of their rights, says a new report published today by Minority Rights Group Europe (MRGE).

The barriers confronting the Turkish minority in Western Thrace, the region in Greece that borders Turkey and Bulgaria, and where the continents of Europe and Asia meet, have increased further in the recent decades. Western Thrace has long been home to a significant minority community of about 140,000 Muslims of predominantly Turks. To this day, however, Greece does not acknowledge the existence of the Turkish minority in Western Thrace, creating a wide array of human rights issues.

‘It is estimated that almost half of the population of Western Thrace is ethnically Turkish – but to this day they are denied the right identify themselves as such’ says Neil Clarke, MRG’s Head of Legal Programmes and Brussels Advocacy. ‘The community is still officially recognised by Greek authorities as the Muslim minority in Western Thrace. While associations with Pomak and Roma names exist in the region, there is no association having the word “Turkish” in its title. This denial of the right to identity, cannot continue. The situation of the Turkish minority in Greece should be considered one of the most serious violations of the rights of minorities in the European Union.’

The continued non-recognition of the Turkish minority’s collective ethnic identity has many implications, including restricted freedom of religion, lack of access to education in their own language and the rise of hate-motivated attacks by far-right groups against the community.

The report outlines the historical and contemporary details of these implications, including Greece’s history of minority education regulation, and its obligations as a member of European Union. It goes on to present findings from first-hand field research, which included consultations and interviews conducted with members of the Turkish minority, religious leaders, representatives of minority schools, teachers’ association, civil society organizations, local experts and mayors.

‘Our grandparents died for Greece!’ Ozan Ahmetoglu, Chairman of the Xanthi Turkish Union, told MRGE while presenting a list of deceased persons on the wall of the association. ‘We wish to work with Greek citizens to improve the situation in all fields, but together, with respect and not up-down approach. It is time.’

The report includes MRGE’s recommendations to the Government of Greece, divided into three fields: minority protection and recognition issues, freedom of religion and minority education.

‘Human rights are rather a floor, not a ceiling, and it is important to emphasize that once state protection has gone beyond the minimum human rights standards, it is discriminatory to eliminate or roll back any rights that are already in place- unless there are exceptional circumstances.’ underlines the report, which aims to bring international attention to the struggles of the Turkish minority in Western Thrace.

For further information or to arrange interviews please contact: