Minority Rights Group > News > Asia and Oceania > Sri Lanka > Six months on, there is still no accountability for attacks on refugees and asylum-seekers in Sri Lanka – new report

Six months on, there is still no accountability for attacks on refugees and asylum-seekers in Sri Lanka – new report 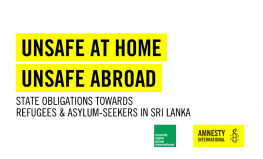 There has still been no police investigations into the threats and violence faced by refugees and asylum-seekers in Sri Lanka in the aftermath of the Easter Sunday attacks, Amnesty International and Minority Rights Group International said in a new report published today.

In the days after the Easter Sunday massacre – when an armed group killed more than 250 people in three churches and three hotels – mobs mounted reprisal attacks on refugees and asylum-seekers from Pakistan, Afghanistan and Iran. Even after they sought shelter in nearby community centres and a police station, they continued to come under attack.

“The refugees and asylum-seekers in Sri Lanka who came under attack have had a trauma visited upon them twice. They were first forced to leave their own countries, and now, in the country where they sought safety and shelter, they have had to leave their homes once again. They languish in limbo, still fearful for their safety and uncertain of what is to come.“The Sri Lankan authorities must make clear that violence against ethnic and religious minorities, particularly refugees and asylum-seekers, will not be tolerated and that anyone suspected of criminal responsibility for attacks against them will be brought to justice in fair trials.”

“The attacks against these refugees and asylum-seekers have yet to be investigated and no-one has been held accountable. The Sri Lankan authorities must uphold their international obligations to protect their human rights and the international community should expedite their resettlement process for those who are eligible so that they can finally find safety and their ordeal can come to an end.”

Fearing for their lives

The report details several instances where refugees and asylum-seekers were confronted by angry mobs in the days that followed the Easter Sunday attacks.

Two days after Easter Sunday, a mob of “four or five men” showed up at the home of Farhan*, a Kashmiri from Pakistan-administered Kashmir. He said: “They told us to leave. They hit us. Our landlord stopped the guys. He told them to let us go. They were shouting at us in Sinhalese, telling us to leave the country.”

Naila*, a Pakistani Ahmadi refugee, had found sanctuary in a community centre after being forced to leave her home with her family. There, witnesses said, passers-by were told to stop and join an assault on the community centre. The mob began throwing stones at the community centres, striking near where Naila and her family were. She said: “You cannot imagine how we spent those two to three hours. Only God saved us that day.”

The refugees and asylum-seekers said they continued to face discrimination after the attacks.

James*, a Pakistani Christian asylum seeker, said: “We can’t live here. From a rickshaw driver to a doctor, we’re not treated as human beings. They tell us to leave.”

An Afghan refugee activist said: “Now the people of Sri Lanka see refugees as a threat, no longer as [guests]. These people treat us like this because they don’t know what a refugee is.”

Forced from their homes, many refugees and asylum-seekers squeezed into the garage of a police station and into community centres, where they lacked beds to sleep in, food to eat, adequate healthcare and sanitation facilities. At the Negombo police station, around 160 people spent nearly 30 days in appalling conditions. The refugees and asylum-seekers were eventually moved to a camp in the north of Sri Lanka.

The MRG portion of this report was researched and drafted by an Colombo-based researcher, Annemari de Silva.