An African perspective on migrants and migration in Senegal 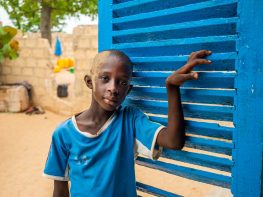 Photo: A child pauses for a photo in Saint Louis, Senegal. © Jana Cavojska

Travelling across the continent can be an enormous endeavour! Even via aeroplanes, the world’s safest and fastest means of transport, the journeys are usually hard to endure – not with the daunting lengthy flights and overwhelming waiting periods during connections.

But then again, with its diverse cultures and geography, travelling in Africa is a sensational experience; as an African, it always feels like homecoming! That was the feeling that overcame me on arrival in Senegal – with a team of journalists from Eastern and Central Europe, on a mission to explore some of the many personal stories of migration in Senegal.

From a personal point of view, the visit felt more of a “stopover” at a familiar place – a place where the majority of African people remain in-need amidst plenty, where an army of youth are in disguised employment, where children loiter the streets instead of attending classes, while others play street soccer, not for recreation purposes per-say, but with hope that one-day they will grow into professionals and ply their trade in one of Europe’s best football leagues.

It is no surprise therefore that, among Senegalese – like I can approximate elsewhere on the continent, there is “a very strong prevailing desire to emigrate.” This is according to Papa Demba Fall (PhD), Senior Researcher and Director of the, Network for African International Migrations Studies at Fundamental Institute of Black Africa, University of Dakar. In his study, “Imagining Europe from the Outside” (EUMAGINE), Papa Demba Fall, found that 3 in 4 Senegalese would emigrate – with Europe being the most coveted destination.

Unlike the other members of the Economic Community for West African States (ECOWAS), Senegal has been categorized as country of “origin” but also “transit” and “destination of undocumented migrations in the region.” Meaning that, undocumented migrants heading towards Europe (and other popular destinations) start their journeys in Senegal. Under the same token, Senegal provides intra-Africa migrants opportunities to work, as well as a transit point for intra-African migrants, whose main destination is Europe. Through a complex web of hubs – spread along the Atlantic coastline and notable trade routes and centers strewed across main-land Africa, undocumented migrants are able to navigate towards Europe’s gateways.

Currently, the most alarming trend threatening to alter or intensify migration in Senegal and the entire ECOWAS region is climate change. The widespread degradation of soil by human activities and climatic variations, has been so devastating that in 2007, the African Union – together with the United Nations Convention to Combat Desertification (UNCCD), launched the Great Green Wall for the Sahara and Sahel Initiative (GGWSSI) – an ambitious 8-billion-dollar project with a goal of restoring Africa’s degraded landscape by planting a “wall of trees” from the Gambia-eastwards, via Senegal and across 20 other countries on the continent. This initiative is probably one of the greatest shows of political will that Africa is ready to play its role in mitigating climate change.

However, the historic city of Saint Louis, is experiencing some of the worst impacts of raising sea levels; from eroding coast lines and submerging inhabited islands, to vanishing fishing activities. The impacts reminded me of the popular butterfly effect, an underlying principle of science that states, “the world of nature is so small and interdependent that a butterfly flapping its wings in the amazon rainforest can generate a violent storm on the other side of the earth.” Whether we accept it or deny it, unregulated human activities are vandalizing the earth and will deny future generations their rights to leave in a safe and healthy environment. This will definitely not make the current generation, good ancestors!

I departed Senegal more enlightened, not because I was able to confirm the common challenges facing people in the streets of Dakar and Kampala, but because I was able to authenticate the fact that country situations, such as overfishing, coastal erosion, discrimination and ethnic struggles among pastoralists and sedentary farmers are closely linked to displacements of people within and across international borders.

At the same time, I was quick to remember a conclusion from Papa Demba Fall’s study, that the desire to leave Senegal (for Europe) does not mean a total separation from home country because in Senegal, like it’s the case elsewhere on the continent, “migration is fundamentally seen (by families) as a time in life that offers opportunities to enhance the living conditions of those staying in the home country, and/or an opportunity to ensure a better future to the returning migrants.”

For the benefit of both Senegal and European countries, Papa Demba Fall recommends the promotion of circular migration – the temporary and usually repetitive movement of a migrant worker between home and host areas, typically for the purpose of employment. It represents an established pattern of population mobility.