Minority Rights Group > News > Africa > Uganda > Leaving no one behind: Sustainable Development Goals and persons with disabilities in Uganda

Leaving no one behind: Sustainable Development Goals and persons with disabilities in Uganda 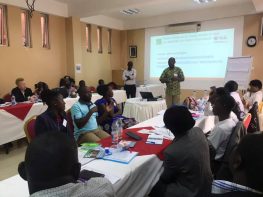 In adopting the Sustainable Development Goals, the UN General Assembly envisaged a just, equitable, tolerant, open and socially inclusive world in which the needs of the most vulnerable are met. Recognizing that the dignity of the human person is fundamental, UN member-states expressed the wish that the Goals and targets are met for all segments of society. They pledged that no one will be left behind; “we will endeavour to reach the furthest behind first,” they declared!

Perhaps  one of the populations still left at the furthest point behind – depending on how the discrimination they face intersects with other variables [such as ethnicity, age and identity] – is persons living with disabilities. Up to 15 percent of the world’s population (more than a billion people) lives with some form of disability, nearly 200 million of whom experience significant challenges in functionality. In Uganda, this figure stands at 14 percent of the country’s 43 million people.

From the 2014 national population and housing census, the proportion of persons with disabilities that have never been to school was more than twice (31%)  that of people without disabilities (13%). In terms of identities, ethnic minorities are still affected disproportionately, for example the census data shows that only 32.3 percent of Karimojong pastoralists’ children (with disabilities) were attending school; 12.9 percent dropped out of school while 54.8 percent never attended school at all. In comparison with other localities, 70.1 percent of children in metropolitan Elgon region were attending school; 23.1 percent had dropped out of school while only 5.7 percent never attended school.

As a show of political will, the government of Uganda ratified and subsequently domesticated the UN Convention on the Rights of Persons with Disabilities (CRPD) in 2008. And in compliance with its international treaty body reporting obligations, Uganda adopted the CRPD Committee of Experts’ Concluding Observations in 2016, effectively giving the disability movement a basis to advocate for the rights of persons with disabilities. Together with the Sustainable Development Goals, the CRPD provide a framework to demand that persons with disabilities are not left behind. While the Sustainable Development Goals only provide political aspirations for persons with disabilities to imagine a better world, the CRPD is legally binding, and provides a legal framework which can be utilized to draw the attention of decision makers for the creation of disability-inclusive policies.

During a recent convening of Uganda’s disability-led organizations, arranged with support from  the Swedish International Development and Cooperation Agency (SIDA)  and Minority Rights Group International, Uganda’s performance in relation to the CRPD came under scrutiny. According to Oscar Walukhu-Wakooli, the Programmes Coordinator of the East African Center for Disability Law and Policy, Ugandan laws still use derogatory language towards persons with disabilities which is discriminatory and unacceptable. An assessment of selected national laws relating to the CRPD (pages 21 to 22), conducted by the OHCHR, found that the continued use of derogatory terms to refer to persons with psychosocial disabilities is an outright violation of their right to inherent dignity.

In 2016, the CRPD Committee of Experts’ Concluding Observations (page 6) called for the repealing of article 23 (1) of the Constitution of the Republic of Uganda which has the effect of depriving persons with disabilities of their liberty on the basis of impairment through forced detention and involuntary institutionalization. The article states that ‘No person shall be deprived of personal liberty except in any of the following cases – (f) in the case of a person who is, or is reasonably suspected to be, of unsound mind… for the purpose of the care or treatment of that person or the protection of the community.’

In her closing remarks, Agnes Kabajuni, the Regional Manager of Minority Rights Group International’s office in Africa urged the government and stakeholders to broaden the focus and devise interventions that seek out persons with disabilities among ethnic and indigenous minorities.

‘MRG is aware of the multiple discriminations persons with disabilities from ethnic minorities and indigenous backgrounds go through in their communities. Even without a disability, these communities are disproportionately discriminated against; if their ancestral homes are not being gazetted for conservationist projects, they are being socially denigrated. With disabilities, they are pushed further to the edge and will have to endure multiple tragedies throughout life,’  Kabajuni warned.