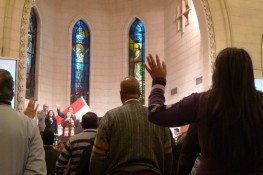 Following a call for protests against the government of Egyptian President Abdel Fattah al-Sisi in September 2019, a crackdown against youth, politicians, academics, activists, and journalists has been ongoing. Minority Rights Group International (MRG) strongly condemns the detention of those defending the rights of minorities by a government that presents itself to the world as protector of minorities.

‘A clear pattern is emerging in Egypt, namely the detention of minority activists who have done nothing other than advocate peacefully for their rights, on behalf of their communities and Egyptians generally,’ notes Carl Soderbergh, MRG’s Director of Policy and Communications. ‘We are particularly worried that minority detainees are being held for months without trial.’

Patrick Zaki, researcher for the Egyptian Initiative for Personal Rights (EIPR) and postgraduate student at the University of Bologna, was arrested upon arrival at Cairo airport from Italy on 7 February on trumped up charges. He was tortured before facing prosecution the following day. Ramy Kamel, Coptic activist and head of the Maspero Foundation for Development and Human Rights, was arrested at his home on 23 November. Kamel was also reportedly tortured by Homeland Security officers on 4 November. Labour activist, member of the Egyptian Democratic Party, and member of the Transport Syndicate, Khalil Rizk appeared a few days after his disappearance on November 17 before the state security prosecution on terror charges. Jober Balnik, a former member of the Dostor party, an active member of the community, was arrested in his home in Mallawi at 2am on 16 December, with security forces confiscating his phone and computer.

‘A real concern is that the detention of vocal defenders of minority rights is sending a green signal to the wider Egyptian society that minorities can be targeted with impunity,’ Soderbergh adds.

Forced disappearances of Coptic Christian women are on the rise, with at least 13 cases reported since October. At least two Copts have been attacked with knives in the street in the past two months in what appear to be religious-based attacks. In the village of Fao, Qena, a house belonging to Copts was attacked after being repurposed as a church for New Year celebrations and prayer, part of an ongoing struggle by the Fao Copts to find a place to pray. While the state is making progress in granting licensing of previously unregistered churches, attacks against the Coptic community pass with little justice to the Coptic victims. According to reports from the community, attacks against Copts have increased in the past few months. Community members fear that the arrests of activists seem to have reinvigorated extremist groups.

The Nubian community, facing a crisis regarding their land rights, has also seen three of its members arrested. They were arrested after protesting the efforts of a businessman to control the historically Nubian islands of Amun and Qlada. Nubian families state that they have ownership of the land with documents dating from 1904. They continue to cultivate the land on Qlada island. In November 2019, Nubians on Qlada island were threatened and intimidated by a group of private security guards, identified as working for the businessman, in an attempt to force them to leave. Subsequently, Khaled Arafat, one of Qlada island landowners, was arrested and forcedly disappeared. Jabal Touqouk village in Nubia was stormed at dawn by security forces on 23 December, with a number of the villagers arrested and others assaulted. Police used tear gas canisters against the people.

Meanwhile, Sinai Bedouin community members continue to suffer in the prolonged military operations in the Sinai. Hundreds of extra-legal executions, detentions, and forced disappearances have been reported, including those of children. Additionally, evidence suggests that North Sinai Bedouins are being denied access to adequate medical services in detention. Mariam Salem died in prison on December 13, 2019, from liver fibrosis which had deteriorated during her imprisonment. Salem had been given a ten-year sentence, together with other members of her family, for protesting the demolition of her home in North Sinai by state forces.

‘The Egyptian government must respect its human rights obligations, including freedom of speech and assembly, security of person, protection against arbitrary detention, and the right to a free and fair trial,’ Soderbergh concludes. ‘And it must not discriminate against minorities on the basis of their religious or ethnic background or status.’