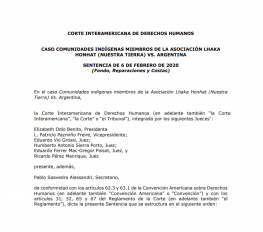 Last week, the Inter-American Court of Human Rights (the Court) announced it had issued a landmark judgment in a case brought by the Lhaka Honhat Association on behalf of its members from the Wichí (Mataco), Iyjwaja (Chorote), Komlek (Toba), Niwackle (Chulupí) and Tapy’y (Tapiete) indigenous communities from the Rivadavia Department of the province of Salta, Argentina. The judgment expands and clarifies the content of State obligations to protect indigenous peoples’ economic, social and cultural rights under Article 26 of the American Convention on Human Rights (the Convention) and underscores that States must take measures to effectively protect indigenous lands from encroachments by non-indigenous settlers. MRG together with a coalition of other NGOs under the umbrella of ESCR-net submitted an amicus brief in the case encouraging the Court to build on its emerging jurisprudence and apply the autonomous rights to a healthy environment, cultural identity, food, and water under Article 26 of the Convention.

The Lhaka Honhat Association originally brought a case before the Inter-American Commission on Human Rights (the Commission) in 1998 with the support of the Centro de Estudios Legales y Sociales (CELS) to protect their ancestral lands. Since the nineteenth century, a growing number of non-indigenous settlers have moved onto their lands and engaged in cattle herding, logging and other activities that contaminated water sources and caused deforestation. Settlers installed wire fencing, preventing indigenous peoples from freely moving within their territories. The combined effect of these activities has interfered with indigenous lifestyles, impacting their ability to access traditional food and water sources and to practice their religious and cultural rites. Despite adopting legislation aimed at titling the communities’ lands, Argentina has consistently failed to adequately protect their lands from encroachment. Following unsuccessful attempts to mediate the dispute and enforce the recommendations issued by the Commission in its 2012 decision, the case was referred to the Court.

The Court’s judgment breaks new ground on a number of issues. It held that by failing to adequately protect and title indigenous lands, Argentina violated their right to a healthy environment, water, food and cultural identity. Significantly, the Court’s holding establishes that these rights are protected under and can be applied through Article 26 of the Convention, which enshrines the right to economic, social and cultural development.

The judgment also sets an important precedent in terms of the restitution of indigenous lands. The Court determined that Argentina must ensure non-indigenous settlers are removed and resettled on alternate lands within six years of the judgment. Accordingly, the Court upheld the centrality of indigenous lands to their cultural integrity and survival, charting a way forward in cases where large non-indigenous settler populations have gradually encroached on indigenous territories, infringing on their economic, social and cultural rights in the process.

Ultimately, this judgment is significant because it expands and builds on the scope of economic, social and cultural rights protection under the Convention, as well as the Court’s Advisory Opinion on the Right to a Healthy Environment. While it sets an important precedent in the indigenous rights context it also opens the door for a more expansive reading of the scope of protection under Article 26 for future plaintiffs.

Amicus brief submitted by ESCR-net in coalition with MRG and others in the case.

Press release of the Inter-American Court of Human Rights regarding the judgment.

Additional documents and information about the case are available on CELS’ website.