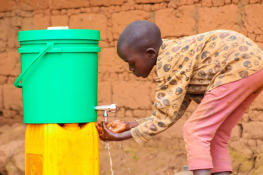 Empirical evidence shows that ethnic minority populations experience worse outcomes than majority groups during and after disasters.  They often have poorer infrastructure and fewer services due to entrenched structural discrimination. This can become critical in an emergency. According to KNBS data, an estimated 11.5 million people in Kenya face food poverty out of which 8.2 million are in rural areas. Those who are food poor are vulnerable to malnutrition and starvation: with normal business trading affected they have lower stocks of food to rely on. Thus, hunger becomes as much of a threat in the coming period as the disease we are aiming to mitigate.

We can learn lessons from past epidemics such as Spanish Influenza, malaria and the AIDs pandemic among others. These highlight the possible impact of COVID-19 and provides clues to what can be done to help marginalized communities.

Spanish Influenza affected 500 million people globally, with 50-100 million estimated to have died. This was 5-10 times higher than those who died as a result of World War I. The Spanish Influenza reached Kenya in 1918 and took just nine (9) weeks to spread to all districts in Kenya.  Starting in 1921 colonial government established heath facilities in some rural areas, ninety nine years later, specialized doctors, nurses, well-equipped hospitals and availability of essential medicine are still hard to find outside the major urban areas.

Aweer Community members live in five villages of Basuba, Mangai, Milimani, Mararani and Kiangwe of Boni Forest in Lamu County. Residents of Mararani have to travel approximately 190 kilometres to King Fahd Referral Hospital in Lamu to access specialized health services. The Mararani-Lamu road has been rendered unsafe due to land mines planted by Al Shabaab terrorists. The locals thus depend on motorcycle taxis which are marginally safer and less likely to trigger the explosion of landmines.  After overcoming all these challenges they will arrive at King Fahd which has currently ZERO ICU beds just like 25 other counties across Kenya.

Security forces such as General Service Unit (GSU) officers based at Manda Airbase use helicopters to transport personnel and other supplies to their security camps. They occasionally provide airlifts for critically ill patients. However, Aweer residents have to wait until the helicopters are available.

The state should safely detonate any existing land mines and construct and equip healthcare facilities in Mararani and other villages. Failure to provide healthcare services for all in the fight against COVID-19 risks significant harm to the community and a prolongation of the epidemic in Kenya. The urgent immediate need is to put in place mitigating measures such as provision of soap, facemasks and a supply of clean portable water in all villages to safeguard minority communities from COVID-19.

On access to information, minority and indigenous communities lack access to technology, news and internet where they can receive information. Language and literacy is also a barrier. As we fight COVID-19, the state should provide means of accessing information and translate it into local languages.

Kenya passed a Presidential decree (27 March) requiring people to stay indoors from 7pm – 5:00 am until further notice. This curfew may be bearable, but a complete lockdown would harm members of minority and indigenous communities because they are more likely to break the complete lockdown due to starvation. Pastoralists need to graze and water livestock or risk losing it. Pastoralism contributes approximately USD$ 1.13 billion to the economy, this may devastate the impact further, especially since majority of the indigenous and minority groups depend on pastoralism as the only source of their livelihood.

Reported police brutality in implementing the curfew, echoing events during the 1952 emergency is also a fear since these phenomena often builds on existing  discriminatory attitudes in society towards minority groups and indigenous communities, and it remains imperative for the Independent Police Oversight Authority (IPOA) to investigate reported cases of police brutality and recommend prosecution.

People in remote rural areas are more likely to be hit hard by the COVID-19 due to lack of access to electricity, poor internet connectivity, scarcity of portable water for handwashing and limited access to medical services. With minority and indigenous communities in Kenya living in rural areas there is a real risk of them becoming the frontline of infection. Poor road infrastructure would make transporting COVID-19 patients to healthcare facilities challenging, potentially accelerating the spread of infection and mortality.

Some minority groups such as the Sengwer community fear that they may be easily evicted from their lands in Embobut Forest especially during a possible lockdown. The state has an obligation to protect, respect and fulfil economic social and cultural rights for the minority and indigenous communities even during curfews and lock-downs brought about by pandemics.

Statelessness and a lack of documentation may also harm the prospect of asylum seekers, undocumented migrants and homeless people being protected in these challenging times. Minority and indigenous communities may find themselves included in this group since their remote locations often mean poor birth registrations and access to documents. The Nubian Community (most of whom lack identification documents) are likely to suffer in this respect.

If anything the evolving situation in Kenya highlights the importance of the statement of UN High Commissioner Michele Bachelet, who said that: “[T]o effectively combat the outbreak means ensuring everyone has access to treatment, and [that they are ]… not denied healthcare because they cannot pay for it or because of stigma.”

Photo: A young boy from the Awer community in Lamu County, Kenya washing hands with soap and clean water as part of the campaign against the spread of COVID-19.