Minority Rights Group > News > News and blogs > While we all spoke about COVID-19, Algeria passed two worrisome laws in the blink of an eye

While we all spoke about COVID-19, Algeria passed two worrisome laws in the blink of an eye 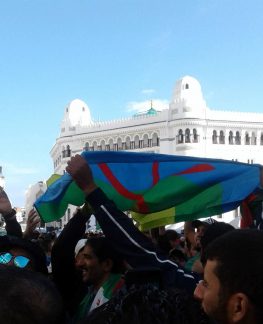 By Nourredine Bessadi, Freelance Consultant and Journalist. Photo: People holding the Amazigh flag during the Hirak demonstrations in Algiers, July 5, 2019.

On 21 April 2020, the Algerian Ministry of Justice presented a draft Law on Preventing and Combating Discrimination and Hate Speech before the specialised commission of the Assemblée Populaire Nationale (APN), and two days later it was adopted by the Council of Ministers. Meanwhile, another law amending and completing the Penal Code that was put before parliament almost simultaneously.

The speed at which these laws were passed is one we do not see often. It started with the instructions given by the President of the Republic for the preparation of two bills in the Council of Ministers, then the adoption of the two bills by the same Council before ending with their vote at the APN. Observers were stunned by this accelerated process and questioned the reasons behind it, especially since many consider the bills non urgent in nature to justify the use of such a procedure. It has raised concerns among national and international human rights organisations.

Irrespective of the swift passing of the laws, the content is also of deep concern, particularly for Amazigh activists. The Law on the Fight Against Discrimination and Hate Speech calls for the creation of a national Observatory for the prevention of discrimination and hate speech, placed under the authority of the President of the Republic. Many consider it very vague, leaving the judge a margin of interpretation which allows them to repress under pressure in a judicial system that is considered far from being independent. Although there is no direct mention of Amazighs in the laws, they are the main target of hate speech in the media and on social networks in Algeria. There is also no mention of discrimination based on religion nor of the word “minority”.

It should also be noted that Algerian laws already cover this issue. Article 298-bis of the penal code punishes any perpetrator for an “insult to one or more persons belonging to a group or ethnic group” with up to six months in prison. Meanwhile, Article 295-bis of the same law punishes “anyone who publicly incites hatred or discrimination against a person or a group of people because of their racial or ethnic affiliation or organizes, propagates, encourages or carry out propaganda actions for the same purpose” with up to 3 years prison. The International Covenant on Civil and Political Rights, ratified by Algeria in December 1989, also stipulates in Article 20 that “any advocacy of national, racial or religious hatred that constitutes incitement to discrimination, hostility or violence shall be prohibited by law.”

Regarding the Law Amending and Supplementing the Penal Code, many consider it very restrictive, particularly in regard to freedom of the press and of NGO work. The law criminalises the broadcast of “fake news” deemed harmful to “public order and state security”. The National Union of Magistrates affirms that this text is a “manifest violation of the principle of criminal legality, which stipulates that punishable behaviour must be clearly and beforehand defined by law, to preserve the fundamental rights and freedoms of individuals”.

The Congrès Mondial Amazigh (World Amazigh Congress), an umbrella organisation including Amazigh organisations from around the world and especially North Africa, has sent a communication to UN Special Procedures, the Human Rights Committee, the African Commission and the African Union Special Procedures expressing their concerns. In particular, they expressed concern over Article 2 of the amended code which foresees prison for up to 7 years and a fine for receiving funds from abroad with the objective of “carrying actions that could harm the security of the State, the stability of its institution, national unity and territorial integrity”. According to the CMA, this article “is very dangerous for the Amazighs because it can be used to prevent them from receiving contributions from their brothers living abroad (to support initiatives such as those to face the COVID19 emergency), thus striking a blow against the lifestyle and spirit of solidarity that is part of their culture.”

Comments are closed.
Filed Under: Covid-19