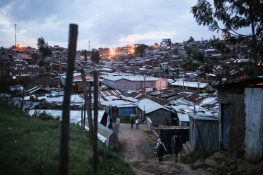 In recent years, photographer Zsuzsánna Fodor, a Hungarian in Romania, has been working on refugee routes and in conflict zones. Last December she participated in a field study in Kenya. Nairobi’s southwestern suburb is called Kibera, which is Africa’s largest urban slum, is crowded with hundreds of thousands of people living within a space of a few square kilometres. This is a photo report from a neighbourhood where there is no running water, sewage system, or electricity and people live on one dollar a day.

As I was wandering around the streets of Kibera with my local leader, at one point a young man hurried after us. As soon as he got his breath, he explained how glad he was to find us, because he had heard that a journalist from BBC is working on the streets of Kibera. He wanted to give us his contact details, as he was studying journalism in Nairobi and would have loved to work with the foreign press.

I blushed and stammered, trying to explain myself: “That’s very flattering, but unfortunately I have nothing to do with BBC, I’m not in the same league.” I briefly outlined that I am a photographer living in Romania, that I graduated from cinematography, photography and media 10 years ago and that I only recently turned to press photography. I revealed that my travel to Kenya is actually a field trip. He got the picture very quickly. “Then you are also just starting to build your portfolio and your network.” – he said with an understanding smile. “Ahem.” We were both standing there with a little professional disappointment in our hearts. Our situations were at the same time very similar and very different.

I applied for Minority Rights Group’s course in the second half of 2018. The aim of the program was the professional training of Central and Eastern European journalists and media professionals, focusing primarily on topics around migration and minorities. In recent years I have been working on projects exploring different perspectives on human rights issues, refugee routes and conflict zones. It was therefore clear to me how truly beneficial the MRG webinar, including field trips and theoretical knowledge, would be for me.

One of these study trips brought me to Kenya in 2018 along with 9 other participants on the course. This is how I ended up in Kibera. Now, I would like to share with you my work there. 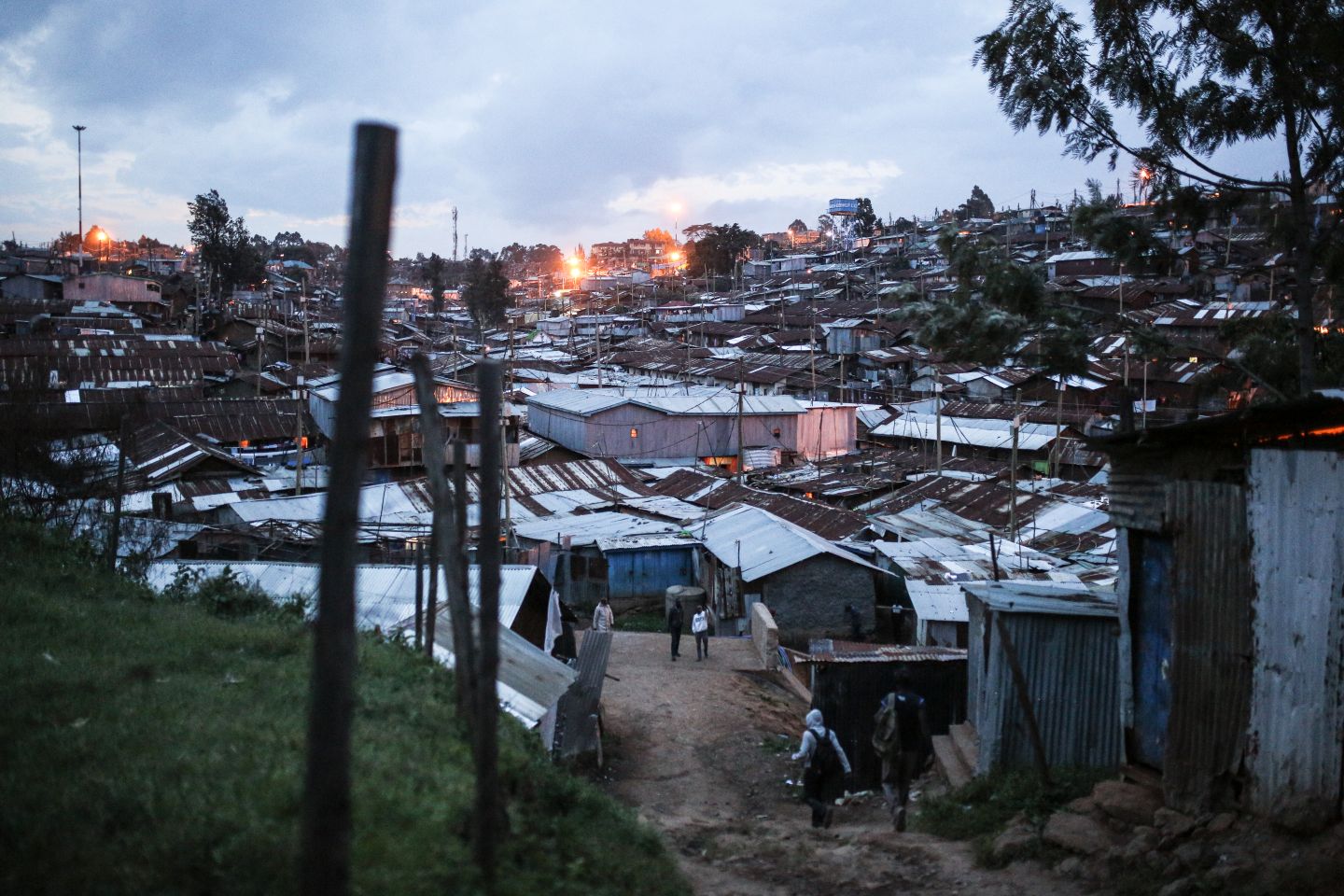 Kibera, Nairobi. Wherever you look the name up, the word Kibera always stands for one of Africa’s largest slums. According to the 2009 Kenyan population census there were exactly 170,070 inhabitants in the slum, while other projects refer to around 200,000 or even to 230,000 – 270,000 people. Other sources, on the other hand, boldly argue claim the slum has a population of up to 1 million. 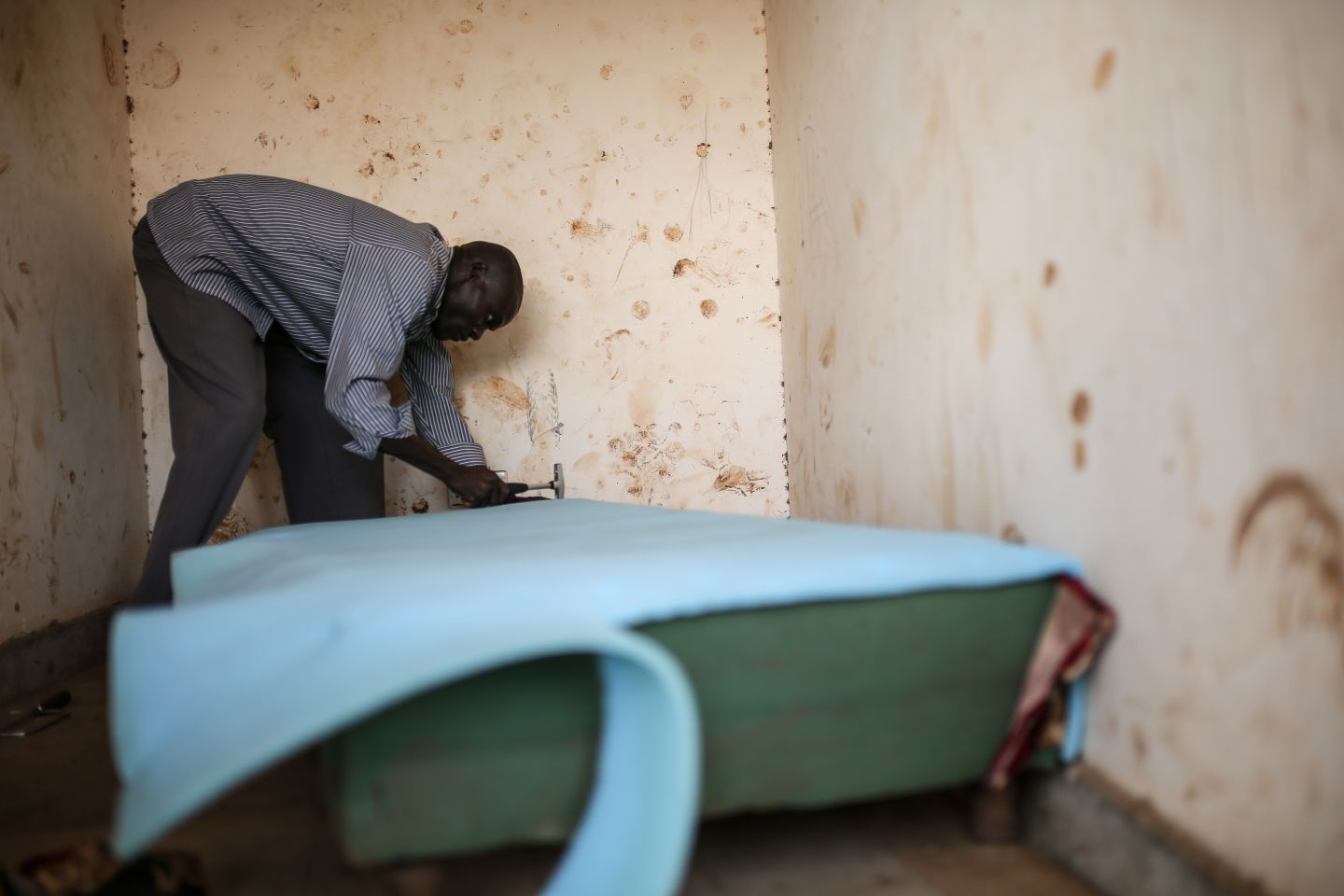 To call Kibera a slum is almost reductive. It is a complex, buzzing organism with unique human stories and viable initiatives. There are, of course, numerous and recognisable problems: colonisation, overpopulation, real estate investments, corruption, unilateral infrastructural developments. 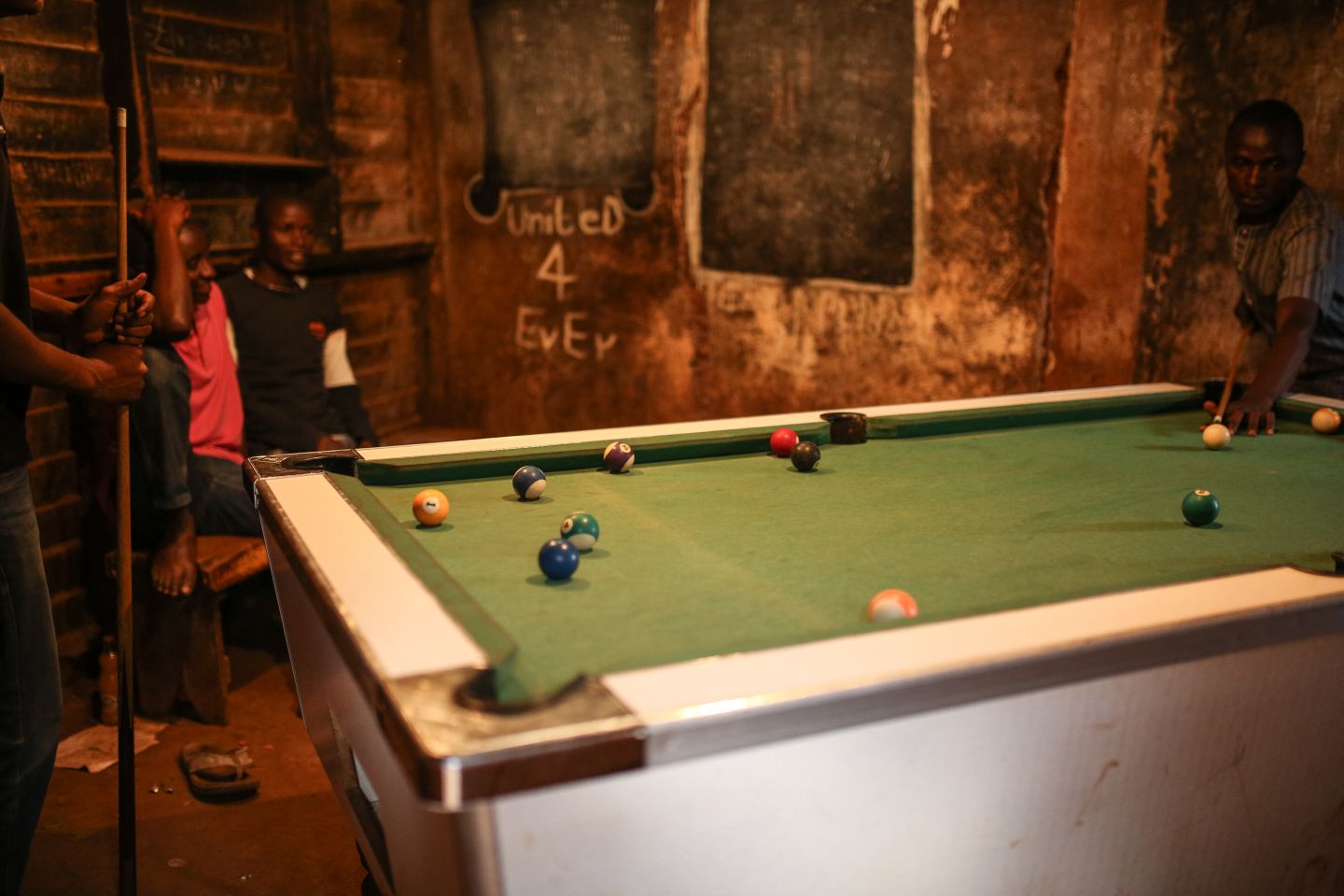 Hundreds of small businesses offer a wide range of services for the community throughout the whole district. 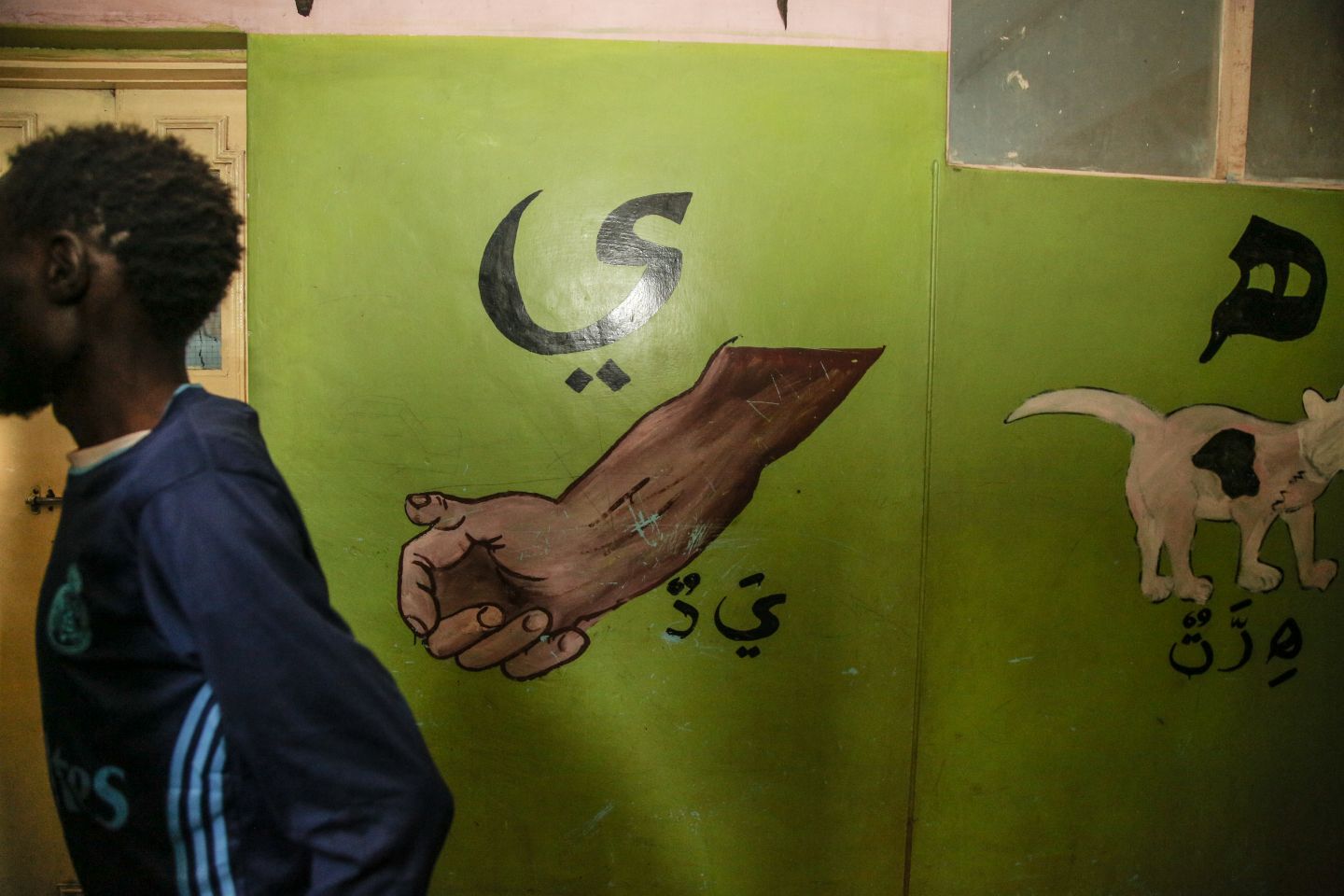 Mosque interior. More than 80 percent of Kenya’s population is Christian, while 10 percent are Muslim. The number of followers of the Catholic and Orthodox churches is significant, but the majority of the Christian population is Protestant. Within this are the Anglican, Presbyterian, Calvinist, Methodist, Baptist Church, the Pentecostal-Charismatic movement, and other non-Catholic and non-Protestant movements such as the New Apostolic Church, the Seventh-day Adventist Church, or Jehovah’s Witnesses. This religious diversity is reflected by churches, sanctuaries and mosques popping up on the main streets and alleys. 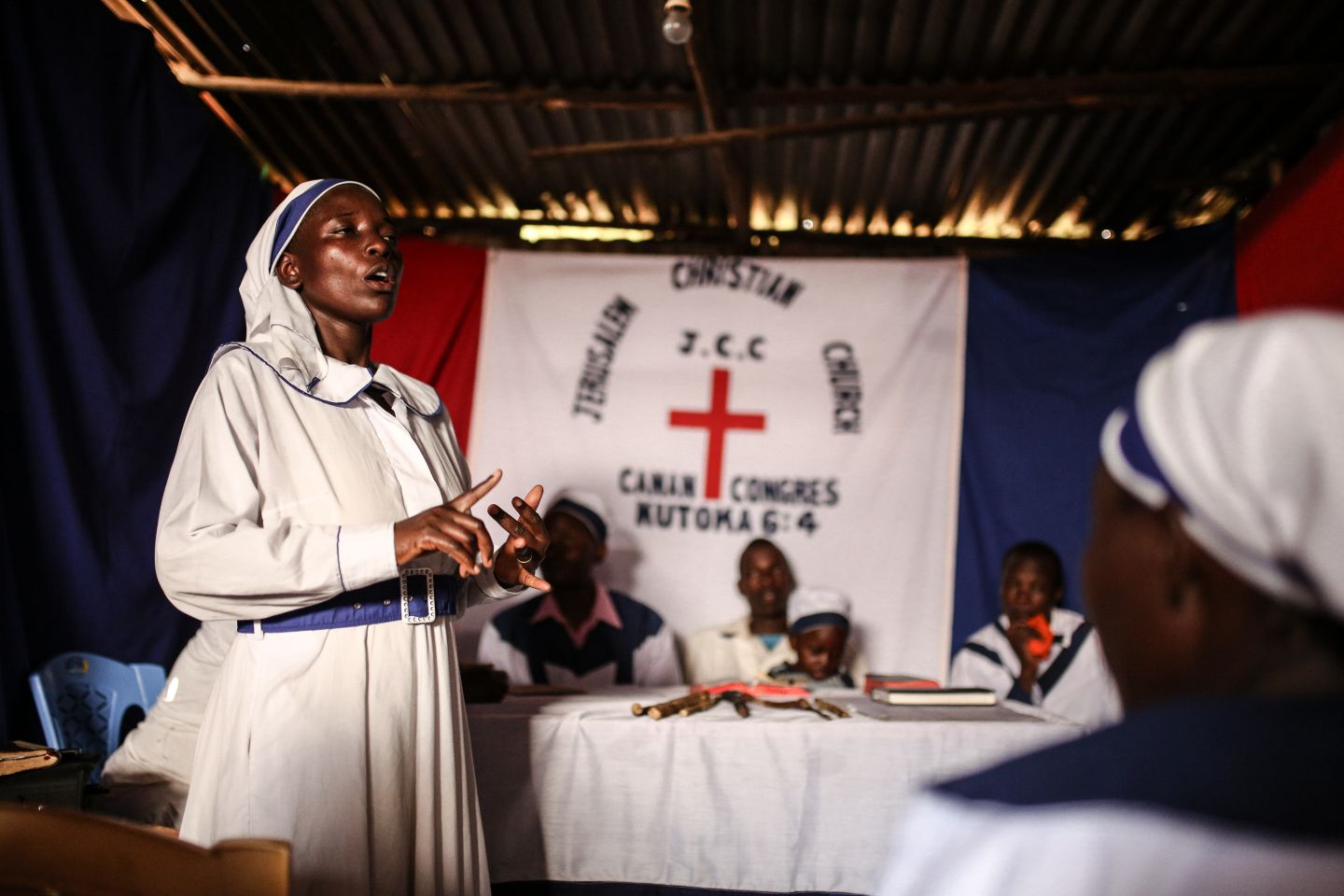 Sunday service at the Jerusalem Church of Christ (J.C.C.). 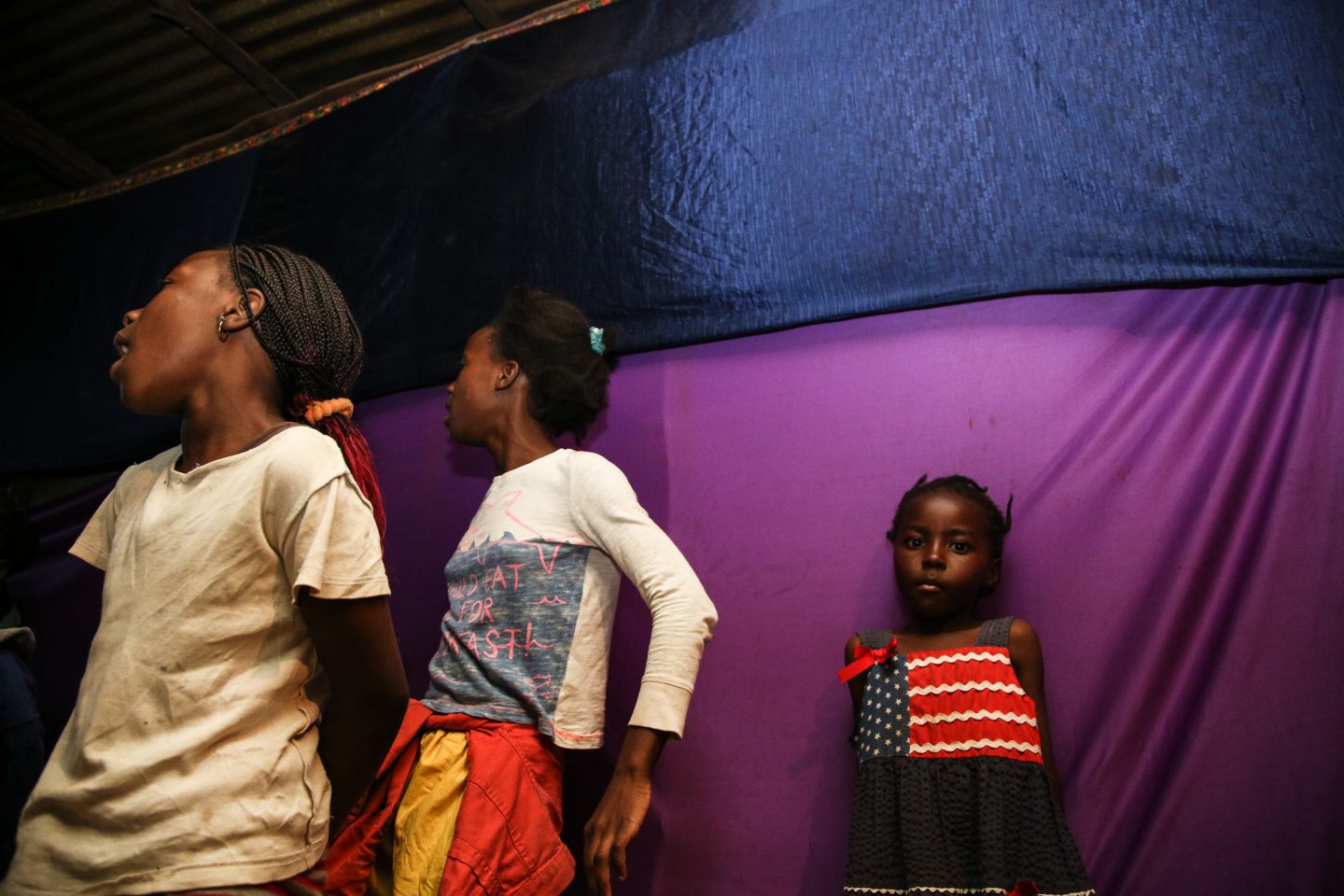 At one of the house of prayers, a group of children is rehearsing for their Christmas performance. 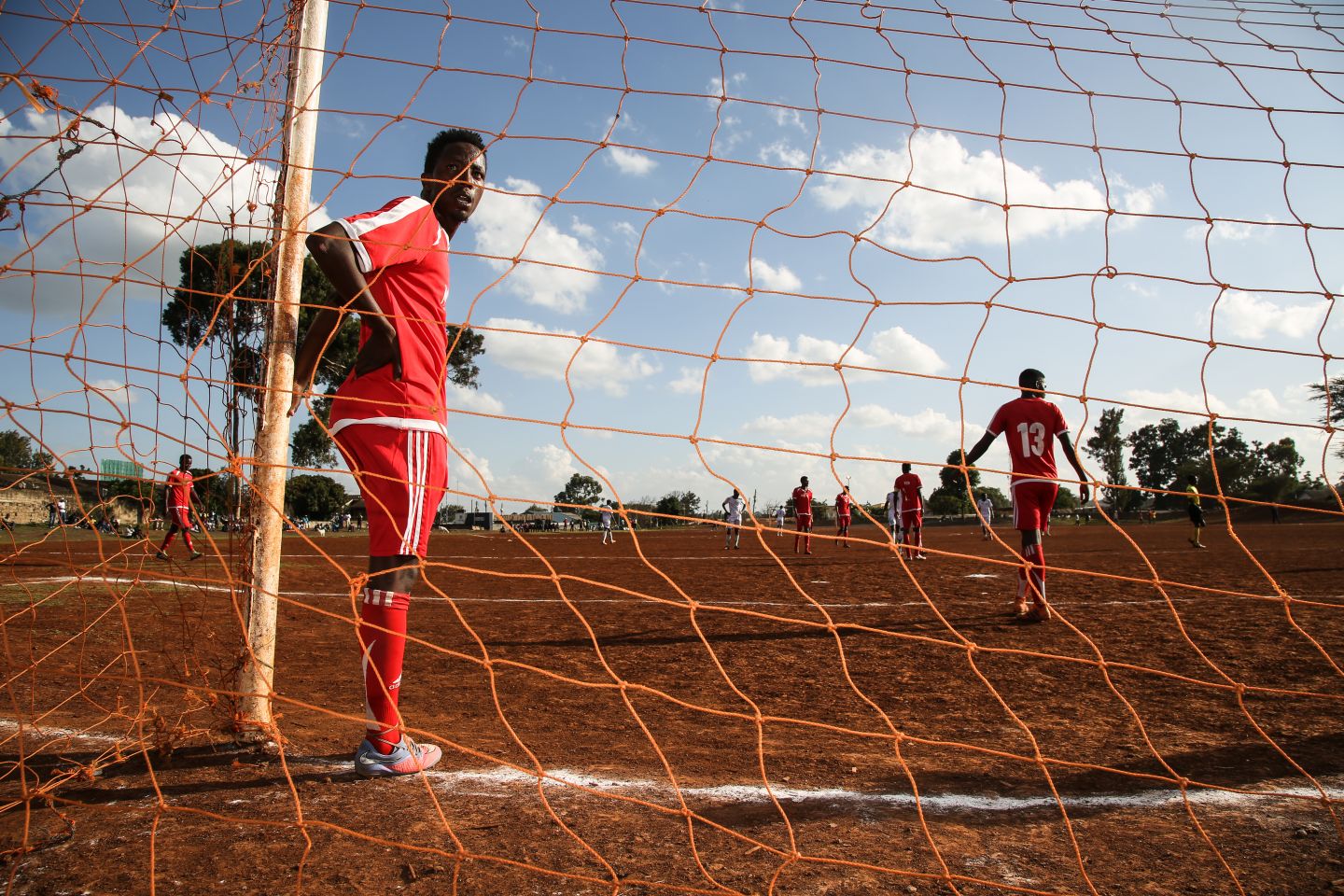 A Kiko Cup game in Kibera. Football here – as in so many economically and socially disadvantaged communities – plays an important role. It is not only a recreational activity, but also an opportunity to break out from the slum. The Kiberian Youth Reform Self Help Group has seen several of its protégés outgrow the organisation’s wings, among others the increasingly successful Gogo Boys football team.

This locally initiated organization employs young people who have a criminal history, but wish to change their way of life. The group supports sporting activities and involves these young people in its business projects that, not incidentally, are serving the local community. One such initiative is the operation of a sanitation centre that provides clean water, hygienic toilets and showers for residents at an affordable price. Creating job opportunities is an important step in curbing the relatively high crime rates in Kibera. This kind of community thinking and cohesion is essential in the rehabilitation of these young people, as they are living in a world where the dark side of ‘community cohesion’ also manifests itself. It takes control of justice and human life becomes insignificant (‘mob justice’ or ‘jungle justice’). 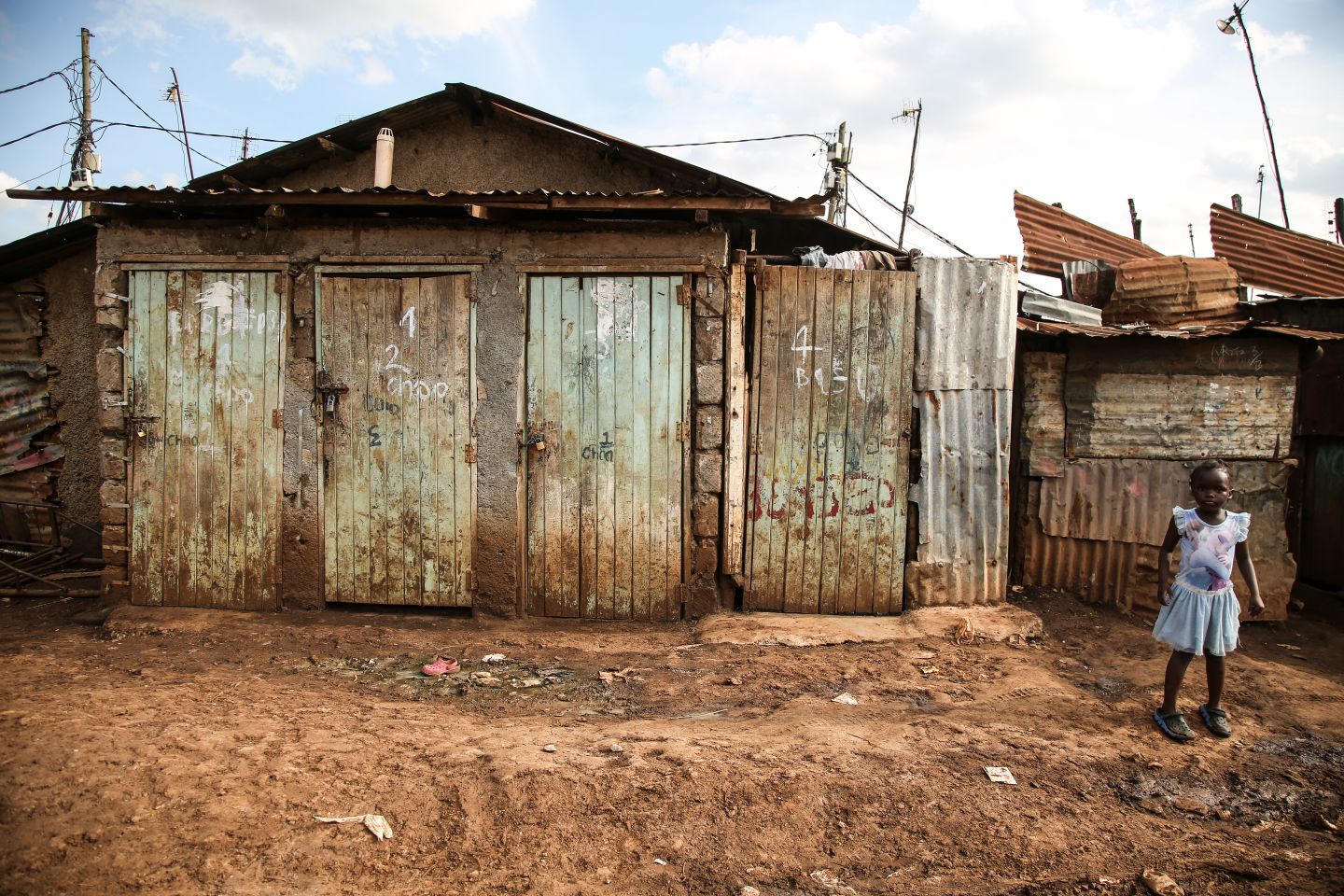 With the lack of a sewage system, these latrines are shared by several households. The alternative is paid public toilets. This system does not allow for the improvement of basic hygienic standards. Unfortunately, the use of these facilities is a source of danger for women and children, who often become victims of sexual harassment and rape at these locations. 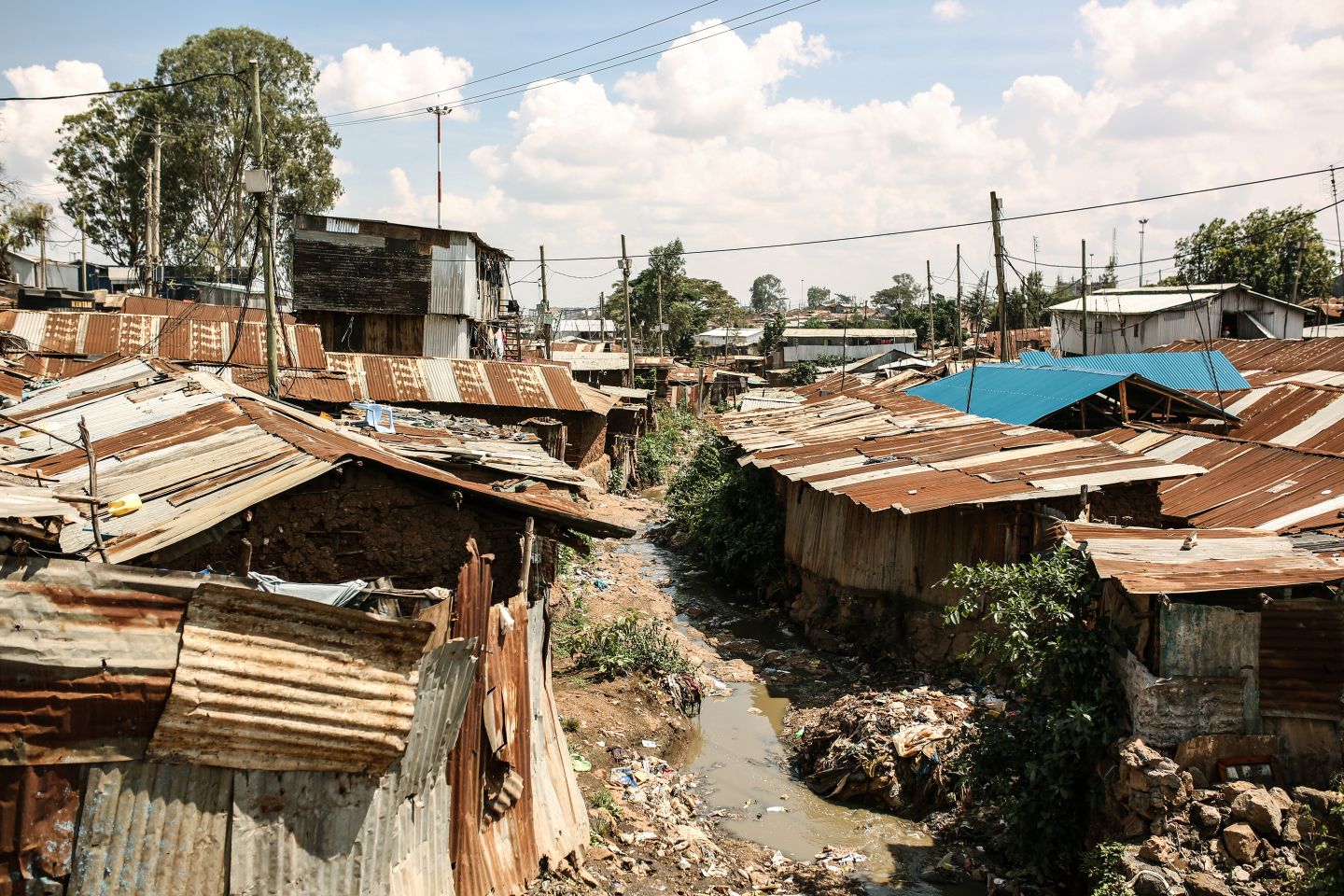 In Kibera there are a large number of active international and local NGOs, working closely with the community to provide both temporary and long-term improvements. These involve disadvantages faced by women; child prostitution; unemployment; high rates of AIDS and other sexually transmitted diseases; access to education; domestic violence; poor hygienic conditions; sex education. These are just a few of the areas concerned. 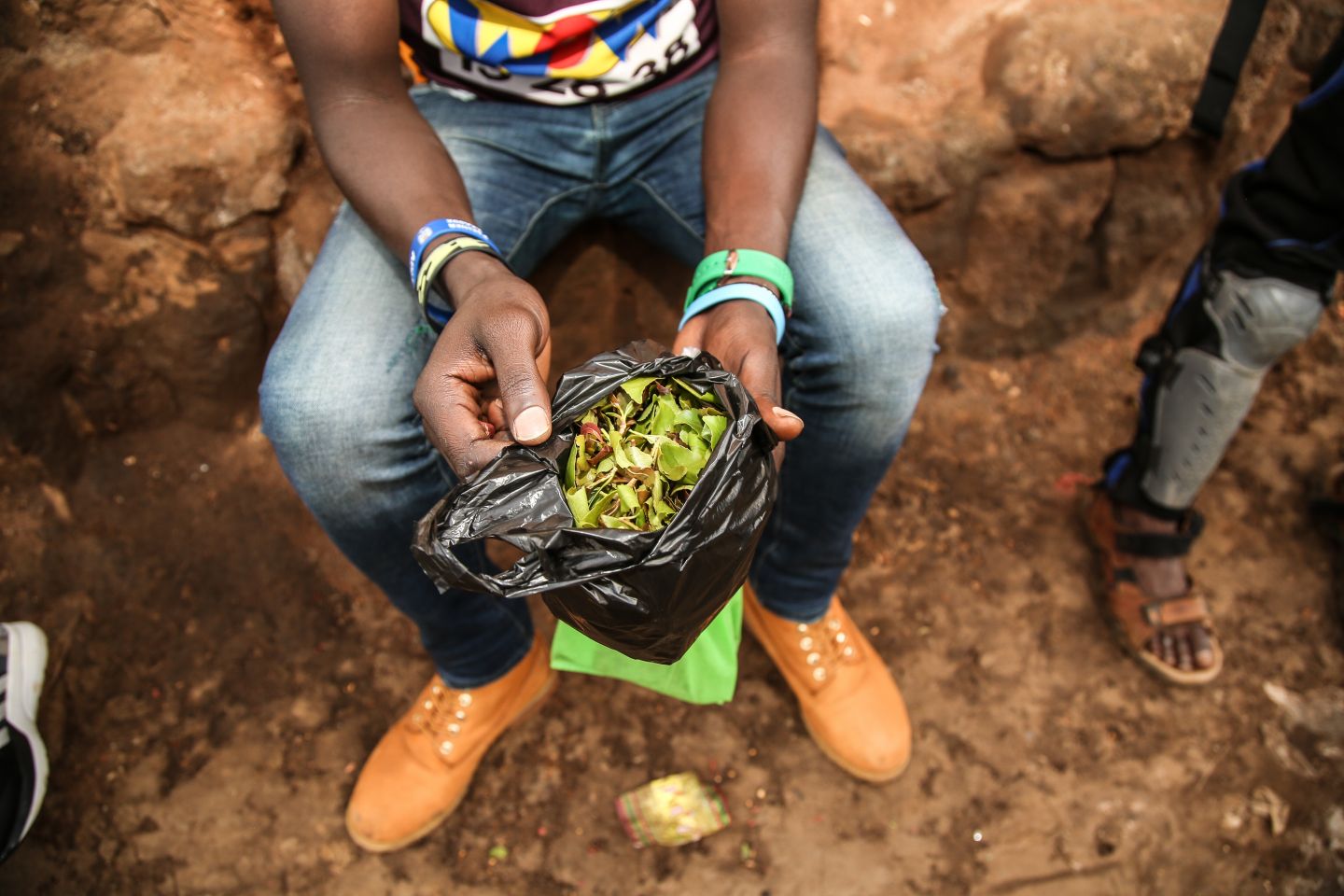 Kat is a legal and popular stimulant in Kenya. In 1980, the World Health Organization classified it as a drug. It is chewed for a long time by its consumers, often accompanied by hazelnuts or nuts or chewing gum, due to its bitter aftertaste. Although its consumption, cultivation and trade are illegal in several countries, its industry plays a significant economic role in Kenya. 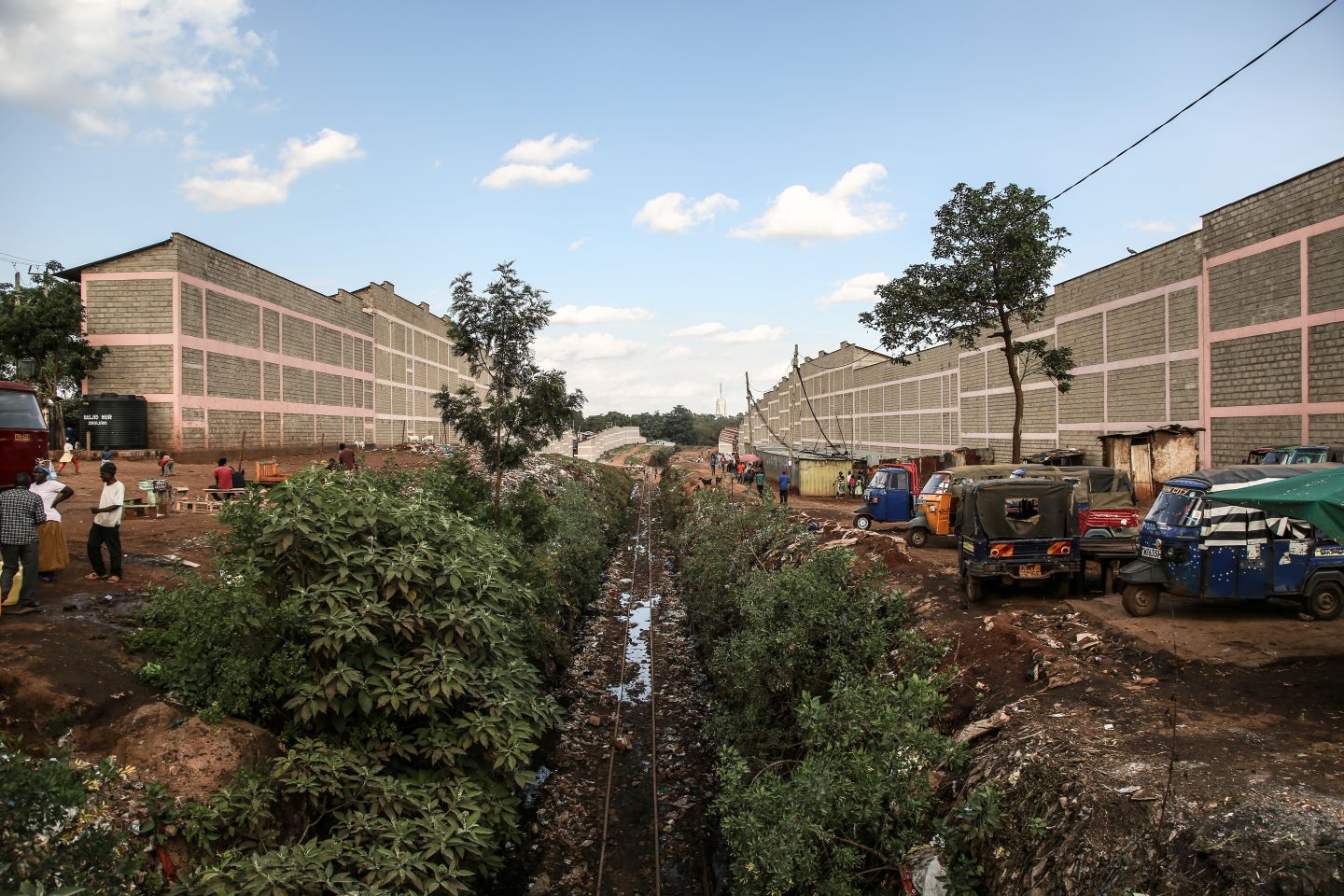 Between the narrow alleys of the slum and the improvised huts stacked on top of each other, new residential buildings and similar constructions occasionally appear. Several large-scale programs (such as the Kibera Slum Upgrading Initiative or the Kenya Railway Relocation Plan) address the housing situation, with key players being the Kenyan government, the World Bank and UN-Habitat.

However, most development programs do not take into account local socio-economic contexts and are thus unable to offer a long-term solution to people. The new residents are often unable to cover the cost of housing, so they rent out their accommodation and move back to their huts with a little extra income. Some of the transitional accommodation is located in other neighbourhoods of Nairobi, tearing people out of their community, whose support is often essential. Thus, in many cases, the real beneficiary of the projects is the city’s middle class, which receives acceptable housing at affordable rates, amid the rising real estate prices. 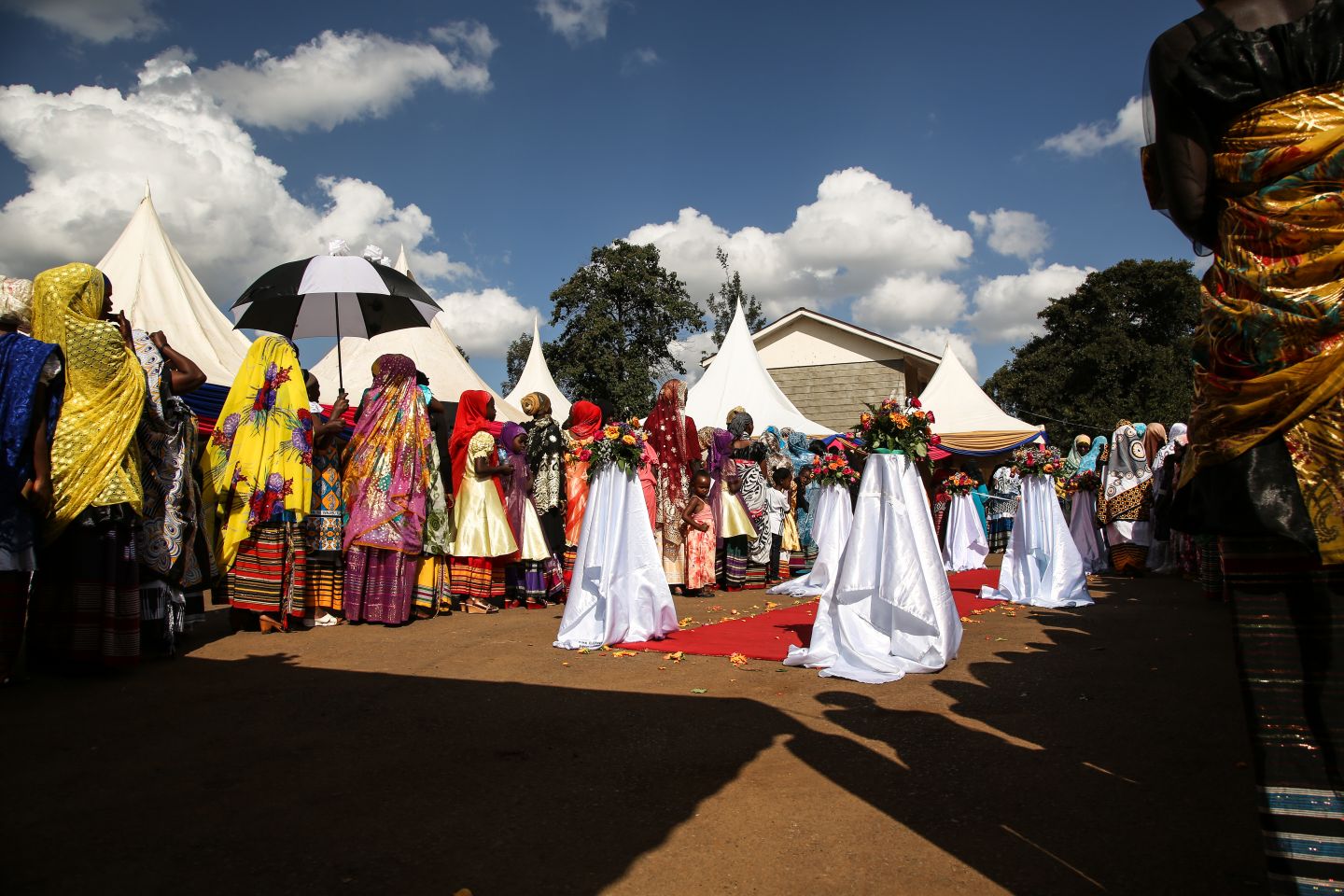 Nubian wedding. The first inhabitants of Kibera were Nubian soldiers, originally from Sudan, who in return for their service in the British colonial army, received a piece of land here along with the right of establishment in the first decades of the 20th century. After independence in 1963, due to the Nubians’ lack of official documents and titles of ownership, the Kenyan government declined to recognize their nationality and their right for the land. The Nubian community thus became a  stateless social groups of the country. This has intensified their difficulties regarding access to employment, land acquisition, education and health care. 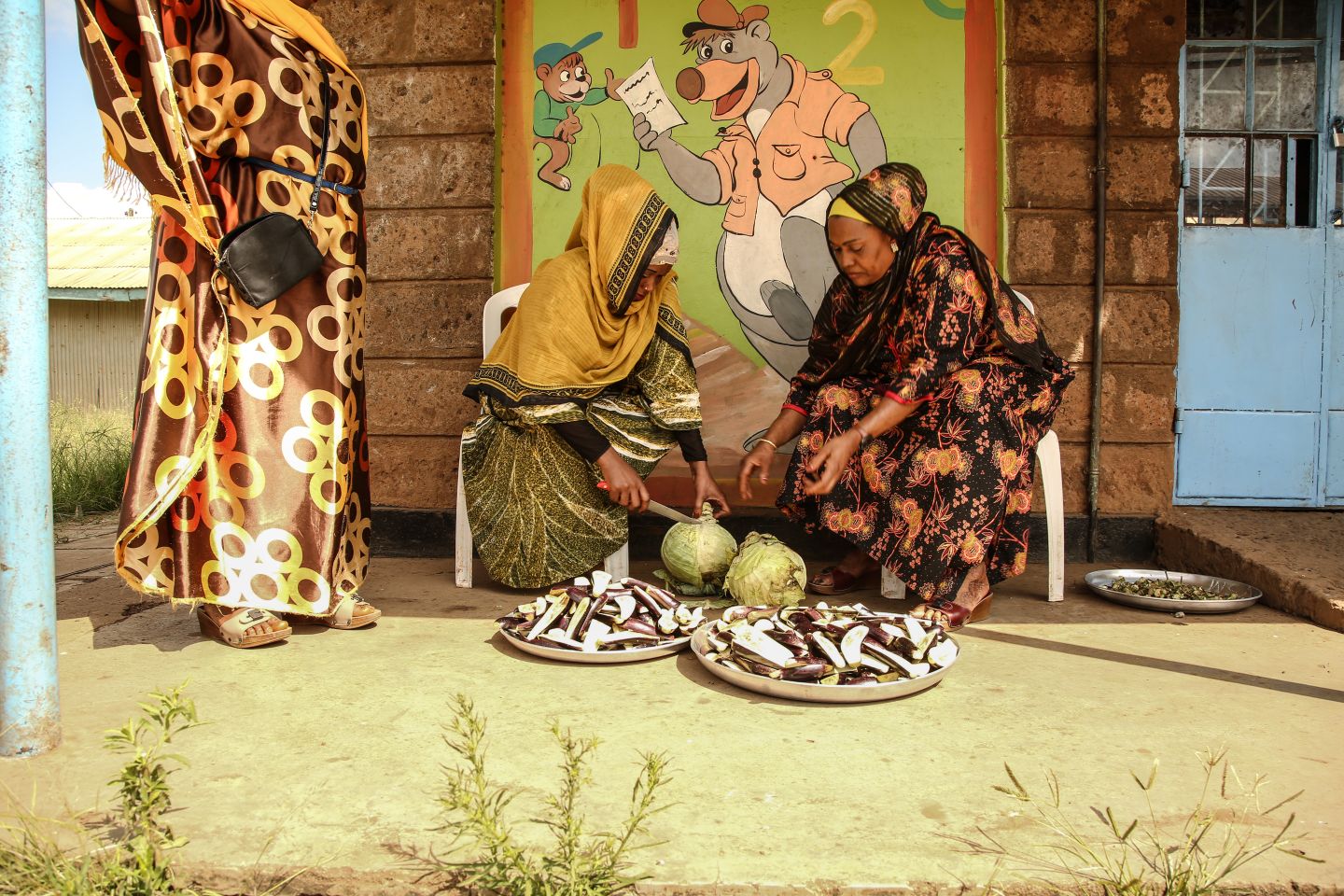 2017 was a breakthrough year in the Nubian community’s history with regard to land rights. After lengthy legal negotiations the Kenyan government has issued a title of ownership of 116 acres to the community of thousands. 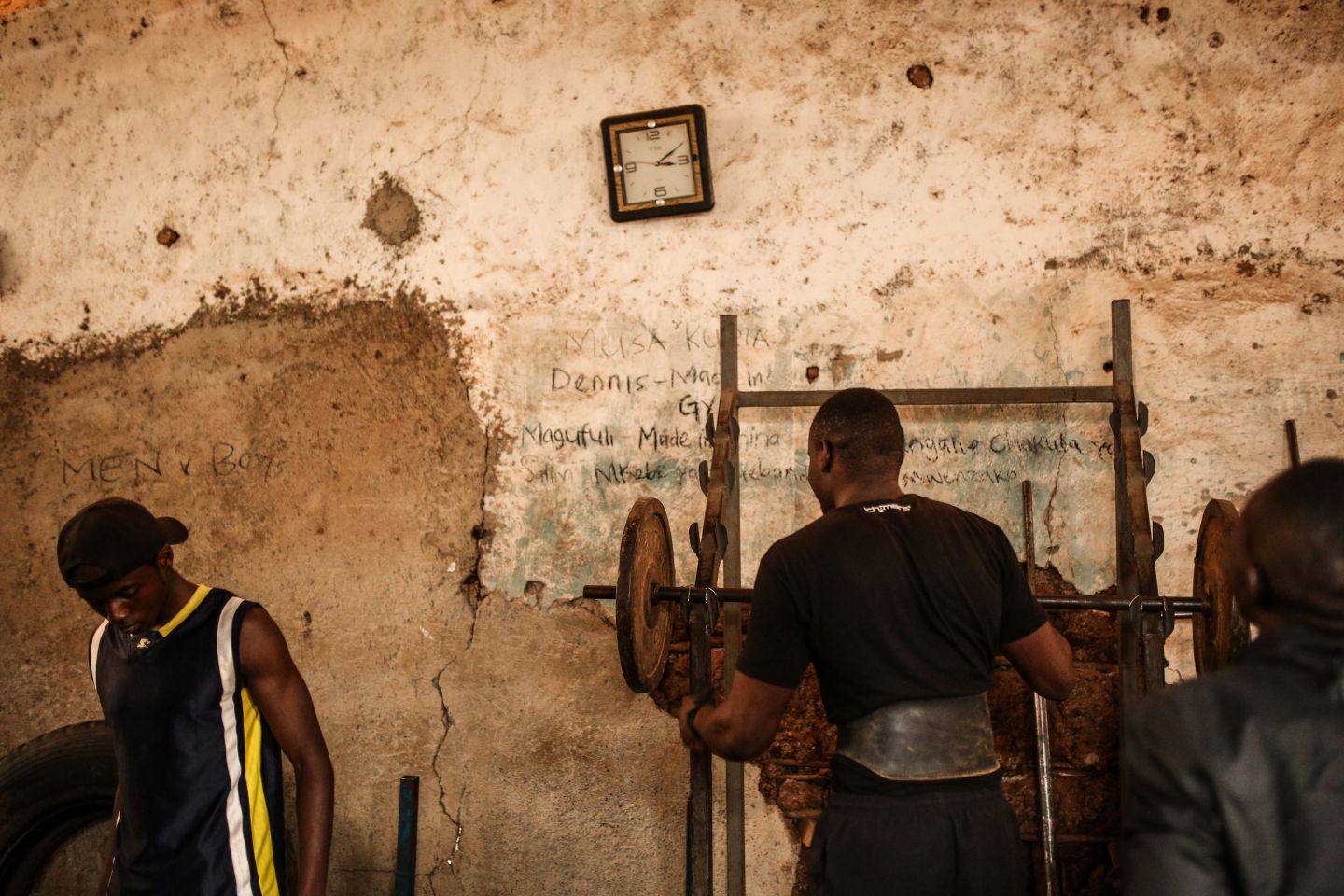 One of the few gyms. 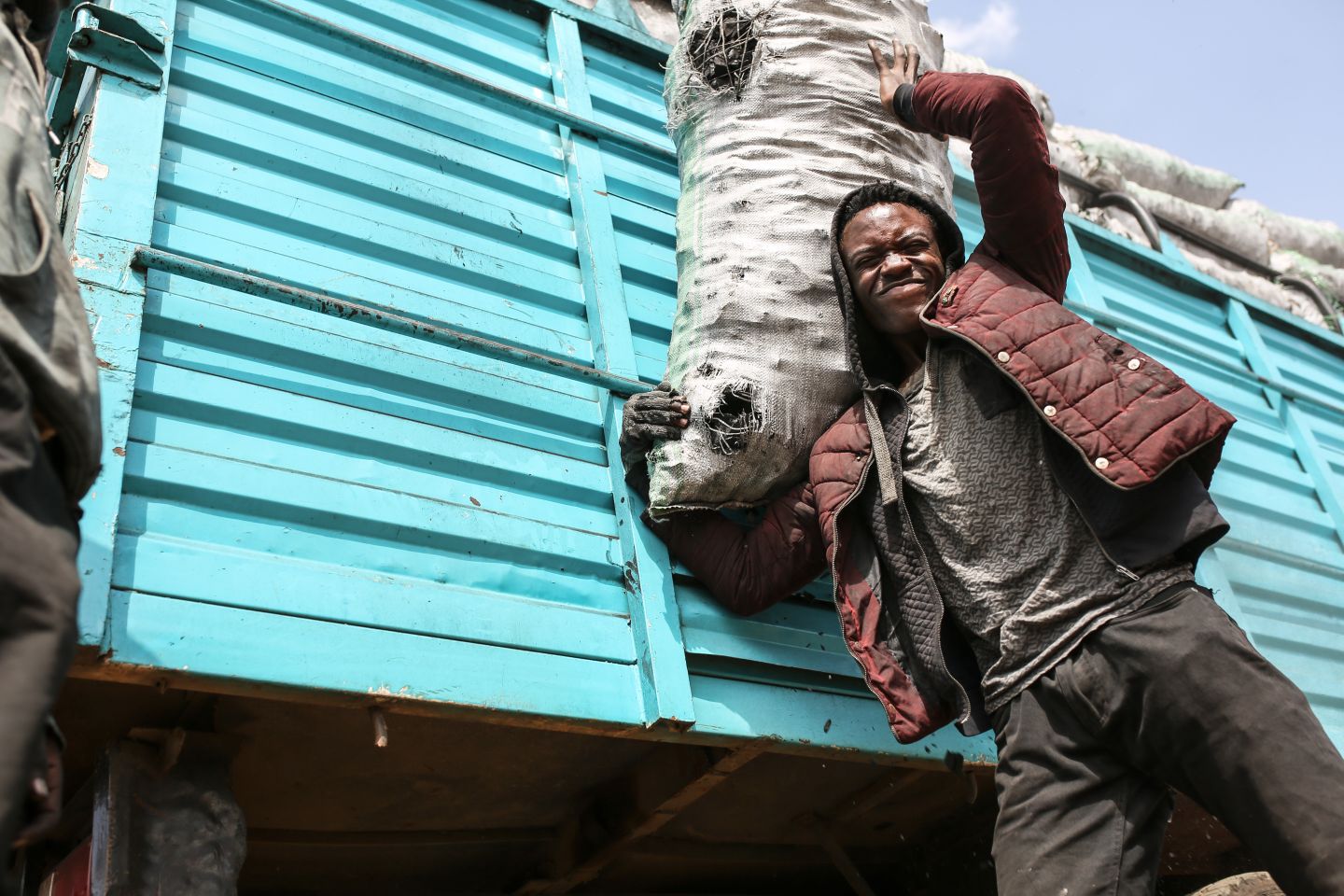 A young man unloading charcoal from a truck. This trying work is one of the credible sources of income at the slum. Charcoal is still the most significant source of energy in Kibera, where only a fraction of the population receives legal and secure electricity. At the same time, its use and industrial production is increasingly controversial in the country due to the widespread deforestation. Moreover, there is increasing information about the health consequences of indoor air pollution as well. 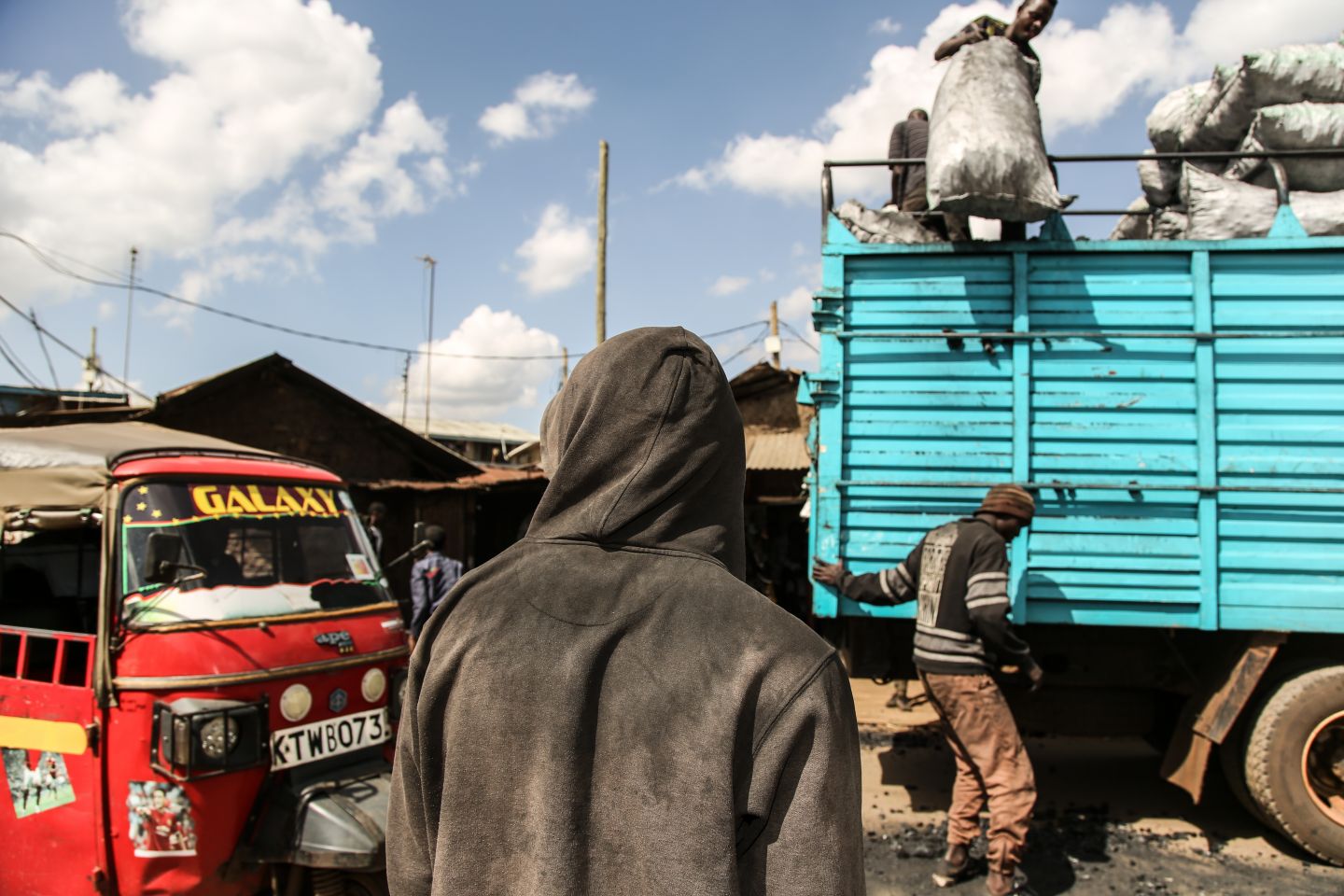 The Kenyan government in 2018 tried to introduce restrictive measures on trading with charcoal and on wood production, which resulted in a significant rise of charcoal prices. According to several sources, it is not a ban that would offer a long them solution to these problems, but sustainable production. 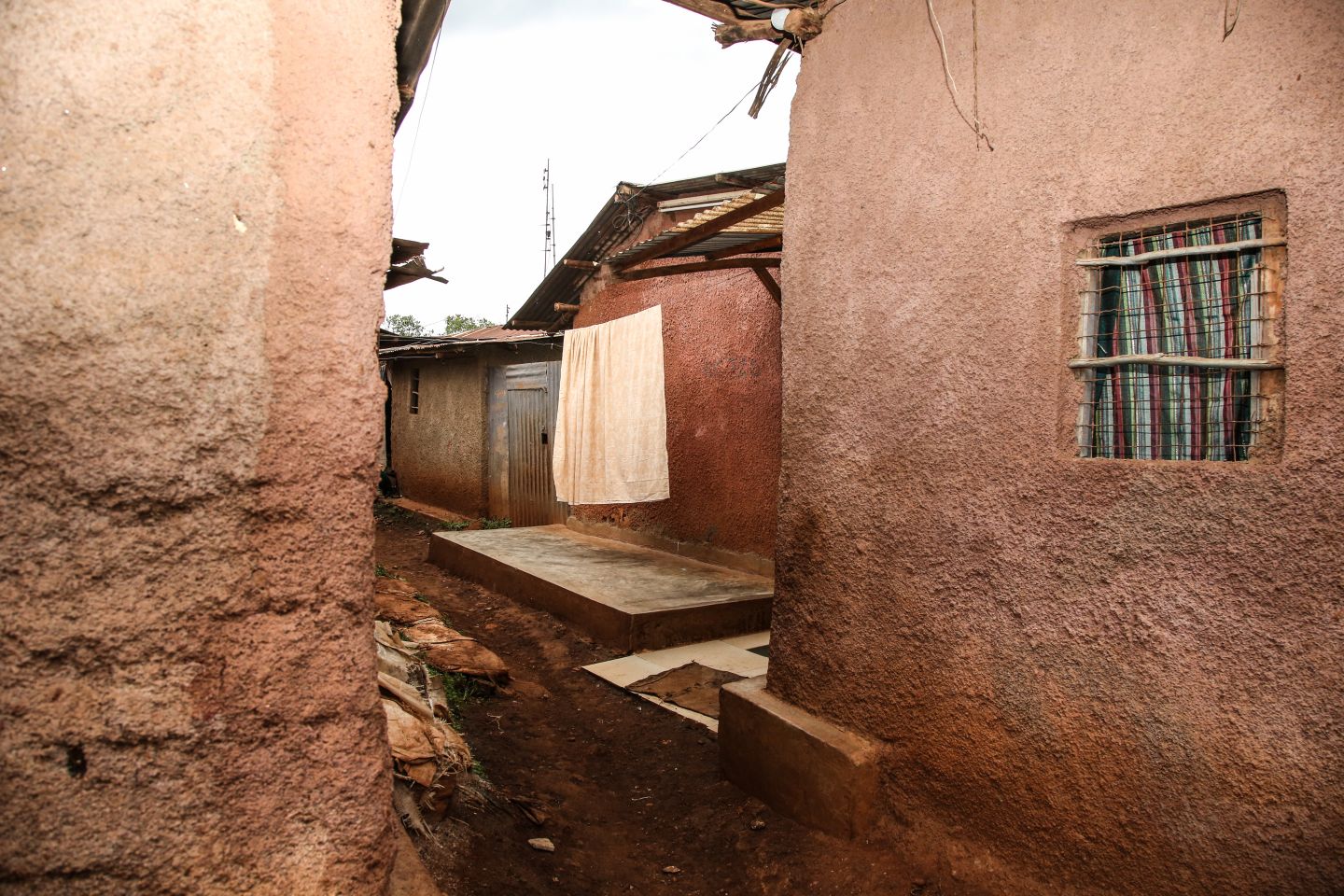 Houses of the Nubian sub-district. 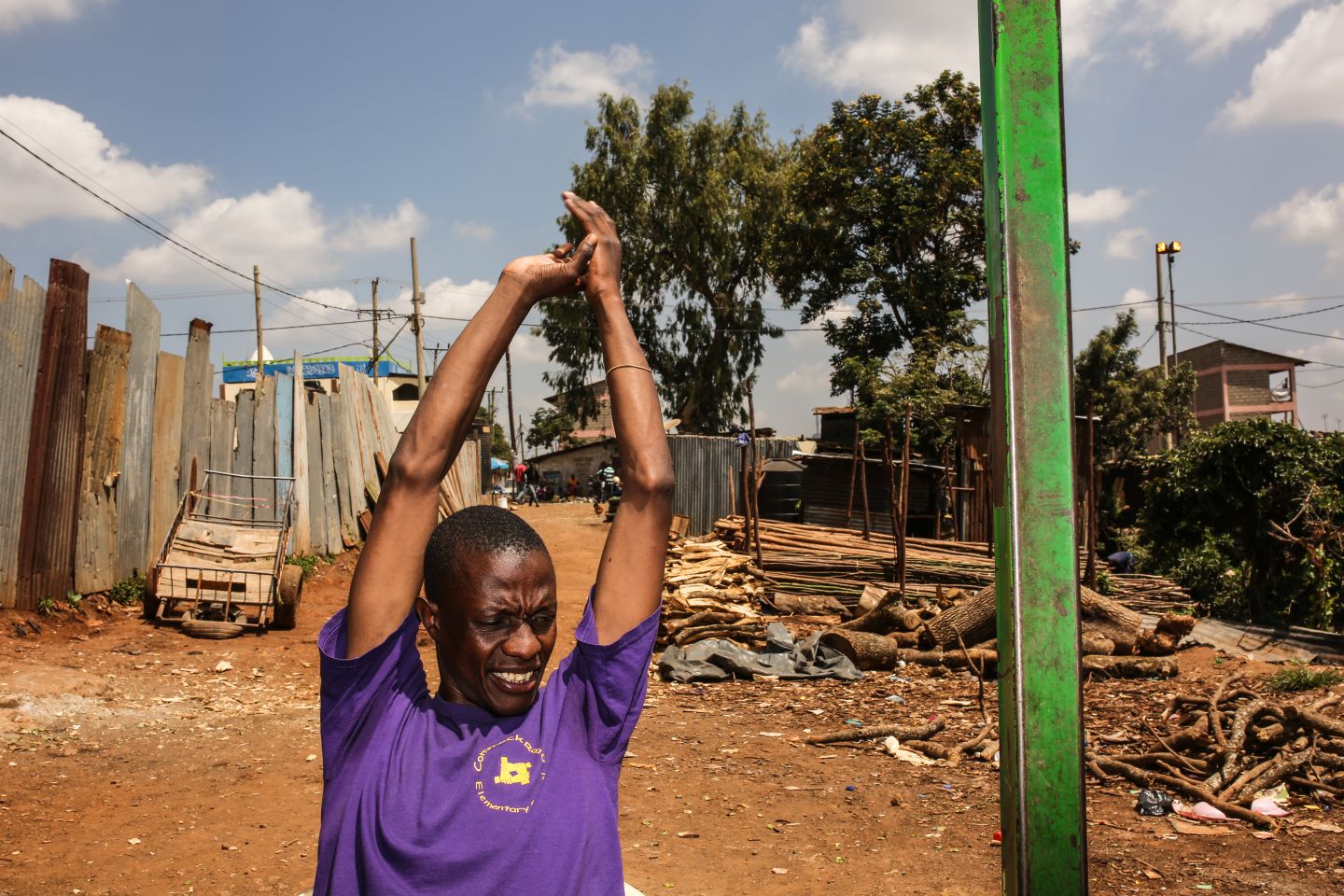 Kizush, my local leader in Kibera. Kizush is a proud owner of a motorcycle, that he uses to transport people. The boda boda or motorcycle-taxi, often unfamiliar with fear and the impossible, is an important means of transport in Nairobi, a city that is notorious for its overcrowded traffic. 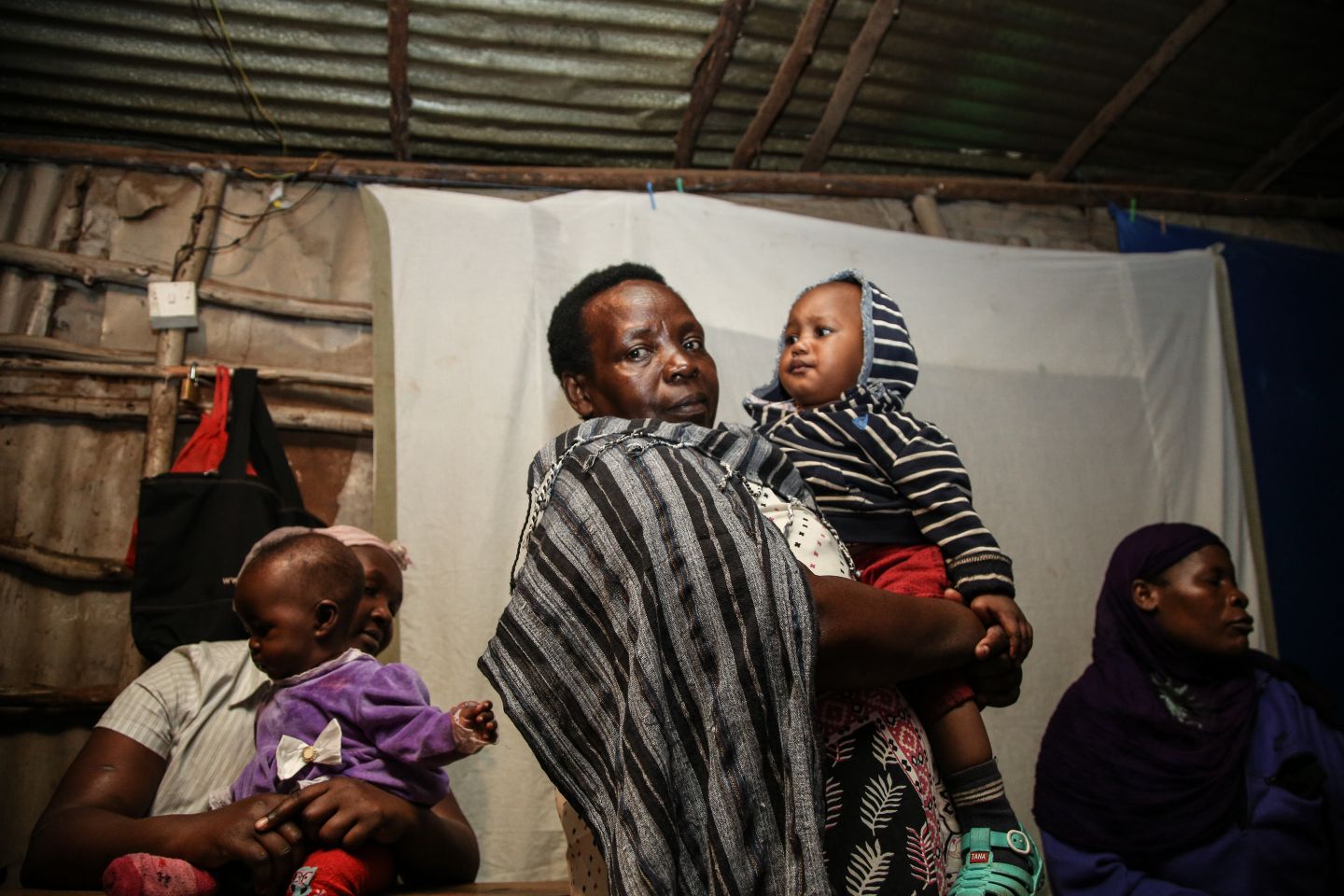 The mutual support of women in the community is essential for survival. We found several self-organized support groups in Kibera, often with the same systems that NGOs have, which aim to reduce women’s vulnerability. Professional training, entrepreneurship education, self-defence courses, elimination of discrimination for HIV-infected women, sexual edification: just to mention a few areas of impact. 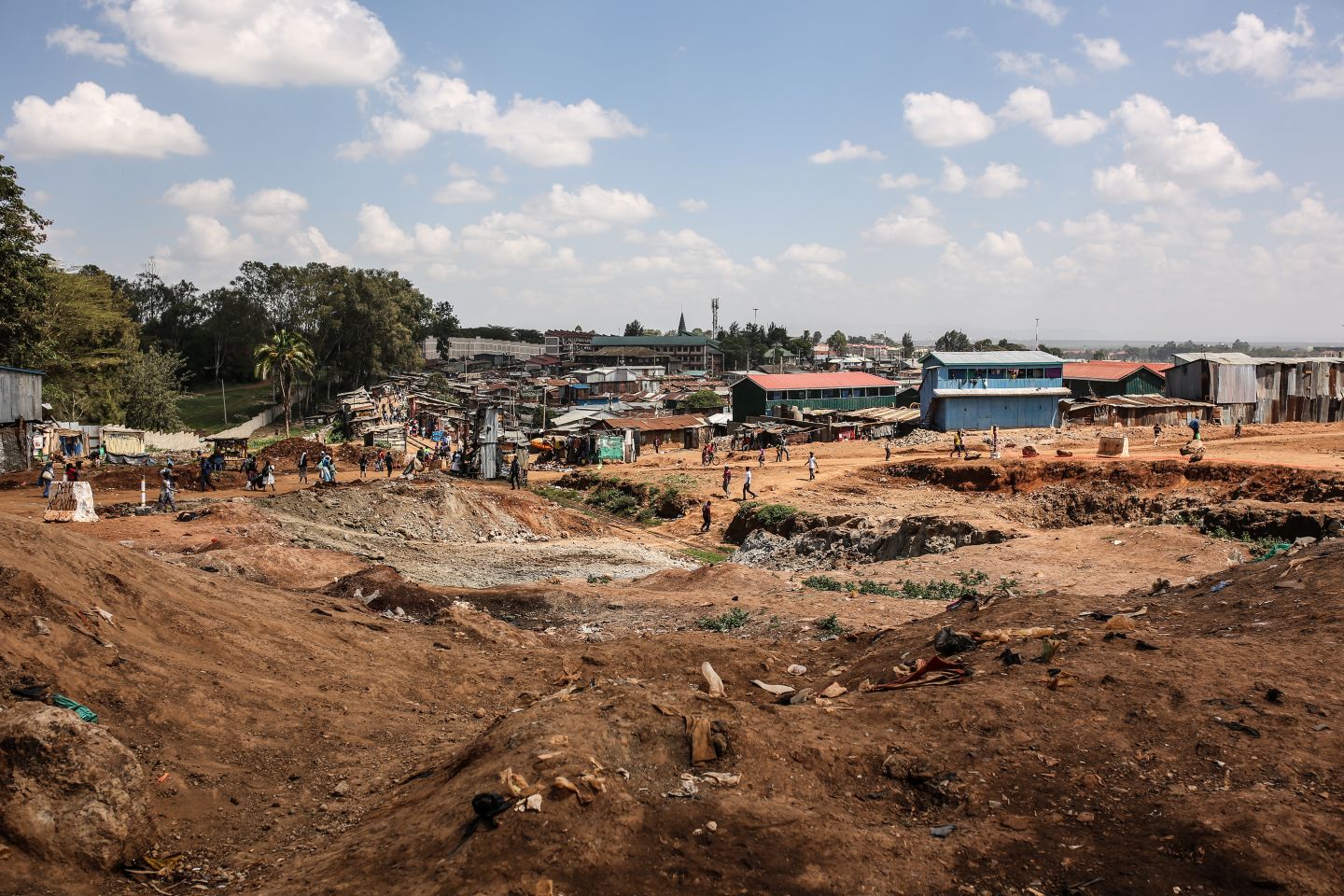 The stripped construction area of the new main road that spans the slum Almost two thousand families were evicted from the area in 2018, without any promise of compensation. As long as Kiberan residents can’t receive a title of land ownership and there is no official population register, the people living here are fully exposed to legal or illegal evictions resulting from real estate investments and infrastructure developments. The district is officially recognised as illegal housing. 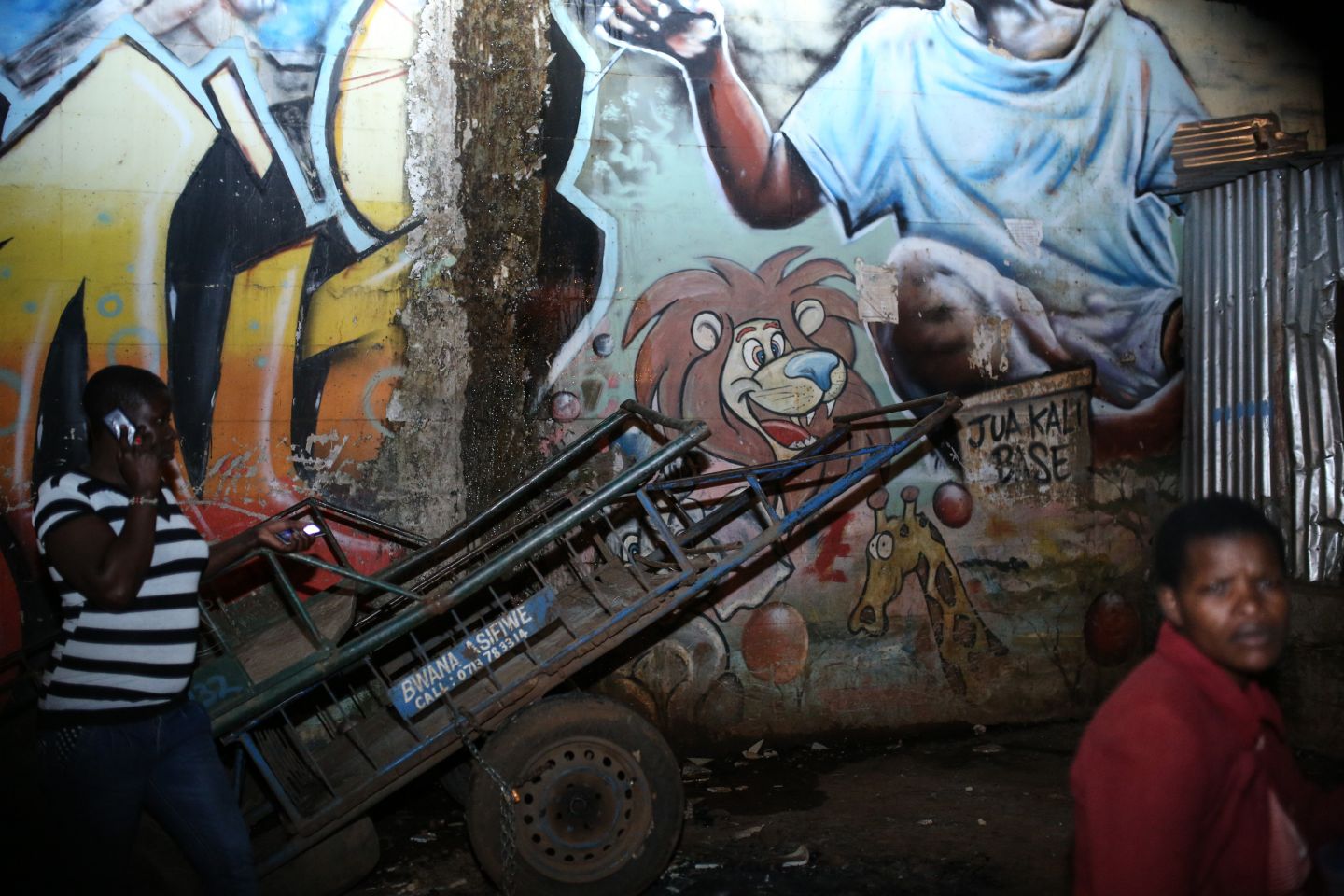 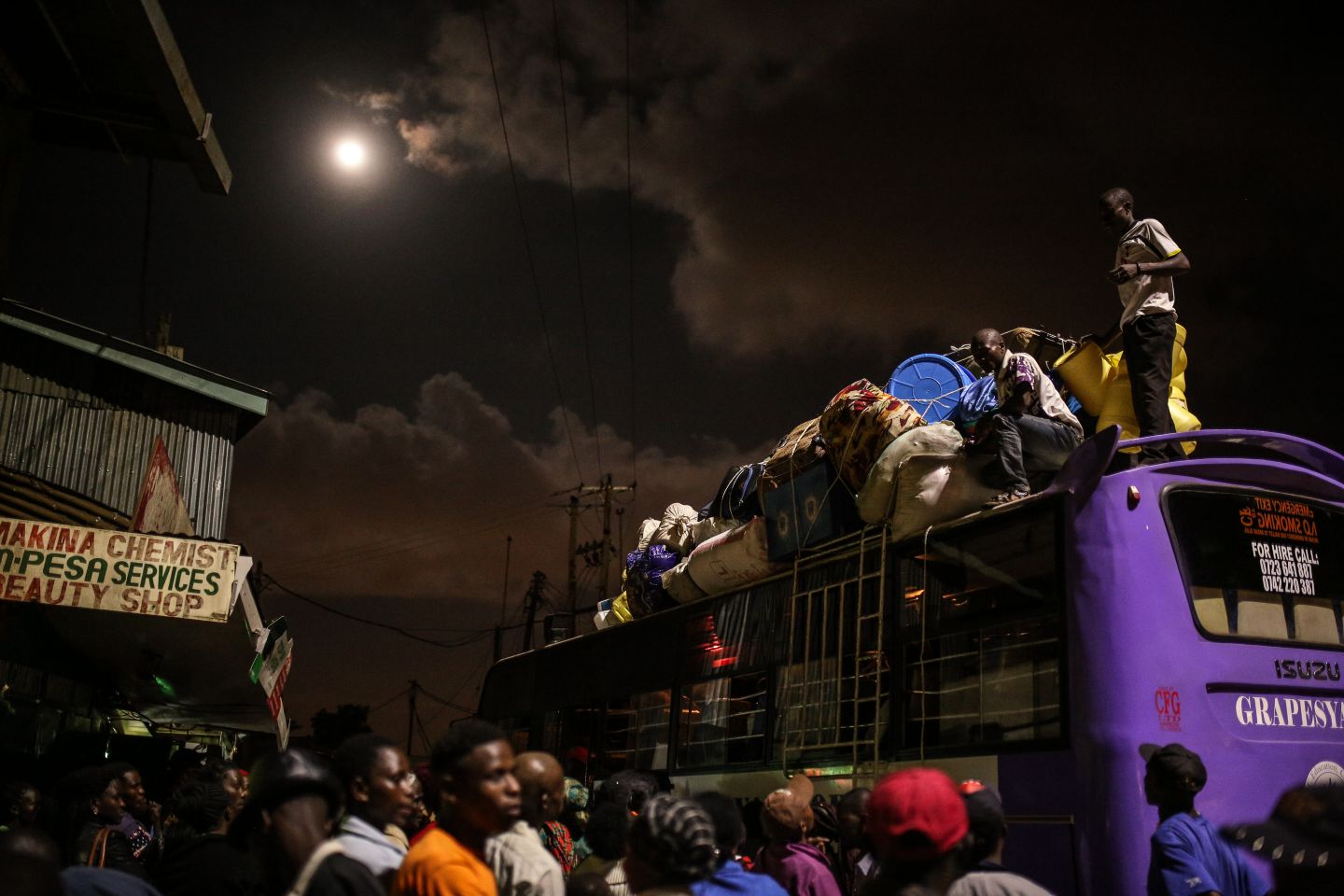 Passengers are preparing for the train (many of them back) to Uganda. Large cities have always been an attraction, especially for the rural population, so the fluctuation of the population is high in Kibera as well.

This article was originally published in January 2019 in Hungarian at Atlatszo.hu