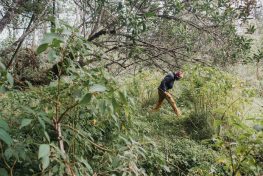 The International Day for Biological Diversity provides space to reflect on the supreme importance of biodiversity for all of life on Earth. The pandemic has laid bare the stark reality that human livelihoods are inextricably linked to strong, healthy ecosystems.

Yet, the world faces an immense challenge in confronting rapid biodiversity loss occurring across land-based and marine environments.  Science tells us that the rate of species extinction is accelerating at unprecedented levels, risking the sustainability of our planet.

Yet, threats to biodiversity continue to be exacerbated by a culture of denialism or indifference among the most powerful and wealthy sectors of human society, who disregard these essential truths for profit or political pandering.

Solutions are in nature

The theme for this year’s International Day for Biological Diversity is ‘our solutions are in nature’, recognizing that many of society’s most intractable problems can be addressed by restoring the relationships between human beings and nature.

This not a novel concept for indigenous peoples who have lived in harmony with their environments, safeguarding biodiversity since time immemorial, as demonstrated by the fact that indigenous territories comprise 22% of the world’s land surface, but contain 80% of its biodiversity. Environmental sustainably is a necessity for many indigenous communities, whose physical needs, cultural identities and traditional ways of life are intimately connected to nature. In turn, their territories are havens of diverse flora and fauna, rich in resources and rare species, evidence of their unassailable track record as the world’s best environmental custodians.

Yet, for far too long and in far too many instances, protecting nature has meant separating indigenous peoples from their natural environments. The prevailing mode of conservation, dating to the colonial era, is premised on the assumption that human habitation is at odds with environmental integrity. Instead of recognizing and rewarding indigenous communities for defending and nourishing biodiversity within their homelands, they are often evicted to make way for protected areas (national parks, game reserves, wildlife sanctuaries).

Despite comprising only 5% of the global population, approximately 50% of protected areas have been created on the traditional territories of indigenous peoples.  This ‘fortress conservation’ approach is exemplified by a wholesale disregard for indigenous land tenure, dispossession of indigenous communities from their ancestral lands and their exclusion from accessing their territories and resources.

Should indigenous peoples attempt to return to their natural environments for food, resources or to access their cultural and religious sites, they are often met with extreme, often fatal violence at the hands of increasingly militarized eco-guards, trained and funded by international conservation NGOs to maintain this separation between humans and nature. Overnight, traditional hunter-gather groups are cast as criminals, poachers, and squatters on lands they have traditionally and sustainably occupied for generations.

With State parties to the Convention on Biological Diversity committing to conserve at least 17 percent of terrestrial areas through protected area management, fortress conservation represents one of the single largest threats to indigenous lands and livelihoods, whose impact on protection of biodiversity is, as a consequence dubious.

Not only does this approach infringe on the human rights of indigenous peoples, it will fail to protect the environment. Evidence shows that void of the responsible stewardship of indigenous peoples, protected areas fail to achieved positive conservation outcomes. In 2019, the Intergovernmental Science-Policy Platform on Biodiversity and Ecosystem Services, published a report that found that biodiversity is declining at significantly faster rates in areas not managed by indigenous peoples.

With more than one million plant and animal species facing extinction, scientific research is increasingly pointing towards how indigenous-governed territories perform better than State-controlled protected areas in fostering and maintaining biodiversity.  Despite this, indigenous rights to ownership, control and access to their lands and resources remains poorly integrated into international conservation frameworks and initiatives.

Today it is vital that states, intergovernmental bodies, donors, international conservation NGOs and others account for promises made to respect indigenous rights in conservation, including their right to free, prior and informed consent.  This means desisting immediately from subjecting indigenous peoples to abusive conservation practices.

The answers to our problems will not come from western science bereft of empathy with flora and fauna, but from the ancient practice of those who know best.

Absent this, ecosystems will continue to deteriorate, species will be lost and human well-being will suffer.