Kashmir: A tale of two lockdowns 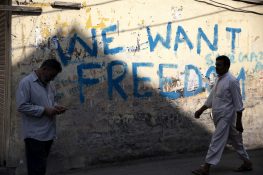 The world is currently facing extremely stringent restrictions on freedom of movement. Across continents, people are being asked, and sometimes forced, to stay at home and not go to work unless it is absolutely essential. In Indian-administered Kashmir, restrictions on freedom of movement are nothing new, and the region has been under a strict lockdown since August 2019 when the Indian government revoked its semi-autonomous status. In January, when the first COVID-19 lockdown was taking place in Wuhan, China, the people of Indian-administered Kashmir had already faced months of communication restrictions, alongside ongoing heavy-handedness on the part of the Indian state.  By March, the first case of COVID-19 was detected in Indian-administered Kashmir and the lockdown which began months earlier was compounded, leaving the lives of Kashmiris fraught with uncertainty for the future.

In Indian-administered Kashmir, the COVID-19 lockdown has taken the form of a state-wide curfew which has forced 12.6 million people to stay at home or face the military on the streets. It was imposed in March after the detection of its first case, just over a month after the Indian government had started to ease ever so slightly a lockdown which had started in August 2019.

More troops have since been sent to Kashmir, as well as the implementation of a partial shutdown of communications offline and online, making it extremely difficult for Kashmiris to communicate with the outside world. In an interview with France 24, a resident of Kashmir said: “We are in a cage, we are totally cut off from the rest of the world. We don’t know what’s happening outside and what the solution of our problem will be in the future”.

The Indian government enforced the August 2019 lockdown over Kashmir by shutting down internet access and phone lines, sending additional troops to the region, and arresting prominent Kashmiri opposition politicians. This was done the day before the announcement by the Home Minister to revoke the special status of the Muslim-majority state, effectively cutting off the Kashmiri population from outside communication.

The COVID-19 lockdown has in many ways resulted in an intensification of the lockdown which began in August, with a government spokesperson saying publicly that “strict action would be taken [against anyone who] publicly criticizes the efforts of the authorities to combat the COVID-19 pandemic”. This has translated into health workers and journalists exempt from lockdown being harassed by the Indian forces.

A struggle to stay connected

Although some communication restrictions have been restored in 2020 in response to challenges by civil society, this has only slightly eased the virtual blackout in Indian-administered Kashmir. The state still finds itself with no 4G internet – a common occurrence for Kashmiris who experienced 55 internet blackouts during the 2019 lockdown, according to Time. In the context of the COVID-19 pandemic and the physical distancing  it necessitates, the impact of these restrictions take on new dynamics.

Doctors in Kashmir have also spoken out anonymously about the restrictions in place, explaining that “every day, there is something about the virus that we must know in order to keep pace with our research, but we are not able to access it properly because of the 2G speed”. In addition, the 2019 lockdown had depleted the healthcare system to such an extent that Kashmiris were left with 97 ventilators for a population of 12.5 million people.

In 1950, Articles 370 and 35A were introduced in the Indian constitution, granting Kashmir autonomy, in all areas except defence, communication and foreign policy. Nevertheless, Hindu nationalists have contested autonomous status from the outset, not wanting special exceptions in the constitution in favour of Muslim-majority states. This was solidified in the political agenda when Narendra Modi, leader of the Hindu nationalist party the BJP and Prime Minister of India pledging to revoke its special status 2019.

In a Time article, a Kashmiri lecturer, Nitasha Kaul, explained that “the fact that Kashmir had a special status was not widely known among Indians generally until recently. As awareness around Kashmir has grown, the BJP argument has presented Article 370 as something that causes separatism in Kashmir”. This fuelled the Hindu nationalist cause across India, legitimising the curtailment of rights of religious minorities by the State. According to Reuters, Indian security forces arrested more than 3,800 people between August and September 2019, as protests against the lockdown escalated.

What the COVID-19 pandemic has exposed in Kashmir are the deepening inequalities surrounding access to information which has been directly caused by the Indian government. Kashmiris are now unable to protect themselves properly against the virus and have no recourse to outside help due to the stringent restrictions on their freedom of movement. Many Indian news outlets have reported on the concerning figures of the Kashmir health system wherein there is approximately one doctor per 3,900 inhabitants. This is symptomatic of a Hindu nationalist agenda which demonstrates a lack of concern for the right to healthcare of a minority population in their jurisdiction.