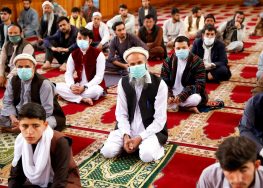 The COVID-19 pandemic is worsening the impact of existing conflicts and increasing the risk of mass violence according to new data gathered by Minority Rights Group International (MRG) and the Ceasefire Centre for Civilian Rights.

This year’s Peoples Under Threat index underscores how, while some threatened minority and indigenous communities are systematically more exposed to the illness, others are scapegoated in conspiracy theories regarding the origin of the pandemic,  while yet others face difficulties accessing healthcare services due to their remote locations or systemic discrimination.

The index uses authoritative indicators to identify those countries around the world most at risk of genocide, mass killing or systematic violent repression. Although the highest-ranked countries remain mostly the same as last year – with Syria, Somalia, South Sudan and Afghanistan at the top, closely followed by Yemen, Iraq, and the Democratic Republic of the Congo, then Sudan, Pakistan, and Libya, this year’s edition of the ranking marks a clear rise for countries such as Burkina Faso, jumping 25 places to the 45th position, Indonesia, up 18 places to the 51st position, and Cambodia, now 46th, up 17 places compared to the 2019 edition of the index.

‘Coronavirus has made all people feel under threat, but for minorities and indigenous peoples living under threat is neither “unprecedented” nor the “new normal”, but merely an extension of daily vulnerabilities, augmented by the virus’, says Joshua Castellino, MRG’s Executive Director. ‘Communities affected by violence and conflict are exposed to daily hardships, but as the virus hits, these will be exacerbated, calling for urgent attention to the notion of human security and ensuring it is a right for all.’

Regarding Africa in particular, there are five countries among the top ten. Looking further down the list, the top 20 include Nigeria, the Central African Republic, Ethiopia, Cameroon, Burundi, Eritrea and Mali.

‘All the factors that cause conflict are present in these countries. Climate change, socio-economic inequalities, competition for scarce resources and bad governance are all combining and driving communities against each other’, explains Agnes Kabajuni, MRG’s Africa Regional Manager. ‘The proliferation of firearms and extremist ideologies are all but making it easy for conflicts to ignite and escalate.’

A key issue that runs throughout the ranking is the absence of good governance. It is in situations of political instability that COVID-19 hits minorities and indigenous peoples the hardest, reinforcing the precarious situation of populations that have previously been affected by economic collapse, mass migration and displacement as well as food scarcity, such as Venezuela’s Afro-descendants and indigenous peoples. Armed conflicts moreover often bring about (or reinforce) healthcare limitations in capacity and procurement, leaving existing neglected minorities in even greater risk of sickness and death, such as Iraq’s Yezidis, Bahá’ís or Mandaeans.

‘International leaders are fond of saying that we’re in in this together, but in reality both governments and armed opposition groups in the world’s conflict zones are weaponizing the pandemic to gain a short-term advantage, seeking to deny medical or sanitary supplies to their enemies or even targeting hospitals and clinics for attack’, emphasises Mark Lattimer, Executive Director of the Ceasefire Centre for Civilian Rights.

The millions of people displaced by these conflicts and living in crowded refugee camps across the world are particularly at risk of COVID-19. Isolated by lockdown measures, deprived of medical aid, supplies and personnel, displaced populations often living in informal settlements constitute worrying potential centres of diffusion for the virus. The camps located near Idlib in Syria and Yemen’s Marib governorate are at especially high risk, as are the camps around Cox’s Bazar in Bangladesh, housing nearly 1 million Rohingya who have been rendered stateless but have so far survived ethnic cleansing of such intensity that the Myanmar government stands accused of genocide.

Although some reassuring news of COVID-related ceasefires have somewhat watered down the risks to which war-affected populations might otherwise have been exposed, the pandemic has also strongly hindered international solidarity and cooperation. As the world’s borders closed abruptly, funds as well as the public’s attention was drawn to an almost exclusively domestic crisis management agenda, depriving countries such as Yemen and Libya of much-needed international cooperation in mediation efforts. International human rights enforcement mechanisms, including crucial investigations into alleged abuses, have also been suspended in numerous countries.

This is the 15th year that the Peoples under Threat index has been released by MRG, joined in recent years by the Ceasefire Centre for Civilian Rights. It is based on indicators from authoritative sources and continues to provide early warning of potential mass atrocities.

‘As levels of threat rise and mutate, we look to reflecting these more clearly, and predict that as global levels of uncertainty grow, the threat levels will increase’, Castellino adds. ‘We said “never again” to genocide when the UN was built, yet today rising xenophobia, hostility and scarcity of resources make for a toxic mix that needs to be followed closely, combined with innovative action toward mitigation and change, as called for by social movements including climate activists and #BlackLivesMatter’.

The 2020 edition of the Peoples Under Threat index focuses on the various ways the COVID-19 pandemic is worsening the situation of minorities and indigenous peoples at risk across the globe. The index combines internationally recognised rankings to identify those countries around the world most at risk of genocide, mass killing or systematic violent repression.

The calculation of the index includes indicators of democracy or good governance from the World Bank; conflict data from the Heidelberg Institute for International Conflict Research and the Center for Systemic Peace; data on the number of refugees, internally displaced persons and other populations of concern from the UN High Commissioner for Refugees (UNHCR); indicators of group division or elite factionalisation from the Fund for Peace and the Carnegie Endowment for International Peace; the US State Failure Task Force data on prior genocides and politicides; and the country credit risk classification published by the Organization for Economic Cooperation and Development (as a proxy for trade openness).

Feature photo: Afghan men take part in prayers during Eid al-Fitr, the Muslim festival marking the end the holy fasting month of Ramadan, at a mosque amid the spread of COVID-19 in Kabul, Afghanistan. REUTERS/Mohammad Ismail