Tell it with song: Music to raise awareness on COVID-19 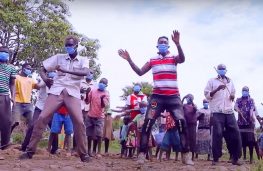 Christine Kandie is a representative of the Endorois minority community in Kenya. She works for the Endorois Welfare Council (EWC), advocating for social justice and inclusive development for the Community and other minority groups. Recently, the EWC partnered with Sangol Kimaru, a local artist, to produce a song about COVID-19 prevention.

MRG Africa’s Geoffrey Kerosi, sat down with her to learn about the experience.

Why did you choose music as a vehicle for raising awareness on the COVID-19 pandemic?

We settled on music as a mode of communication because music is popular in our community and the messages it conveys are easily remembered. Information from the Government’s health agency is either in Swahili or English – whereas not all our people are versatile in these two languages. We also realized that music is relatable and effective when used to convey messages in our native language. The majority of the Endorois people like listening to music and our target audience is youth, who have smartphones and can then share the music video with other family members.

What are some of the key messages conveyed through the music?

The video raised awareness on the emergency of COVID-19, on the way it is transmitted and how community members can stay safe from infections. The music conveys messages about washing hands, social distancing, covering your mouth with your elbow when sneezing and avoiding kissing during the pandemic. It also emphasizes the central role prayer play in ending the crisis among the Endorois people.

It was our first time recording a music video clip with that artist, Sangol Kimaru. It was his first video recording as well: previously, he had only recorded audio music. We started the process by identifying an artist from the community and contacted Minority Rights Group (MRG) to provide financial support as part of its COVID-19 response. At first, we thought that music production was too expensive, until we made an inquiry with the producers: they agreed to do the audio and video music production for our community at an affordable rate.

I lead the process of selecting the appropriate locations for video shooting. All of these locations were within the Endorois community lands. We wanted to kill two birds with one stone, that is conducting an awareness campaign on COVID-19 while promoting our culture through the video. We also facilitated the supply of Personal Protective Equipment (PPE) and provided logistics for the artist and the video production team. Community members were very supportive during this process.

Minority Rights Group also played a central role in this process by providing technical support with financial support from Ministry of Foreign Affairs Finland. Finally, the County government of Baringo also provided an additional motor vehicle, which we used for logistics during the shooting.

What has the dissemination process of the video been like so far?

We have been disseminating the COVID-19 awareness music video mostly on WhatsApp Groups run by members of the Endorois Community. Tamuka International, the artist, also shared the video on his YouTube channel, where it has gained a lot of traffic. Endorois youth have been active in sharing and commenting on the video on social media. Finally, I too shared the video with the local radio station (Alpha Radio) for further dissemination.

What are some of the challenges you came across during the production of this video?

In everything you do, there are challenges. For instance, the first producer we had identified was not trustworthy, as he failed to turn up for the video production, even though he had been paid already. Secondly, the artist being relatively unknown to producers, the latter did not take him seriously at first, thinking he couldn’t afford to pay for their video production services.

What advice would you give to other ethnic minorities and indigenous communities willing to use music to raise awareness on issues affecting them?

Firstly, many communities around the world have rich cultures and traditional practices. However, most of them are passed via word of mouth. It is important for these communities to document their culture. One of the ways they can do so is through the use of video recording.

Secondly, communities need to tell their stories and educate their members through social and traditional media platforms. This will lead to people’s recognition and appreciation of the communities’ cultural practices. Let us embrace music as a tool of communication as members of indigenous and ethnic communities in Kenya and around the world.

Music has been used for centuries to educate, raise awareness, provide comfort for communities and preserve cultures by passing from one generation to another.