Minority Rights Group > News > News and blogs > COVID-19 pandemic threatens us all, but can we unite to fight it instead of fighting each other?

COVID-19 pandemic threatens us all, but can we unite to fight it instead of fighting each other? 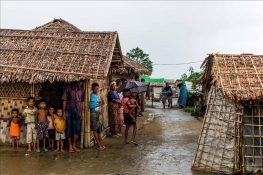 Clashes between Myanmar military forces and the Arakan Army (AA) have escalated in recent months whilst the world has been focusing on the global health pandemic. This is despite Myanmar accepting UN Secretary General Antonio Guterres’ call for a global ceasefire to preserve already fragile health systems in the fight against the “common enemy”: COVID-19.

The Tatmadaw and AA increase hostilities in Rakhine

Myanmar’s COVID-19 response is very much entwined with its ongoing internal conflicts. Myanmar’s military (known as Tatmadaw) was given the responsibility of heading the country’s COVID-19 emergency response committee by the National League for Democracy (NDL) government. This has enabled it to militarise its response to the virus, seizing it as an opportunity to escalate its assault against ethnic armed organizations.

In Rakhine, the Tatmadaw is aggressively pursuing the AA, a separatist armed group which is seeking to gain greater self-governance for ethnic Rakhine. Both the Tatmadaw and the AA have been able to operate with almost total impunity when their actions have impacted the civilian population, with residents of Rakhine having suffered exponentially in the last couple of years. An increase in the death toll and displacement of civilians has been observed by civil society as clashes continue between the Tatmadaw and the AA. This is coupled with long-standing grievances of acute poverty and stifled development in the State.

The AA was declared a terrorist group in March of this year by the NDL government which has emboldened the Tatmadaw to continue its attacks against the group and disregard in practice the global call for a ceasefire. This has led to a greater number of civilian arrests in Rakhine under a law that criminalises association with terrorist groups.

The AA has been accused of attacking and kidnapping civilians, causing fear amongst villagers. Some residents have made the difficult decision to aid AA fighters who come into their villages due to threats from the armed fighters, however this risks arrest by the Tatmadaw and life imprisonment. Journalists have also been affected by this declaration with those who have been found to have interviewed AA fighters being charged under the 2014 Counter-Terrorism Law.

The Tatmadaw have been accused of burning down villages in Rakhine. Around 200 houses were burnt down on May 16th in Lekka, or Let Kar, an ethnic Rakhine Buddhist village. Villagers from Lekka witnessed the fires happening as they were in nearby camps for internally displaced persons following clashes from April last year. The belligerents were identified by the villagers as belonging to Light Infantry Battalion 8 under the Tatmadaw’s 44th Division. Satellite imagery is shown to be consistent with accounts by villagers of the incident.

Similar incidents in other villages have also been reported and verified by satellite imagery. The burning of villages in Rakhine was a common tactic used by the Tatmadaw in 2017, particularly targeting the minority Rohingya community.

The recent clashes and arson attacks increase the vulnerability of communities to the spread of COVID-19 with infrastructure being destroyed and communities displaced. Humanitarian access to Rakhine has been severely restricted, curtailing the delivery of essential supplies. In late April, a World Health Organization (WHO) employed driver was killed in Rakhine whilst he was transporting COVID-19 test swabs to Yangon. The Tatmadaw and the AA both denied responsibility. Government-imposed internet blackouts have also become commonplace in Rakhine which deprives many from accessing vital preventative advice and medical guidance.

Special extended powers are reportedly being used to further discriminate and disenfranchise minority groups. Rohingya who are caught not wearing face masks are fined or punished, and even those who are wearing masks have been fined for no discernible reason by the police.

Proper systems for water, sanitation and hygiene have not been implemented in camps for displaced Rohingya in Sittwe, creating ideal circumstances for communicable diseases like COVID-19 to spread. Furthermore, the government has not allowed for testing to take place in camps, and it has failed to provide sufficient food and personal protective equipment (PPE) supplies to the camps.

The risk is increased as ethnic Rakhine flee to Sittwe to escape the ongoing violence caused by the Tatmadaw and the AA clashes and intimidatory measures against civilians, further saturating an already overcrowded community of internally displaced persons.

To aggravate the situation, ethnic Rakhine squatters were ordered on May 14th to leave more than 1,000 shelters built in Seyton Su, a former Rohingya area in Sittwe township, or face eviction. However, this eviction order was revoked on May 19th owing to frustration from Rakhine residents who complained that the government did not propose an alternative place of residence to the squatters. The revocation of the eviction order risks heightening sectarian tensions as it validates the take-over of Rohingya owned properties, making it harder for justice and restitution to prevail.

Other ethnic areas have also been targeted by the Tatmadaw, with shelling reported in Karen, and attacks against medics in Shan State who were carrying out COVID-19 awareness campaigns. These actions in ethnic minority populated areas of Myanmar diverges from the government’s promise of “leaving no one behind” in its COVID-19 measures and is in stark contrast to its response in central Myanmar which has seen upgrading of medical centers and enacting social distancing/hygiene campaigns in the Burmese language.

Before completing her mandate on April 30th 2020, former Special Rapporteur on the situation of human rights in Myanmar Ms. Yanghee Lee called for an immediate investigation  into allegations of ongoing war crimes and crimes against humanity occurring in Rakhine to ensure there would not be a repeat of the systemic failure that occurred in 2017.