The contrasting experiences of Indigenous groups during COVID-19 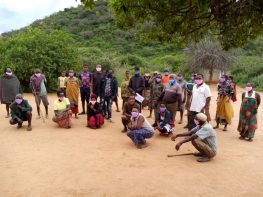 Indigenous communities around the world have faced a heightened risk of contracting COVID-19 owing to inequitable socioeconomic circumstances and poor access to essential services such as healthcare. However, some Indigenous groups have been able to sustain themselves during this pandemic through government assistance and maintaining their right to access indigenous lands, territories and resources.

The contrasting experiences of the Hadzabe/Hadza in Tanzania and the Batwa/Twa, also referred to as Historically Marginalized Peoples* (HMPs), in Rwanda are exemplary in this regard. This is particularly interesting because the Hadzabe’s experience in Tanzania has seemed to be more positive than the HMPs experience in Rwanda, despite the fact that the international community has rated the Rwandan authorities response to the outbreak much more highly than that of Tanzania.

The experience of the Hadzabe in Tanzania

In Tanzania, the economy was posed to be more important than tackling the spread of COVID-19. By 7th July the official count of confirmed cases stood at 509. However, the government stopped publishing data on 29th April and contends that the pandemic has ended in Tanzania. There have been accusations of cover-ups and the World Health Organization (WHO) has been sceptical about the country’s COVID-19 strategy.

The Hadzabe live in northern Tanzania, numbering up to 1,500 estimated peoples and are traditionally nomadic hunter-gathers. In 2011, the Tanzanian government handed down a landmark decision of officially conferring land certificates to a Hadzabe community of 700 people. In 2012, 12 more communal land titles were issued to Hadzabe communities. This has allowed some of the Hadzabe to use their indigenous lands for farming, grazing and hunting. The retention of lands also allows the Hadzabe to maintain a flow of income which can then be used for the greater good of the community such as money to pay off medical bills.

During the COVID-19 pandemic, access to land has proven to be an important way for the Hadzabe to sustain their livelihoods whilst many others in Tanzania have been hit hard by food insecurity caused by the socioeconomic effects of COVID-19. The Hadzabe on the other hand are able to supplement goods bought from towns with the abundance of nutrition provided by their traditional lands.

The Hadzabe have also not been left behind in the government’s COVID-19 response. Government officials have visited the Hadzabe to raise awareness and distribute flyers on the spread of COVID-19 and speak about preventive measures that the community can take.

The diverging experience of HMPs in Rwanda

The positive experience of the Hadzabe is not seen in the situation of HMPs in Rwanda. Unlike Tanzania, Rwanda had a strict lockdown and put into place restrictive measures to prevent the spread of COVID-19. It is reported that infection rates have decreased and Rwanda is thus no longer a COVID-19 risk area. Rwanda’s response was cited by Vedaste Ndahindwa who is a WHO epidemiologist to have been a well organised and effective response.

Despite this success, HMPs in Rwanda have been neglected by the government’s COVID-19 measures. This is due to a combination of factors ranging from past actions taken by the State that disenfranchise HMPs, and the lack of actions taken at present to shield them from the socioeconomic repercussions of COVID-19. Unlike the Hadzabe in Tanzania, in Rwanda, successive land policies have dispossessed many HMPs of their traditional lands. The vast majority of ancestral land tract which was remote forested areas has been converted to game reserves which HMPs are not allowed to enter. As a result of land confiscations, around 47 percent of HMPs do not have farm land which has caused many to lose out on income as 90 percent of Rwandans depend on farming as a means of employment.

Like other communities, HMPs have been given information about COVID-19 symptoms, how it is contracted, hand hygiene and how to curb its spread. However, the primary source for some HMP communities on news about COVID-19 is from unpaid persons who pass by villages every morning and convey through word-of-mouth what knowledge they may have on the situation.

HMPs have also missed out from the government’s food aid schemes during the pandemic.  One Twa woman reported that “when aid was being distributed, they skipped our houses.” Instead, NGOs such as the African Initiative for Mankind Progress Organization (AIMPO) and Women’s Organization for Promoting Unity (WOPU) respectively have taken up the role of distributing food and hygiene essentials to numerous Twa beneficiaries.

Many HMPs also fear the long-term challenges of the pandemic such as losing income from jobs that may require travelling to other people’s land, and jobs in the tourism industry which has declined due to travel restrictions. Lack of income leads to hunger and financial difficulties in implementing measures to stop the spread of the virus. Another Twa woman reports that “Honestly, I think that we are waiting for God’s help as death is at our doorsteps”. This comment was prompted by the lack of food in her house and not by any danger of succumbing to the virus.  As HMPs now mainly survive on selling labour in exchange for food items or scavenging from other people’s gardens as a result of the lack of land, their sources of income have been severely affected as Rwanda first forced and later advised stay-at-home orders.

When coupled with the lack of government assistance during this time, these consequences have had a dire effect on HMP communities.

Two major factors contributed to the difference of response to inclusion of Indigenous peoples in Tanzania and Rwanda.  The fact that the Hadzabe in Tanzania can fall back on hunting and gathering on their undisputed ancestral lands to supplement their nutritional needs during a period of crisis, is critical for their long-term health and welfare.  HMPs in Rwanda have been pushed off their land which has significantly increased their vulnerability to shocks and crises of all kinds.

Despite Rwanda’s insistence, since the genocide decades ago that “We are all Rwandans”, the existing vulnerability for HMPs was exacerbated by discrimination in aid distribution with certain households being overlooked or omitted when aid was handed out. The extreme poverty and vulnerability of HMPs, by which they work for others, may contribute to discriminatory attitudes whereby they seem to count for less or their needs can be ignored.

In contrast the Hadzabe in Tanzania with their lower exposure to market economies did not need so much assistance (possibly less than many other communities in Tanzania who were more exposed to the economic impacts) and seem to have been included in prevention and information measures appropriately with some NGO involvement.

NGOs in Rwanda worked hard to secure funding to meet the needs of their community (with the support of MRG and the European Union) and to avoid disaster, but only time will tell how many HMP children will have suffered health consequences of the hunger many experienced over the past 14 weeks.

As evictions of Indigenous communities in the name of conservation, development projects or cash crop production increase, we need to consider the vulnerability that such communities are exposed to down the line. It is not only their right to stay on and use land that their forefathers and mothers have cared for in sustainable ways for generations, it also shows us all that living locally, sustainably on land without cash cropping and extracting resources that cannot be replenished, has lessons for us all in times of crisis which we would do well to take note of.

*“Historically Marginalised People” is the non-ethnic term used to refer primarily to the Twa people or Batwa of Rwanda.