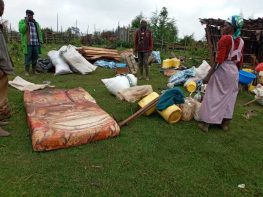 MRG and the Ogiek Peoples’ Development Programme (OPDP) strongly condemn the Government of Kenya’s recent evictions of Ogiek communities, directly defying the 2017 judgment of the African Court on Human and Peoples’ Rights (African Court), which upheld the Ogiek peoples’ rights to their ancestral lands in the Mau Forest.

Since 2 July 2020, the Kenya Forest Service (KFS) has engaged in a large-scale and deliberate campaign to remove Ogiek communities from their lands in the Mau Forest, prejudicing the implementation of the 2017 judgment. As of 9 July 2020, over 100 Ogiek families, including 9 families in Maasai Mau (approximately 600 people in total) had been evicted and rendered homeless. MRG and OPDP anticipate that more people will be added to the tally in the coming days, as these evictions continue.

‘The wonton destruction of property will have devastating economic consequences for Ogiek families who depend on subsistence farming and have been forced to abandon their crops and have nowhere for livestock to graze’, says Lara Domínguez, Strategic Litigation Officer at MRG.

The sudden and unannounced nature of these evictions has traumatised victims who were sheltering in their homes from the Covid-19 pandemic. Some members of the community have been injured. Hundreds of Ogiek houses, structures and fences have been demolished or burned to the ground.

These evictions have taken place without notice, in the midst of the Covid-19 pandemic and the rainy season, in violation of the Government of Kenya’s domestic and international law obligations. While the Government of Kenya had previously announced it would establish a moratorium on evictions during the pandemic, it has continued evicting people, including the Ogiek.

‘Evicted members of the Ogiek community have nowhere to shelter from the virus or the cold, inclement weather’, notes Daniel Kobei, Executive Director of OPDP. ‘Neighbours and relatives are being asked to take them in. We are concerned that the large number of people affected will inevitably result in overcrowded living quarters where the spread of the virus will do more harm.’

KFS’ increasingly brazen conduct flouts the landmark judgment in the Ogiek case, where the African Court ruled that by routinely subjecting the Ogiek to arbitrary forced evictions from their ancestral lands, Kenya had violated seven separate articles of the African Charter, including the Ogiek’s right to property and natural resources. Crucially, the Court recognized that the Ogiek are indigenous peoples and have a critical role to play in safeguarding their local ecosystems and in conserving their ancestral territories and resources. The Court specifically found that the Government’s conservation objectives could not be used to justify the Ogiek’s eviction.

Nevertheless, the Government of Kenya willfully misconstrues the African Court’s findings and continues to cite the need to conserve the Mau Forest to justify its actions.

‘Despite the Government of Kenya’s attempts to blame the Ogiek for environmental degradation, it is overwhelmingly non-Ogiek settlers who are responsible for destroying the forest’, explains Daniel Kobei. ‘Without formal legal recognition as owners, we don’t have the right to protect the land or keep them out ourselves’.

As of 11 July, KFS has ‘reclaimed‘ 45,000 hectares of Ogiek ancestral land in Eastern Mau. The areas are all in locations that the Ogiek claimed in their case and the African Court adjudicated in their favour. Astonishingly, Kenyan Government officials maintain that their actions comply with the 2017 judgment.

‘The core problem lies in the Kenyan State’s outdated approach to forest conservation’, comments Liz Alden Wily, a leading world expert on land and resource rights. ‘It persists in the failed vision that guns and fences will save forests. If only it would learn from global experience that granting ownership where it is long overdue empowers customary owners to conserve and enables governments to hold them firmly to account. Communities – and especially forest peoples where countries are lucky enough to have them – are already doing so successfully in all regions of the world including in Africa.’

Indeed, a way forward centered on making the Ogiek peoples’ customary rights to their ancestral lands effective, as required by the 2017 judgment and Kenyan law is possible. However, it requires the political will to do so. While the Ogiek community, MRG and OPDP continue to advocate for its implementation, the situation of the Ogiek is becoming increasingly desperate. MRG and OPDP are concerned that these latest evictions are just the beginning of a concerted plan to remove the Ogiek from their ancestral lands before the 2017 judgment is implemented.

‘It is telling that the Government has failed to release a report produced by a Task Force gazetted to implement the 2017 judgment, even though the final report was submitted to the Ministry of Environment on 20 March 2020′, says Lara Domínguez. ‘Failure to release the Task Force report has been compounded by delays in the reparations phase of the case before the African Court. The Government of Kenya is taking advantage of the situation and the Covid-19 pandemic to avoid complying with the judgment.’

In light of these ongoing abuses, MRG and OPDP demand that the Government of Kenya immediately cease all evictions, which are made worse by the Covid-19 pandemic. They further urge the Government of Kenya to release the Task Force report and to participate in the African Court process in good faith by fully complying with the 2017 judgment. Failure to do so will exacerbate the decades-long suffering of the Ogiek people and undermine the legitimacy of human rights institutions, particularly in the eyes of victims seeking redress for violations of their fundamental rights.