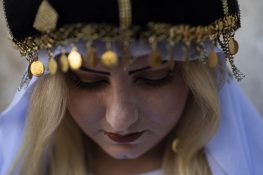 [Statement available in French and Arabic]

22 August 2020 – On this day set aside to commemorate victims of acts of violence based on religion or belief around the world, we stand together as civil society actors to honour those who have been persecuted and killed in Iraq for their religion or beliefs. Since the 2003 US-led invasion, Iraq has suffered internecine conflict and state collapse, degrading a once rich cradle of ancient ethno-religions and cultures. The Christian population, including ethnic Assyrians, which numbered around 1.5 million at the start of this century, has been reduced to a mere 200,000 today. Other minority communities such as Yazidis, Sabean-Mandaeans, Turkmen, Kak’ais, and Shabaks have faced existentialthreats in recent years.

ISIS exploited the concomitant deterioration of religious freedoms as part of their genocidal campaign against ethno-religious minorities across the Sinjar region and the Nineveh plains. The targeted violence sought to erase the presence of religious minorities in Iraq altogether, and particularly of the Yazidis, decried by ISIS as devilworshippers. ISIS executed those who refused religious conversion, and destroyed countless shrines, churches, temples, and other cultural sites. The effects of religious discrimination against minorities are widespread and intergenerational, as many of the displaced are reluctant to return to their ancestral lands for fear of religious persecution. This situation is compounded by the presence of militia groups in the Sinjar region and Nineveh plains and failures to meaningfully address governance concerns.

We welcome the efforts already taken to safeguard religious freedom and to counter narratives of violent extremism in Iraq, such as the Interfaith Statement on the Victims of ISIL endorsed by religious leaders from the Christian, Sunni, Shi’a and Yazidi communities, and supported by the UN Investigative Team to Promote Accountability for Crimes Committed by Da’esh/ISIL (UNITAD) and the UN Office on Genocide Prevention and the Responsibility to Protect. However, without justice and accountability for past atrocities, religious communities will continue to face persecution and the threat of repeated violence. Improving religious freedom is linked to holding perpetrators of genocide accountable, to providing secure conditions of return for minority communities, and to supporting those who have experienced the trauma of religious violence that drove them from their homeland.

We urge the Government of Iraq, the Kurdistan Regional Government, the United Nations, and the wider international community to take the following steps: