Minority Rights Group > News > Minorities > Christians > Saneha’s story: Why I care, and why you should too

Saneha’s story: Why I care, and why you should too 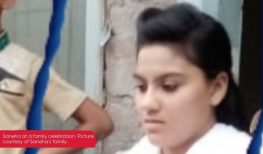 This blog was written by Claire Thomas, MRG’s Deputy Director, and published on the website of the Institute of Development Studies (IDS).

She was on her way to Church. Saneha Kinza Iqbal, a 16-year-old girl, was abducted last month in Pakistan by a man helped by two accomplices. She was raised a Christian, he is Muslim. He is almost twice her age, married with 4 children. The police, immediately asked for assistance by the girl’s family, did not offer any help, and finally presented ‘evidence’ that the child had converted to Islam. For the parents, there is no doubt: their daughter was forced to convert and then to marry her abductor.

As a parent of a daughter who turned 15 last month, this story has affected me very personally.  I think of this young girl, away from her family, unable to turn to anyone for help.  Whilst the family of her abductor/groom claim that she left of her own free will to marry, we have seen no evidence to suggest from her activities in the lead up to the events that Saneha wanted to do so.  If she were the only girl affected it would still be shocking and abhorrent, but in fact, we know that there is a tragic pattern of religious minority girls in Pakistan (mainly Christian and Hindu) being abducted, forced to convert to Islam and then marry their abductor.

Human Rights Commission Pakistan (HRCP) data reveals that in 2018, around one thousand cases were reported in the province of Sindh alone (pop. 48 million), but it is possible that the numbers are much higher as the authorities often fail to react or record the crime.

Whilst the cases of these girls are horrific, CREID research (as yet preliminary and unpublished) has revealed that this threat to religious minority girls has an adverse effect on their lives. Saneha was on her way to church when she was snatched.  Other girls have been on their way to or from school, meetings or shops.  Any time a religious minority girl leaves her house in Pakistan she, and her family, are aware of that threat and this has a chilling effect on many girls’ ability to live a normal life and participate fully and freely in activities outside the home. This impacts on the families as well as the girls and women. It harms social cohesion in Pakistan, undermines harmonious relations between people of different faiths, and goes flagrantly against the Pakistani government’s commitment to leave no one behind.

But there is hope. Saneha’s parents dared to speak up and let their voice be heard. They did not stop at the local police’s inability or lack of willingness to help them. They did not stop in the face of the difficult task getting protection and justice for their daughter, nor did they flinch when confronted by threats of violence if they don’t desist (which the family have received). Other families did not able to feel able to withstand threats to them (or their other children) and remained silent or accepted that the abduction was a fait accompli and could not be “undone”. Saneha’s parents have stood firm, and by doing so, they caught international attention.

They went beyond the immediate risks of their case, beyond their immediate pain and fears, and used their voice to not only try to save their own daughter but also speak in the name of the countless families in Pakistan who have lost a child to the clutches of similar abductions.

However, apart from responding to such cases, there is still a lot of work to be done.  Although child marriage was declared illegal in Sindh in 2014, an attempt to legislate for the same provisions across the whole country failed to be adopted by the National Assembly the same year.  Many voices remain in Pakistan who lobby against any law prohibiting child marriage. In Punjab Province, the legal age of marriage remains 16.  Numerous cases have shown us that religious minority girls are particularly vulnerable and that State systems fail to intervene or seek to achieve justice for them time and time again.

Yet, there is room for change. Pakistan has committed to eliminate child, early and forced marriage. In 2015, it pledged to the Sustainable Development Goals, which specifically target the practice (target 5.3). Pakistan ratified the Convention on the Rights of the Child in 1990, which sets the minimum age of marriage at 18, as well as the Convention on the Elimination of All Forms of Discrimination Against Women (CEDAW) in 1996, in line with which it has to ensure free and full consent to marriage (although this is subject to the provisions of the country’s Constitution). The Republic is also a member of the SAIEVAC action plan to end child marriage, as well as a number of other plans and conventions calling for an end to the practice of child marriage.

The time has come for the international community to step in and amplify the families’ voices, making them heard worldwide in the hope of getting justice for those who are denied it. This is why we have launched a petition asking Pakistan’s Prime Minister Imran Khan to ensure that Saneha appears before a Magistrate and chooses by herself where she wants to live – with her abductor/husband, with her parents, or at a refuge for women and girls.

In the name of our shared humanity, in the name of the ideal of human rights we all want to live by, each of us has to speak up. In Saneha, I see my daughter, and I see my neighbour’s child, I see my daughter’s classmates. in her I see every single young woman I know, every young woman I know of.  All young women everywhere live with the risk of grooming, harassment, attacks, abductions, enslavement rape, and sexual violence but for Saneha and girls like her in Pakistan, the total failure of the authorities to offer protection is tragic and wrong. I will not remain silent when “my daughter” is brutally abducted and married against her will with no action taken to even attempt to protect her. I will fight, and I will not stop until she gets justice. That is the ideal I want to live by.

This blog was first published on the website of the Institute of Development Studies (IDS) on 3 September 2020.