British actor Paterson Joseph will make an appeal for MRG 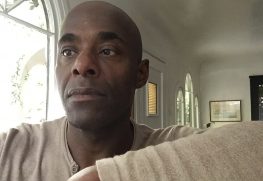 We’re excited to announce that Paterson Joseph, the acclaimed actor and writer, will present a donation appeal for Minority Rights Group International (MRG) on BBC Radio 4 this month. His own experiences of discrimination at school led him to choose our work on improving access to education for minorities and indigenous peoples as the story for our appeal.

While perhaps best known for his roles on television, including his inimitable portrayal of the suave, unhinged loan manager Alan Johnson in Peep Show, Joseph’s acting career was born in the theatre. “When I was 14 I was really taciturn – I hardly said a word – but then I auditioned for Shylock. With Shakespeare’s words in my mouth I suddenly felt I had a lot to say,” explains Joseph. An enduring relationship with Shakespeare saw him work with the Royal Shakespeare Company, win an Ian Charleson award, and play the tragic hero Brutus in Gregory Doran’s 2012 production of Julius Caesar, the first high-profile all-Black British Shakespeare production, set in Africa.

Born in Harlesden, London to Caribbean immigrant parents, Joseph’s school career was set back by discriminatory attitudes; he told us “from the ages of four and a half to fifteen, I was told that I was stupid, hopeless and destined for failure”, when “in reality, I was struggling with English as a second language.” Joseph went on to gain a diploma in Business Studies and worked briefly as a catering assistant before training as an actor. His substantial tv credits include Law & Order UK, Survivors, Babylon, Casualty, and The Leftovers. Most recently, he portrayed Kamal Hadley, the Prime Minister of a race-swapped Britain in the BBC’s adaption of Malorie Blackman’s novel series Noughts and Crosses. Joseph has also appeared in feature films, including In the Name of the Father and The Beach.

A desire for more period roles led Joseph to discover Ignatius Sancho, an eighteenth century man born on a slave ship who became an actor, writer, composer, and Londoner. Joseph’s one-man play Sancho: An Act of Remembrance uncovers some obscured footsteps from Britain’s black history and renders our shared narratives of Britain a little more capacious.  Sancho testifies to the ongoing resonance of history; At the end of a performance in Harlem, an elderly African-American woman stood up and shouted, “Sonny, that ain’t no old story – that’s happening to us today!”.

Of course, as Joseph says, “first of all I’m an actor, I happen to be black.” From silly sitcom Green Wing to James Baldwin’s Blues for Mister Charlie, his extensive career has mixed race-specific and non-race-specific roles. At MRG, we tackle discrimination so that the accident of birth does not define who you are or what you can achieve. In our appeal on Radio 4, Joseph will share a story from his schooldays about how discrimination impacted his education, how MRG has helped Twa children in Rwanda stay in school, and how you can help.

Paterson Joseph will present the appeal on the 18th of October on BBC Radio 4, both in the morning (7:54 am) and evening (9:25 PM). Make sure you tune in and donate!

“I’m ashamed I hadn’t heard about him before…”

Charles Ignatius Sancho was the first black man to vote in Britain. Actor Paterson Joseph (@ignatius_sancho) tells us a bit more about this little-known story. pic.twitter.com/WIYpR5nV9I