Minority Rights Group > News > News and blogs > If I were… Refugees and the cold, cold Europe

If I were… Refugees and the cold, cold Europe 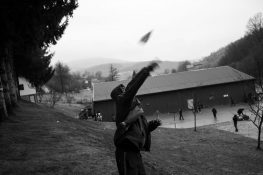 Bosnia, a stone’s throw away from the European Union. The temperature is below zero. Snow, wind, and a wretched gaze peeping from underneath the blanket. One gaze – or a thousand.

If I were… a child

Someone would surely take care of me. They’d find room for me in the camp, an extra blanket, maybe even some chocolate? Maybe some volunteer would even hug me? A humanitarian worker would stroke my head?

My parents, or one of them, or an uncle, would take me on the road. We call it: Game. We go game. We make game. I wouldn’t have to check the GPS. Or keep my phone somewhere dry. Buy the cheapest energy drinks available. Look around constantly. The adults would do it for me.

Or, if I were to look at least a little less grown up. Without papers, no one believes that I’m fifteen years old. Or seventeen. Or even twenty. But I’ve spent the last five on the road. A grown man, right?

If I were more educated

If I were to learn humanitarian law, preferably the laws of each country that I pass through. Perhaps then the difference between my old dreams and reality would be smaller.

Or, if I could speak fluent English. But I only know Pashto, Dari, Arabic, Turkish, and now a little Bosnian.

And so, people are afraid of me and I cannot explain to them that there is nothing to fear.

What would I want them to know? That to sit and have some tea together means a lot. Much more than this impersonal approach, throwing me a sleeping bag or a sandwich. And then, leaving, without looking me in the eye. Even when someone means very well.

I wish that someone would ask me about my children. About my parents. About my cousins or friends. I stay in touch with some of them. I cannot tell most of them what my life looks like. Sometimes, I’ll send them a photo taken at a café. But I make sure that you cannot see my dirty hair and clothes. I’ll call them on video once I get to Europe. After all, it’s embarrassing that I’m not doing so well.

If I were a woman

Single, no husband. Or with a family and child. It would be easier. Look how differently the Europeans greet women and children. I see it in films; I see it in real life. A smile, a hug. It is easier to hug a woman and it is easier to see her as a victim. I know, same for me. People talk about women as women, as a category. All over the world women show solidarity with other women. But when talking about men, the first thing mentioned is where they come from. Or their religion. Did you notice that?

Women are more likely to get attacked or raped. But to be honest, am I really less vulnerable?

Game lasts many days. You must reach north Bosnia. From Bihać, you have to go to Vučjak, a camp that no longer exists, because IOM and the local authorities destroyed it to get EU money. It was a terrible place, but we’ll go back there anyway. It is about four kilometres in a straight line from Vučjak to the border with Croatia. But in the mountains, there are no straight lines.

Usually, we leave at dusk. You never know when the Croatian police might show up. Sometimes at dawn, sometimes after three days of walking. “Deportation”, they tell us, before anyone can say they want to apply for asylum. Even though we have the right to do so. Then comes the beating: with batons or ordinary sticks. We are lying on the ground. Later, and I’m very ashamed to even say this, they piss on us. Often, they threaten us with weapons. Then they take our papers, phones, set fire to our backpacks. And then, at the end, and especially now that temperatures have gone below zero, they take our jackets and shoes from us. Yes, from children too. Going back to Bihać takes another few days.

If I were disabled

Instead, I sometimes warm up by the pipe that heats the aid organization’s container. Hands, feet. It’s not so bad in the camps. It’s much better than outside the camps. There are beds (although there might be several dozen in one hangar), there is warm food (although you have to queue for a long time), and you can charge your phone.

All these Europeans asking why refugees have phones make me laugh. They ask this while holding their own phones in their hands.

If I were light-skinned

I would take the Sarajevo–Bihać train and no one would tell me which coach to travel in. Because one is for the refugees. The last one.

In Sarajevo, you buy tickets at the station. Tickets all the way to Bihać, which is where we all want to get to. But in Otoka, two hours before Bihać, the police rush onto the train and throw everybody off. Everybody from the last coach that is, regardless of nationality or age. They tell us to get on a bus, and after driving for several minutes they throw us off the bus in the middle of nowhere.

I also think that if I looked different people in the street would be less afraid of me. Sometimes they cross the road when they see me, they rarely look me in the eye. What’s there to be afraid of? I wish I were able to talk to people. Then I wouldn’t miss home as much. I would get to know them and they would get to know me. But who’d want to talk to someone who smells like a refugee?

Do you know there is a phrase: to smell like a refugee? It’s a mixture of dirty, damp clothes, sweat and smoke from burning plastic. In the summer, people were annoyed that we washed our clothes in the river. Yes, there is a place with washing machines in Bihać, but refugees are not allowed there, even if they wanted to pay double for washing and drying. Anyway, refugees are not allowed in most places in Bihać. “Don’t you even touch this door handle”, I’ve heard that so many times.

If I came from a rich family

Maybe I would still have money? The factory we sleep at is only a few hundred meters away from a luxury hotel. But there are many cheaper hotels and motels in the area. But how many times can you pay dozens of euros per night?

I am a PhD student, my family had more books than money. I learned how to make a fire on the road. See how fast I can do it.

But if I had more money, I wouldn’t even try to cross the mountains. I would choose a truck. To attempt that now – no guarantees of course – costs 2,000 euros. You can hide in a number of places under the chassis. Apparently at this border, no one ever died doing this.

If I were an old man

I would probably stay at home. In Aleppo, in Kabul, in the Gaza Strip, in a displaced persons camp in Iraq or in Ghana, because I would not be able to cross the Sahara anyway. Did you know that three times more people die in the Sahara desert than in the Mediterranean?

But you know what? I had no choice. And stop saying that I’m strong. I wish that I could be weak, even for a moment.

This article was written by Anna Alboth, our Media Officer, after one of the ‘Media, Minorities, Migration‘ programme field trips with journalists. It was originally published in Polish in ‘Gazeta Wyborcza‘.