Statement: Protected areas in the Democratic Republic of Congo – a broken system 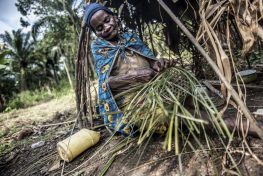 Peoples and ecosystems in the Democratic Republic of Congo are being failed by the way conservation is practised. Indigenous Peoples and local communities face frequent threats of intimidation, torture, beatings, sexual violence and death at the hands of ecoguards and militias. In parts of eastern Congo, protected area ecoguards face the same at the hands of armed groups. Meanwhile, wildlife and habitats are not being protected, species loss is occurring at an unprecedented rate, and communities who were displaced when their lands were declared protected areas continue to be landless and live in abject poverty, decades later. It is well past time for the adoption of a new model in which the Indigenous Peoples and local communities whose traditional lands are home to Congo’s extraordinary biodiversity once again play a central role in nurturing it.

In recent weeks, a number of events have taken place that illustrate how broken the current system is:

These four cases are just the most recent examples of grievous human rights abuses connected with protected areas in the DRC, but many more have been well documented2. If the current coercive model of conservation does not radically change, these tragedies will only increase in the future. The current approach to protecting ecosystems and habitats in the DRC is focused heavily on the creation and armed patrolling of strictly protected areas. The land now occupied by those protected areas was all once sustainably occupied, managed, cared for and used, principally by Indigenous Peoples and other local communities. The ‘fortress conservation’ model relies on the colonial ideology that humans are incompatible with nature. Protected areas are established, supposedly to allow Western scientists and tourists to access “pristine landscapes”. Meanwhile, Indigenous Peoples and local communities are violently excluded from these same places. This willfully ignores the growing body of evidence demonstrating that indigenous-owned, governed and managed lands perform better than State-controlled protected areas in fostering biodiversity, reducing deforestation and sequestering carbon3.

The system is thus based on expropriation, impoverishment and punitive policing. It is also worth noting that the different “conservation partners”, be they governments or conservation organisations, have consolidated this dysfunctional model by funding it without question and by continuing to support the same activities again and again, even when they are made aware of human rights abuses and the utter inadequacy of this model for securing ecosystems4.

Contributing to the problem is the fact that the staff employed in protected areas are poorly vetted, trained, led and compensated5. They are then issued with guns and receive messages from their management that Indigenous Peoples are a threat6. The militarisation of protected area management and the increasing pressure put on ecoguards to demonstrate progress in combating poaching and illegal resource extraction places both ecoguards and community members at risk of violence7.

At the same time, the habitats and wildlife within these protected areas continue to be under threat, both from activities within the parks such as mining, cattle rearing and charcoal production, usually financed by influential and powerful individuals, and from a shrinking land base outside the park due to lack of recognition of land rights and the allocation of customary lands to companies and individuals for timber exploitation, mining or agriculture.

While the human rights impacts of fortress conservation are severe in many parts of the world, the situation in DRC is particularly dire. At the same time, the recent convictions of ecoguards and unprecedented penalties afforded to the victims suggest that a real step change is underway. Conservation actors (national conservation authorities, donors and conservation NGOs) should urgently seize this momentum to implement deep and meaningful reforms. Constructive steps that would lead to better protection of DRC’s ecosystems and peoples include:

These recommendations are not new: they have been made time and time again to donors, conservation organisations and the Congolese government and its conservation institutions and they have not been acted upon. The recent events highlighted in this statement demonstrate an escalation of violence and human rights abuses across protected areas in DRC that is unacceptable and will only get worse if changes are not made. The onus is now on all these conservation actors to make it clear how and when they are going to take the crisis in conservation seriously and take appropriate steps to address the situation.

1 While motivations for this violent attack and the many others carried out against Virunga’s park rangers are multifold and mired in complex conflict dynamics, local civil society and independent experts are increasingly warning that they are compounded by the current conservation focus on military-style conservation enforcement, which is feeding an entrenched cycle of violence. Click here for more information.
2 See here, here and here (section 4.1); TAZ, “Wann bilden Einzelfälle ein System?” (in German), here.
3 See here.
4 See here.
5 In December 2020, for example, ecoguards in PNKB protested against their management because they had not been paid for 9 months.
6 See here.
7 See here.
8 The current lack of support to victims of human rights abuses in seeking redress in local courts stands in stark contrast with the amount of funding allocated to armed conservation enforcement and support for prosecution of wildlife crimes.