‘Over 200,000 children were murdered in Auschwitz. Completely innocent, good, curious about life, loving their closest ones, trusting children. The adult world – after all, so often unjust and cruel – has never demonstrated so much of its heartlessness, its evil. This cannot be justified by any ideology, reckoning or politics. This year we want to dedicate the anniversary of liberation to the youngest victims of the camp,’ says Piotr Cywiński, the Director of the Auschwitz-Birkenau Memorial and Museum.

Today, 27 January 2021, is the International Holocaust Remembrance Day and the 76th Anniversary of the liberation of the concentration and extermination camp at Auschwitz.

It is estimated that at least 232,000 children and young people were deported to Auschwitz, of whom 216,000 were Jews, 11,000 Roma, about 3,000 Poles, more than 1,000 Belarusians, and several hundred Russians, Ukrainians and others. A total of about 23,000 children and young people were registered in the camp. Slightly more than 700 were liberated on the territory of Auschwitz in January 1945.

During last year’s ceremony at the camp, Marian Turski, one of the remaining Holocaust survivors said:

‘Auschwitz did not fall from the sky. It began with small forms of persecution of Jews. It happened, it means it can happen anywhere. That is why human rights and democratic constitutions must be defended.

And that is what I want to say to my daughter, to my grandchildren. To the peers of my daughter and my grandchildren, wherever they may be living: in Poland, in Israel, in America, Western Europe. It is very important. (…) Don’t be complacent, whenever any kind of minority is discriminated against. The essence of democracy lies in the rule of the majority. But democracy itself lies in the fact that the rights of minorities must be protected. Don’t be complacent, whenever any government violates already existing, common social contracts. Remain faithful to the Eleventh Commandment: Never be a bystander.

Because, if you become complacent, before you know it, some kind of Auschwitz will suddenly appear from nowhere, and befall you and your descendants.’

The Auschwitz-Birkenau Memorial and Museum in Poland is a living memorial to the lives of the 1.1 million people murdered at Auschwitz — most for their religion. In September 2020, Piotr Cywiński read about Omar Farouq, a 13-year-old boy from Nigeria, who has been sentenced by a Sharia court to ten years in prison after reportedly using blasphemous language about Allah in an argument with a friend. He felt it as a disgrace for humanity. ‘The boy should not be subjected to the loss of the entirety of his youth, be deprived of opportunities and stigmatized physically, emotionally and educationally for the rest of his life,’ felt Cywiński, who wrote: ‘I cannot remain indifferent’.

He wrote this in an official letter to the President of Nigeria, Muhammadu Buhari, and also made the letter public. President Buhari had himself visited the Auschwitz-Birkenau Memorial in 2018 to pay his respects to the victims of the Holocaust. The Nigerian President’s own experience of Auschwitz would give his letter a particular resonance, Cywiński hoped.

An online campaign quickly gained global attention and support. Social media helped spread the message. If the boy was not pardoned, Cywiński wrote, the Director together with more than 120 other volunteers from around the world would each serve a month in prison to account for the boy’s 120-month sentence. 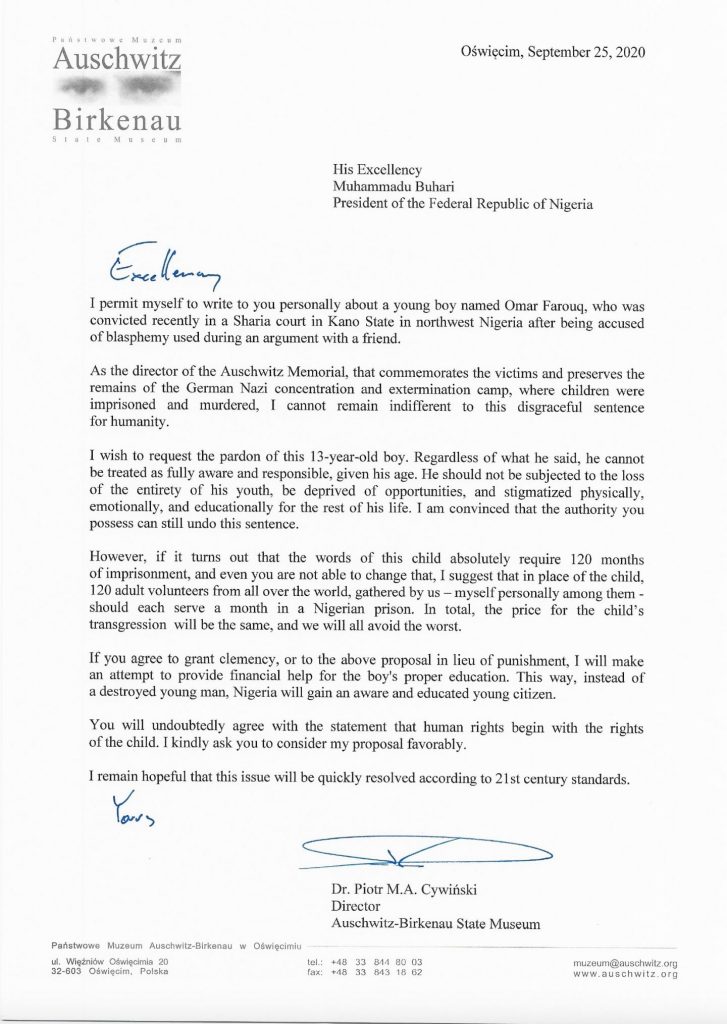 The punishment (as many human rights groups in Kano, Nigeria’s second-largest city, say) goes against the Nigerian Constitution and the African Charter of the Rights and Welfare of a Child. Sunni Islam is the largest religion in about a third of Nigeria’s states, with Sharia courts operating in addition to the country’s constitutional judiciary. The crime of blasphemy, defined as a “public insult” to a person’s religion, can carry a death sentence under Sharia law. Nigeria’s blasphemy laws appear to contradict its Constitution, which entitles its citizens to freedom of thought, conscience and religion, and the right to freedom of expression.

‘We live in the times, when we are asked to like, click, retweet and sign petitions online,’ says Cywiński. ‘This is not enough. I wanted to do something more’. The fact that he oversees the Memorial at Auschwitz, where countless children were imprisoned and murdered by the German Nazi regime, was an additional motivation.

Just a few days ago, good news came from Nigeria. Acting on behalf of the Lagos-based Foundation for Religious Freedom (FRF), Omar’s lawyer Kola Alapinni had filed an appeal with the Kano State High Court. This proved to be successful; the earlier conviction was overturned as Omar had not had any legal representation. As a result, Alapinni was happy to announce: Omar is free and will not be punished. The Auschwitz-Birkenau Memorial’s Director promises not to leave the story at that and gather funds for his education.

It’s a great victory for all the people of Nigeria. We wish to thank everyone who got engaged to free the child. As promised, we will soon begin fundraising for Omar’s education. We are all part of one humanity. https://t.co/ufyjLYgaZ0

Of course, not many children will be as lucky as Omar to have international support. But perhaps celebrating the International Holocaust Remembrance Day with coherence and dignity may mean to commit ourselves not to be complacent, to do ‘something more’ and to do everything we can, starting TODAY, so that there will be no need in the future for another ‘day’, to remember another tragedy?

We warmly encourage you to take a virtual tour of the Memorial and Museum at Auschwitz-Birkenau, to pay tribute to those who lost their lives there.