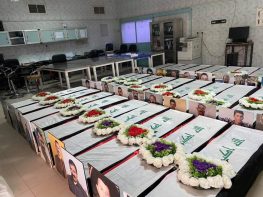 Today, Yezidis will finally be able to give their loved ones a proper burial in Kocho, a small village in Sinjar, Iraq, after its inhabitants were subjected to a genocidal campaign by ISIS in 2014. One hundred and four Yezidis, including two brothers of Yezidi Nobel Peace Prize Laureate Nadia Murad, will be laid to rest in their village.

This burial is occurring in tandem with the attempted passing of the Yezidi Women Survivors Law inside Iraq’s federal parliament. Crucially, not only does the bill being put forward seek to classify the crimes against Yezidis as genocide in an Iraqi legal context, but it also includes language which supports the right of Yezidis to tangible reparations.

A partnership of Iraqi civil society NGOs, The Coalition for Just Reparations (C4JR), are pushing for this bill to be passed by leading an advocacy campaign which Minority Rights Group International fully supports. There has been little done to address the needs of survivors as well as honour the victims, as both the Iraqi Federal Government and the Kurdistan Regional Government have either bartered for influence in Sinjar or set other priorities for themselves.

By passing this legislation, a framework for a meaningful recovery will be introduced for the first time to address the urgent needs of survivors.

As part of the bill, there is a call for the establishment of a new Directorate for Survivor Affairs overseeing a three-pronged recovery strategy: compensation, restitution and rehabilitation. Another major feature of this bill is that it recognises and addresses Conflict-Related Sexual Violence (CRSV) and the terrible way it had been used against Yezidi women, with 19 June being proposed as a ‘National Day to Eliminate Sexual Violence in Conflict’. The purpose of this Directorate is to address issues of land theft and reclamation, monetary compensation, and create dedicated programmes to improve the mental and physical welfare of Yezidi survivors both within Iraq and those now in diaspora.

Yezidi survivors, destitute, left with almost nothing and living in camps across Iraq for internally displaced persons (IDP), tragically continue to take their own lives in great numbers after being left with no hope of returning to any kind of normal life.

Suspected ISIS members who have been identified and apprehended by Iraqi authorities are tried under the Terrorism Act, and not specifically for their genocidal actions against the Yezidi community since no legal framework exists in the country to prosecute suspects for crimes against humanity, war crimes or genocide. This means that suspected ISIS members are tried for their membership of the group rather than the crimes they have committed, rendering Yezidis invisible in the own genocide, much less the pursuit of justice for it.

The proposed legislation seeks to address this through the Iraqi judiciary. Unfortunately, voting on this legislation has been postponed by lawmakers after Parliament failed to table it on 27 January, even as the bodies of massacred Yezidis pass through the capital on their way home this week.

According to the statement by Nadia’s Initiative on 4 February, ‘it is not enough for ISIS fighters to be tried as terrorists. ISIS deployed a calculated genocide against Yezidis by massacring civilians, conscripting boys, and sexually enslaving women and girls. These are not solely tactics of terror. These atrocities were committed with the intention of eradicating the Yezidi people. If the crimes of genocide and sexual violence go unadjudicated and unpunished, the precedent of impunity will threaten the security and human rights of minority groups everywhere.’

The remains of 104 Yazidis who were killed by ISIS will be returned to the village of Kocho on February 6th for a formal burial ceremony. Read @nadiamuradbasee‘s statement honoring the departed and calling for justice in their name.https://t.co/tB2v5cjuUC pic.twitter.com/Swy6VqWLRm

There are dozens of mass graves that still await exhumation located in fields full of land mines. Without a concerted effort to both demine the area and exhume these graves, there is no possibility of offering other Yezidi families the opportunity of a proper burial for their missing loved ones, deterring safe Yezidi resettlement.

Without Iraqi lawmakers creating a pathway for recognition and accountability for specific crimes against Yezidis and other minorities, the victims are lost in the judicial process along with any hope of justice. The Iraqi Federal Government and the international community must make real commitments to support the Yezidi Women Survivors Law and what it proposes to deliver otherwise Yezidis and other minorities affected by ISIS’ assault will struggle to recover.