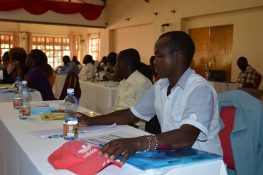 Public budgets are known around the globe to be one of the most important policy instruments for any government. They are tools used by policy makers to allocate public resources.  A statement made by Joe Biden, the newly elected 46th President of the United States, sounds so true today: ‘Don’t tell me what you value, show me your budget and I will tell you what you value.’

To kick off 2021, the Ogiek People’s Development Program (OPDP) and Minority Rights Group (MRG) conducted a training in Naivasha, Kenya, on how to fully participate in national and county planning and budgeting processes, and actively participate in the public discourse on issues affecting ethnic minorities and indigenous peoples in Kenya. The workshop brought together 32 human rights defenders from Awer of Lamu County’s Boni forest, Sengwer of Kabolet and Embobut forests in Bungoma and Elgeyo Marakwet, Ogiek of Mau Forest Complex, Endorois of Baringo and Laikipia and Ogiek of Mt. Elgon.

Article 201 of Kenya’s 2010 Constitution enshrines the right to openness and accountability including public participation in the management of government finances.  This was not the case before the promulgation of the 2010 Constitution.

During the training, participants appreciated the introduction of devolution in Kenya. Article 174 highlights the objectives of devolution such as 174 (e) “To protect and promote the interests and rights of minorities and the marginalised communities,” and 174 (g) “To ensure equitable sharing of national and local resources throughout Kenya.”

The participants were briefed on the functions of the national and county governments. This is important to ensure that minority and indigenous human rights defenders (HRDs) know which issues to engage with which level of government. For instance, security is a national government function and as a result when looking for solutions for insecurity they should engage with national government organs such as Ministries, Departments and Agencies. Participants learnt more about the key timelines in the planning and budgeting processes in Kenya.

Key stages of the planning and budgeting process

There are four main stages in the planning and budgeting process: formulation, approval, implementation and oversight. Ethnic minorities and indigenous peoples, just like any other citizens, have a role to play in all the four stages. At the formulation stage, minority and indigenous communities have a role to make known the projects to be prioritized by the state.  At the approval stage, they can also engage members of the Finance and Appropriation Committee which is tasked to conduct an in-depth review of the budget estimates before debating the contents in the full house of both the national and county assemblies for enactment with or without amendments. At this stage, the minority and indigenous HRDs are likely to face challenges which include access to these public budget forums.

For instance, the National Assembly’s Budget and Appropriation Committee in Kenya usually holds their deliberations in major towns of Kenya. Those minority and indigenous communities located in the remotest parts of Kenya such as the Sengwer in Embobut forest in Bungoma or Kapolet forest in Elgeyo Marakwet, the Ogiek of Mau East or the Awer of Boni forest in Lamu may not be able to travel to the county headquarters to attend such national planning and budgeting forums. Minority and indigenous communities whose ancestral lands have been gazetted as national game reserves have an additional challenge considering that they have become illegal squatters on their own land, and the government has a policy of not investing public money on land which lack security of land tenure. Therefore, whenever they demand to be allocated resources for the construction of health facilities or educational institutions, their proposals are turned down because they occupy gazetted forest lands.

At the implementation stage, citizens are expected to monitor whether the public projects are being implemented in line with the county and national development plans and approved budgets. Finally, at the oversight stage, ethnic minorities and indigenous peoples have the role of reporting any malpractices such as the misuse of public funds or skewed employment against them. This can be reported to the Office of Controller of Budget (OCoB), the Office of the Auditor General or the Office of the Ombudsman among others. As an option of last resort, minority and indigenous communities can sue the state through public interest litigation to defend their rights as enshrined in international law and the Constitution of Kenya 2010.

Article 204 of the Constitution of Kenya establishes the Equalisation Fund, where 0.5 percent of the most recently approved audited accounts is deposited. These resources are used for basic services such as water, roads, health facilities and electricity for marginalized areas of Kenya. The objective is to raise the quality of services in those areas to the level generally enjoyed by the rest of the nation. The fund became operational in the financial year 2011/2012 and its duration is set at 20 years but this can be extended by parliament.

The Commission on Revenue Allocation (CRA) has a role to play in terms of providing recommendations to parliament before any bill appropriating money out of the equalisation fund is passed. So far, the Commission has produced two policies where they set out the criteria by which to identify the marginalised areas of Kenya. In the first policy they identified marginalised counties while in the second policy, they identified marginalised sub-locations building on lessons learnt from the first policy. The third policy is being formulated and this will provide a chance for ethnic minorities and indigenous peoples to have a say on which new criteria for identifying marginalised peoples should be based.

The beauty of a public fund is that any resources set aside always accumulates from year to year if they remain unspent at the end of a financial year. According to CRA, a total of Ksh. 43.8 billon has been allocated to the Equalisation Fund and not a single shilling has ever been spent because of the greediness of the Kenyan legislators. These are resources which could possibly build and equip health facilities, provide clean piped water and install electricity to benefit marginalised communities including ethnic minorities and indigenous peoples in Kenya.

The Second CRA policy which expires on 30 June 2021 has identified Elgeyo Marakwet (Ksh. 149 million), Bungoma home of the Sengwer (Ksh. 134.9 million), Lamu the home of the Awer (Ksh. 132.2 million and Nakuru (Ksh. 14.7 million) as some of the marginalised sub-locations which should be benefiting so far.

The minority and indigenous HRDs had an opportunity during the training to develop their own budget proposals based on what they think should be prioritised by the national government. These proposals were presented under the auspices of Hunters and Gatherers Forum (HUGAFO-Kenya) during the Institute of Economic Affairs’ (Kenya) pre-budget hearings. One of the many proposals they made was calling upon the National Treasury of Kenya to allocate resources in the financial year 2021/2022 for the full implementation of the judgements delivered on both the Ogiek and Endorois cases.

This project is funded by the European Union Delegation to Kenya. This content is the sole responsibility of Minority Rights Group International and can under no circumstances be regarded as reflecting the position of the European Union.