Himalayan Dam Disaster: A Symptom of What? 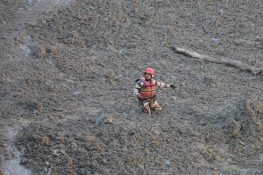 On 7 February 2021, a glacier of the Himalayan peak Nanda Devi in northern India, burst and killed at least 32 people, with a further 170 people left trapped in a tunnel. The glacier caused a torrent of water to descend on the Rishiganga hydroelectric project, sweeping it away, as well as destroying many homes on the river bank of the Rishiganga river and the Dhauliganga river. The Dhauliganga Dam was also heavily damaged by the flood. This has come after a longstanding commitment by the Indian government to build up the infrastructure of the country, which, unfortunately, has brought with it disastrous ecological costs.

Whilst the glacial landslide is inextricably linked to climate change, the truth behind it is far more rooted in the politics of the region. Rachel Carr, a glaciologist at Newcastle University explained, ‘There is a growing debate in India over the construction of …smaller hydropower plants. The plant in the way of this disaster was a less than 15mW power station, which raises the question: should we be compromising the integrity of the Himalayas for such a small project?’

This debate has been decades in the making, due to the well-known structural fragility of the Himalayas as a mountain system. Just a few years ago in 2013, another glacial burst killed approximately 3000 people; according to the Hindustan Times, ‘rarely, anywhere in the world, have two big disasters in a region taken place in less than a decade’.  Kundan Singh, a resident of Uttarkhand had submitted a petition in 2019 claiming that the construction of power stations in the region were applying environmentally unsafe methods such as the use of explosives and the dumping of waste into rivers. In addition to the construction of these ecologically harmful projects, an 800 kilometre highway is being built to connect four holy Hindu sites. The ecological effect of this highway, alongside its contribution to India’s growing Hinduization and its social impact on minority communities in the country, remains to be seen.

On 31 July 2018, the North Eastern Electric Power Corporation Ltd (NEEPCO) released water from Nagaland’s Doyang Hydroelectric Project on the river Doyang, inundating 10,000 hectares and affecting 100,000 people living in Nagaland and Assam. The level of the water and force of the current had made it impossible to contain any further. NEEPCO’s executive director of operations and maintenance, Bharat Chandra Deka stated, ‘The landslide dam burst open. Add to that extremely heavy rainfall across 2,500 square kilometres which extends to Myanmar, the water just gushed in and we were forced to open the gates on July 27.’ Nevertheless, villagers in Ruchan village, Herheri village, Golaghat district and Wokha district claimed that no warning was issued for the release of the water. One villager said at the time, ‘This was not a flash flood. It was a misfortune brought upon us by a hydroelectric project in Nagaland.’

Indeed, Prime Minister Narendra Modi’s government has been accused by several environmental groups of not doing enough to safeguard India’s ecological resources. In August 28 2018, the government signed a Memorandum of Understanding with six states to go ahead with a dam project in Uttarakhand, which was under review by the National Green Tribunal over environmental concerns and had not yet been approved. This Lakhwar-Vyasi hydroelectric project is expected to be as high as 204 meters with a 40-kilometre reservoir on the Yamuna river. The government aims to complete this by 2023 with the water resources minister Nitin Gadkari saying, ‘Delhi will not face a water problem for the next 20-25 years once the project is completed’, as the water from the project will serve to supply the city.

The same issues can be seen in the Southern State of Tamil Nadu where the Sillhalla hydroelectric project has also raised ecological concerns. The company in charge of the project, Tamil Nadu Generation and Distribution Corporation Ltd (TANGEDCO), have already estimated that construction of the reservoir will submerge more than 315 hectares of forest and land, destroying the area completely.

Nilgiris, where the Sillhalla project is planned, already houses ten dams which have all had a severe ecological impact. The area, which encompasses the Silent Valley National Park, the Mukurthi National Park and the Nilgiri forest division, is known for its uniquely rich biodiversity and as an eco-sensitive zone. Environmentalist K. Homan Raj has stated, ‘The area has already reached its ecological carrying capacity. Execution of the Sillahalla hydroelectric project will adversely affect the integrity of the fragile mountains with adverse consequences, both ecological and social.’ This could result in more landslides, potentially devastating over thousands of homes.

Not only are these infrastructural projects negatively impacting the flora and fauna of India, they are also affecting hundreds of thousands of people through displacement, injury and death. Madhumitha Jaganmohan, a researcher in Energy, Environment, Chemicals & Resources published statistics showing that over 2700 people in India died due to landslides alone between 2010 and 2018. During the landslide of 2018 in Herheri village, 120 families had to seek shelter in a school, only to be forced out two days later as a second wave of water flooded the building. The Sillhalla project, which plans on submerging nearly 800 acres of greenery, is projected to cause over 10,000 people to lose their jobs, as many work in agriculture. A farmers’ leader in the Kundah region, V. Durai, has said, ‘Officials have already told us that the dam will submerge all of our agricultural fields along with surrounding dense forests. We have been cultivating potatoes, garlic and carrots here for generations along with tea and we have no other place to go.’

What is clear from this disastrous environmental picture is that climate change can no longer be the easy one-line explanation for confusing weather changes. Instead, governments need to wake up to the reality that they are the problem but also that they are the solution. Countries such as India, which still benefit from a large number of green spaces, need to start developing their infrastructure along ecologically sound principles.

Not only that, they need to do so keeping the needs of all communities in mind. The humanitarian response to these disasters must immediately answer to all those affected, which includes minority and indigenous communities – the people who have contributed the least to the problem and are now facing the worst of its effects.

This has to be done in order to secure a better future for the next generation, which is poised to experience environmental ruin otherwise.