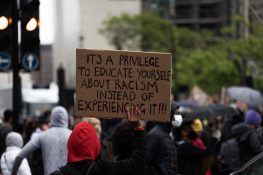 Minority Rights Group International unequivocally condemns the report released by the Commission on Race and Ethnic Disparities set up to investigate claims of structural racism within British society as inadequate, insensitive and misleading. The manner in which the Commission was appointed and the narrowness of its consultative process have already been widely criticized. Where the report does specific damage is in the triumphalist tone of its findings, captured, in the words of its Chair, ‘[P]ut simply we no longer see a Britain where the system is deliberately rigged against ethnic minorities’. Put equally simply, that statement fails to take the good hard look at a contemporary society whose wealth has been built on colonial adventures with legacies that continue to shape Britain’s social stratification and the experience of minorities. Its historical amnesia defeats the narrative that this society may offer anything approaching the ‘beacon to the rest of the world and Europe’ its authors seem to believe it is.

The Commission was meant to ‘respond’ to the urgent call for action made via the #BlackLivesMatter movement. It called for a contrite tone, a thorough investigation and moves towards a deep reconciliation to make sure that the sum of Britain’s population would equate to a united cohesive whole. This required taking stock of past actions and current policies that have fostered and perpetuate the marginalization of ethnic minorities in the UK.

The report lacks methodological rigor and is premised on a dismissal of the very systemic concerns it was mandated to assess. The Lammy report recommendations had already highlighted some of the measures required in the specific context of the criminal justice system. In accepting that report, David Lidington, then Lord Chancellor & Secretary of State for Justice stated ‘The Government accepts it will be judged on its actions, as well as its words’. Instead of striving to implement those carefully constructed recommendations and seeking to widen them, the new commission has effectively suggested that the realities of 2017 are vastly altered.

This magical alteration appears to have occurred despite a period of austerity that hit all vulnerable populations in the UK including ethnic minorities hard, followed by a mismanaged pandemic response with an eye-watering death toll, disproportionately experienced by ethnic minorities. While research points to growing racism in society, MRG deplores the Commission’s attempts to discredit and vilify ‘the progressive and anti-racism movements’ that have been defending the rights of minorities in the midst of this global health and economic crisis.

Rather than any statement about the state of systemic racism and structural discrimination in the UK, the report in fact demonstrates that the government has neither the will and intention, nor the imagination in working to build a better Britain. Instead it believes that pithy statements by handpicked commissioners with licence to ‘interpret’ realities to fit their pre-existing views is an adequate response.