George Floyd: one year on, MRG stands with all minority victims of police violence and their families 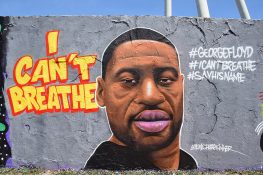 Today marks one year since George Floyd was murdered by police officer Derek Chauvin in Minneapolis, MN. Minority Rights Group International (MRG) offers its enduring support to his family, friends and community over this tragedy.

George Floyd will not only be remembered in the minds of those who watched the horrifying 8 minutes and 46 seconds video of his murder, but also through the powerful civil society protests and movements that were sparked because of it. An entire generation has been emboldened to carry on the fight to achieve racial justice and to end institutional discrimination and police brutality. Today, MRG stands with all the family members of victims of police killings.

While the spotlight on police violence in the United States has intensified over the past year, the list of African Americans and Latinos, including Afro-Latinos being subject to incommensurate levels of brutality at the hands of American police officers has continued to grow. From Kentucky to California, and Missouri to Virginia, we have seen murders of ethnic minorities committed by police officers across the country. The violence is endemic, which is why MRG has called on the UN to investigate systemic racism in the United States’ police forces. Proper investigations of law enforcement departments by independent bodies will go a long way towards ensuring that African Americans and other minorities in the country are no longer three times more likely than white people to be shot by police.

Likewise, we join the many Black disabled, Deaf and neurodiverse rights activists in calling for wider recognition that as many as half of those killed by police in the US have disabilities or mental health conditions. Understanding of how racism and ableism intersect in policing remains woefully under addressed, yet research shows that half of all Black disabled people in the US will have been arrested by the time they reach age 28. This vicious circle between repeated traumatisation, mental health issues and more police violence must be stopped. During the police encounter that led to his murder, George Floyd revealed that he had been shot previously in an attempt to stop one of the officers from drawing his weapon. More needs to be done to ensure that law enforcement is properly trained to understand disability, neurodiversity and mental health and that alternative systems are in place to avoid unnecessary police encounters, such as sending trained mental health workers instead of police for non-criminal emergencies.

Not only has the murder of George Floyd shed light on the conditions that African Americans face by state violence, but it has also opened a global conversation on anti-Black racism and police brutality. Mass mobilisations and protests erupted on every continent of the globe, with communities expressing solidarity with the US and drawing on their own experiences of systemic racism and violence. MRG has also called on the UN to monitor excessive use of force and other human rights violations by law enforcement officers against Africans and people of African descent globally.

‘Vidas Negras Importam’ is the slogan protesters in Brazil chanted one week before the murder of George Floyd, to express outcry over the fatal shooting of 14-year-old Joao Pedro Matos Pinto. An entire year later, on 6 May 2021, a police raid in Rio de Janeiro’s Jacarezinho favela left 28 dead. Black lives have been under attack for many centuries, in many different countries, and the taking of these lives have been justified in different ways by the powers determined to uphold systems of oppression for their own benefit. Tunisia is the only country in the Middle East and North Africa (MENA) region to have introduced legislation against all forms of racial discrimination. It is also the only MENA country to have held solidarity protests organised by its Black population. Yet, both black Tunisians and Sub-Saharan African migrants still find themselves frequently under attack by authorities.

Today, we remember and mourn the loss of George Floyd, and the countless other African American victims of state violence in the United States. We stand with them, their loved ones, as well as people of African descent globally in their urgent calls for dismantling structural racism and oppression at the hands of the institutions responsible for their protection.

Photo: Mural showing the portrait of George Floyd in Mauerpark in Berlin. To the left of the portrait the lettering ‘I can’t Breathe’ was added, on the right side the three hashtags #GeorgeFloyd, #ICantBreathe and #SayHisName. The mural was completed by Eme Street Art (Facebook name) / Eme Free Thinker (signature) on 29 May 2020. Credit: Singlespeedfahrer, CC0, via Wikimedia Commons.