How the Ugandan Constitution perpetuates discrimination against ethnic minorities 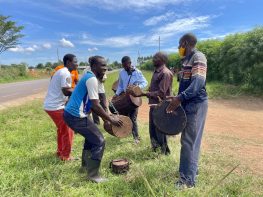 In 2011, Aggrey Kiragaba Liboyo, a pastor, was awarded a dream scholarship in the United States to further his studies in theology and church leadership. As a member of the Maragoli community—a minority ethnic group in Uganda, the news of the scholarship was massive, as such opportunities are a rarity for members of the community.

When Aggrey tried to apply for a passport at Uganda’s Department of Citizenship and Immigration Control, he was turned away on the ground that the Maragoli, as a community, is not legally recognised in Uganda.

In 2019, he received yet another invitation to the United States—this time, to attend a workshop in Pittsburgh, Pennsylvania. Again, he was denied a passport so he could not travel.

The plight of Aggrey and the Maragoli community can be traced back to the drafting of the 1995 Constitution. Under the third schedule, the Constitution provides for the right of Ugandan citizenship by birth to members of ‘indigenous communities’ that were already within the boundaries of Uganda by 1926. Initially, this list comprised 56 communities, but with the 2005 amendments, this number has increased to 65.

This list, however, is not representative of all the communities in Uganda. Groups such as the Maragoli, Ugandan Somali and Asian communities, for example, do not feature on this list.

By some accounts, the Maragoli community arrived in Uganda in the 19th century, while some claim they arrived in the country from present day Kenya in the early 1900s as construction workers of the East African Railway. Going by these accounts, then, they qualify for Ugandan citizenship by birth, right?

However, a different account claims the community arrived in the country in the 1950s at the invitation of the Bunyoro Kingdom, whose king allocated the Maragoli land to settle within the boundaries of his kingdom. To date, the community is settled in Kiryandongo district in the kingdom.

Probably, the Maragoli were omitted from the third schedule based on this account. If this is the case, why then does the Constitution recognise Banyarwanda as an ‘indigenous community’, yet this group arrived in Uganda in the 1960s?

Why is 1926 such a big deal anyway? Is a 70-year-old Munyoro (from the larger Banyoro community living side by side with the Maragoli) more Ugandan than his Maragoli neighbour, who was born in Uganda in 1925 and lived in the country all his life?

While Aggrey cannot travel outside Uganda, some members of his community cannot access basic social services because of their omission from the Constitution. They cannot get national identity cards for example. Without a national identity card, they cannot get important vaccinations such as the COVID-19 vaccines. They cannot enrol their child in public school, and thereby greatly limiting future opportunities for young Maragoli children. While the Maragoli are allowed to participate in activities that suit political interests—such as voting, some political actors are trying to exploit their vulnerability vis-à-vis the Constitution, to grab their land.

For the better part of the last ten years, the Maragoli have been engaging the highest echelons of political power in Uganda—including the Office of the President and Parliament—to bring about an amendment to the Constitution and gain official recognition. Recently, in the last week of the 10th Parliament, a select group of parliamentarians visited the community as part of consultations before a wider constitutional review process gets underway. Hopefully, the suffering of Aggrey and the other members of the Maragoli community will end sooner rather than later.

Photo: A group of men from the Maragoli community playing their traditional music instruments in Kigumba, Kiryandongo district ahead of consultations with members of the Ugandan parliament, May 2021. Credit: Billy Rwothungeyo / MRG.