Weekend thoughts on the plight of the left behind 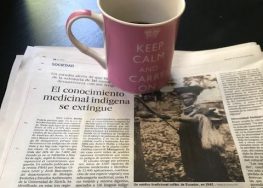 One of my little pleasures every weekend is to be the first to grab the newspaper and read it while everyone else is still asleep.

This weekend in particular, I realised how work can shape the way you read the paper: since I started working at Minority Rights Group International, I have been systematically reading the papers looking for articles on minority and indigenous communities. I am never disappointed; almost every single weekend, there is at least one or more articles about communities like the Roma in Hungary, the Yezidis in Iraq or the Mapuche in Argentina.

Last weekend’s El País did not fail me in that sense: from indigenous communities exploited in the mines in Peru mentioned as the presidential election was being covered to refugees reaching the Spanish shores as they escape poverty and discrimination in West Africa, I read several articles mentioning (often too briefly) communities I work for and with on a daily basis.

Furthermore, even when minority and indigenous communities are not expressly mentioned, I am often reminded of them. The extensive coverage of the G7 summit and its numerous references to inequality, discrimination and climate change is a perfect example of this: across the world, communities we work with are systematically suffering from exclusion and poverty. They are on the frontlines of the effects of climate change. They are too often persecuted for their faith or ethnicity and the main targets of hate speech in many countries.

Still, one of the articles published (on Saturday) did especially grab my attention: ‘El conocimiento medicinal indígena se extingue’ (‘Medical indigenous knowledge is getting wiped out’) was the title. The piece explained that the knowledge of medicinal properties of many plants and flowers is at risk of disappearing as these are only known by indigenous communities who are themselves on the verge of extinction in many regions of the world. When the languages spoken by these communities disappear (an estimated 30 per cent of the 7,400 indigenous languages worldwide will not be spoken anymore by the end of the century, according to UNESCO), their ability to share their precious knowledge disappear. This is particularly tragic especially when one thinks that indigenous knowledge has played a big part in the development and use of medicines now prescribed daily against diseases like Hodgkin lymphoma or breast cancer.

This slow disappearance combined with the fact that climate change is also negatively impacting on biodiversity draws a grim snapshot of how, in the coming years, we will lose crucial opportunities of new and possible ground-breaking medical discoveries whose impact could have been tremendous for humanity.

But then, I saw the writing on my coffee mug: ‘Keep calm and carry on’. I don’t think we should keep calm at all. But carrying on…  that I am sure of: I know that MRG will. We will all carry on our work to ensure that the human rights of minority and indigenous communities worldwide are respected and protected. Will you help us?