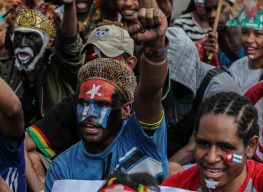 An ongoing armed conflict in West Papua between the Indonesian military and the separatist movement finds ordinary indigenous peoples caught in the middle, resulting in deaths and violations of their rights.

Since 1963, when the Indonesian government formally took administrative control of West Papua1, the Indonesian National Armed Forces (TNI) have carried out security operations criticised for their violence and intimidation of Indigenous Peoples2 in West Papua. The TNI have stepped up their military operations3 in West Papua with the aim of ending the separatist movement4 (including but not limited to OPM). Recently, the Indonesian government created a new category called “KKB” (Armed Criminal Group). The group includes people or groups carrying out any confrontational activity in West Papua, but without clearly identifying who this group actually is. Therefore, anyone and any group can be labelled as terrorists. On April 29th 2021 the Indonesia state officially declared any criminal, armed group (KKB) a terrorist group.5 This declaration was announced following the murder of the Indonesian regional intelligence chief6, General I Gusti Putu Danny Karya Nugraha.

In response, Indonesia’s President Joko Widodo ordered the police and military “to chase and arrest”7 everyone involved in the ”KKB”, and 400 members of the elite Infantry Battalion 3158 were deployed to the easternmost region of West Papua. Over the past three years, the Indonesian state has sent 21,369 troops to the land of Papua9. On the 24th of April 2021, the chairman of the People’s Consultative Assembly (MPR), Bambang Soesatyo, added to these orders against the “KKB” in his statement to “destroy them first. We will discuss human rights matters later.”10 This statement contradicts the role Indonesia has assumed in advocating for human rights and democracy at a regional level. Among other initiatives11, Indonesia has been actively involved in the establishment and development of the ASEAN Intergovernmental Commission on Human Rights (AICHR)12 and was recently elected to represent the Asia-Pacific region in the United Nations Human Rights Council (UNHRC) from 2020-202213.

Indigenous Peoples have had to flee from their homes as the Indonesian military and police have entered their villages, primarily in the highland region of Nduga and Intan Jaya. This pattern of displacement is not new14. In the Nduga massacre of 201815, the Indonesian government declared a state of emergency in the Nduga regency, which was used as justification for the TNI to launch the Nemangkawi Military Operation16 that further escalated the ongoing armed conflict, which led to the displacement of approximately 5000 villagers, including 700 children17, into refugee camps. Between 2018 and 2020 an estimated 400 refugees have diedin these camps in Nduga.18

The displacement of Indigenous Peoples continues with the Indonesian military’s more recent efforts to stop the “KKB”. Villagers have been driven out of their territories19 as military and police occupy their schools and buildings for their operations20 to search for the “KKB”, putting Indigenous villagers at risk for their lives and removing them from their livelihood. Thus, robbing them not only of their safety and freedom, but also their right to food, housing and education.

Police and military are entering secluded Indigenous villages to search for members of the “KKB”, many of whom they claim hide and live amongst other villagers. If and when they cannot find “KKB” members, the military and police are shooting innocent civilians21. Although men are the main targets, women and children are also being shot at22, and even babies have lost their lives as a result23 of the conflict. They are also destroying property and shooting farm animals such as pigs that villagers need for their livelihood.

While some of these deaths are being reported in media, including youth, disabled civilians and pastors24, many are silenced/go unreported. Since the beginning of May, the Internet has been cut off in West Papua’s capital25 Manokwari preventing local journalists from reporting on the ongoing human rights violations. Although the internet provider has spoken out and apologized for the ongoing disruptions, the government has previously shut down internet services in West Papua during weeks of protests and deadly unrest in 201926.

The Indigenous Meepago People of Intan Jaya and the Indigenous Lapago People of Nduga report that they fear for their lives in their own land. A women’s community leader from a town near Puncak, described that “Thousands are displaced in Puncak, five villages fled into the jungle. Health clinics and schools have been taken over by the military. Soldiers are everywhere. We are living in a war zone.”27

On May 10th, Victor Yeimo who is the international spokesman of the West Papua National Committee, was arrested in the provincial capital of Jayapura28. Yeimo has been on a police wanted list accused of treason related to his alleged role in the widespread anti-racism protests which were held in August and September 201929. Authorities say he orchestrated some of the most serious civil unrest in decades during these protests30. These protests, which initially started peacefully but ended in riots, were mass protests that included Indigenous Peoples. Yeimo was present at the first peaceful protest but he claims to have been absent at the riot31.

According to Prominent human rights journalist Victor Mambor, he has also been targeted by the Indonesian military, who claim his involvement in the separatist movement. His car was recently vandalised32, an incident that is not unusual for the journalist who, along with his family, has been harassed since 2007. Mambor’s lawyer, Veronica Koman has described the latest car-vandalism as “…another episode of harassment against Papuan journalists. When you report stories not in line with the government’s version you’ll be attacked.”33

Contradictory to the ongoing human rights violations, in 2006, Indonesia ratified34 the United Nations International Covenant on Civil and Political Rights35. Also, in 1998, Law No. 9 on Freedom of Expression in Public was passed36, but no implementing regulations were issued. Instead, according to senior West Papuan lawyer, Yan Christian Warinussey, the police have issued internal guidelines that suppress the freedom of expression37 that has formed the law in West Papua and is used to suppress activism, which can be seen through the state’s continuous harassment of human rights defenders.

The undersigned organisations call for:

Click here to read this statement on the website of IWGIA. The PDF version of the statement is available here.

Photo: Papuan students protesting racism, calling for independence for their territories and an end to an internet shutdown in Papua. Credit: Albert Ivan Damanik.