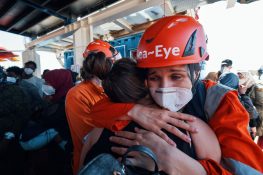 Last month, I joined the Sea-Eye 4 crew as a journalist on board. At that time, we did not yet know that we would experience one of the most incredible rescue operations that Sea-Eye has ever known, bringing aboard more than 400 people from 6 boats in distress. We had not imagined that our main deck would be full of trembling, freezing people who would be thanking us for saving their lives, and that the 150 children we would rescue would cling to us and hug us as though we were the most important people in their lives.

As a journalist, I didn’t know that I would stumble upon the most harrowing of stories, recounted to me by women who had fled detention centers and places of captivity where they had been held as slaves: routinely raped, tortured and beaten up, while their children were left to die.

But I also didn’t expect to experience the incredible power of humanity and friendship, brotherhood, tenderness, and love, in its purest form. Because the days after we had safely rescued all of our guests would be marked by true love – more that just love between two human beings as we traditionally tend to understand it – but rather a love for humanity and the whole of humankind that filled us with joy as we played with the rescued children during the most ordinary scenes of life: distributing food, washing dishes, splashing water, laughing and hugging.

After we rescued the first boat in distress, one of the rescued men ran through the main deck and fell onto the floor.
I ran toward him: I thought he had fainted. I wanted to call a doctor.

But the man lifted his head, then bent down again: he was praying.

Thank you for saving our lives, he was saying in his prayer.

Today, one month later, it is the World Refugee Day. It is painful and ironic that we still have to fight and write manifestos to uphold the most basic human right that people drowning in the Mediterranean had been deprived of: the right to life.

Exactly one month after the rescue, I received a message from a woman we had received on board. It read:

On my journey, I was sold as a slave in Libya. It took me five months to escape. Before the crossing, I had to wait by the seaside. No one believed that we would make it out alive. Everyone was scared to death, as the sea was immense, limitless, and all I could see was waves. We spent two days fasting as we were trying to diminish our body weight. We only had water to drink. Sometimes, I still cannot believe you rescued us. The crossing was like a nightmare. By saving us, it is as though you had saved the entire world. You accomplished a remarkable job that only God almighty can reward you for.

It is hard to believe that messages like these have to be written in Europe today. They feel anachronic – excerpted from another time. In today’s Europe, refugees still have to send messages like these to NGO workers who pull them out of water – because in the absence of NGOs, there is no one to save their lives.

Another story I recall from the ship was a night rescue in the early hours of 17 May.

Out of a broken wooden boat drifting in the Mediterranean in the middle of the night, we pulled a group of pregnant women, babies, and children.

All of them were soaked and shaking. They had spent a terrible night out in the waves, engulfed in a mixture of seawater, gasoline and urine, fearing for their lives.

One of the ladies we brought aboard was 6 months pregnant. I hugged her and held her hand as she was sent to rest. I immediately felt a sense of connection with her.

The following morning, I went to check on her; she looked like she was suffocating and hot.

I offered to help her out onto the main deck and sit next to me so that she could breathe some fresh air.

The main deck was a hive of activity: we had just brought aboard 80 more people from another boat in distress. The pregnant lady and I watched as 80 drenched, anxious, trembling people were being covered in golden rescue blankets, waiting for water and food rations. They had been at sea for two days before we found them – hungry, weak and dehydrated.

Instead, she turned to me and said in broken English: ‘I want to do the work that you do. I want to help people’.

The story that unfolded that day in the Mediterranean is that of a tragedy, followed by love.

The four days we spent aboard with the rescuees were probably the happiest days of my life.

We were washing dishes and splashing water three times a day after each meal, and the children would come to us, help us and play. Nothing distinguished those moments from other ordinary scenes of life, yet they were about to become my most precious memories. Driving 408 rescued people to safety was the best thing that has ever happened to me.

There is one sentence that can translate the simple, ordinary idea that Europe had completely forgotten about: no man, woman or child should be left to die, and no group of people has the right to decide who should live and who may be left to die. We all share the same right to life.

Sara Cincurova is a journalist and an alumna from our ‘Media, Minorities and Migration’ programme.