Minority Rights Group > News > Europe > Czech Republic > Stand Up For Stanislav Tomáš: A Call for Accountability and Structural Change in the Czech Republic

Stand Up For Stanislav Tomáš: A Call for Accountability and Structural Change in the Czech Republic 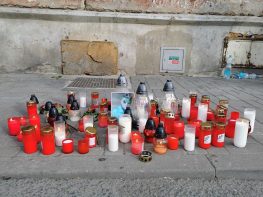 Two men, both in their 40s, brutally murdered by police, in full view of cameras in two different parts of the world, reveal the stunning similarities in the lack of humanity that has become synonymous with the impact of contemporary structural discrimination.

When George Floyd was murdered by Derek Chauvin kneeling on his neck on 25 May 2020 in the streets of Minneapolis, he became another victim in the long list of African Americans that lost their lives when coming up against law enforcement agencies. The outpouring of grief shook the world as the graphic footage was viewed again and again. Its reverberations lit a touch paper for protest, and while many societies have reacted with much symbolism but little concrete action, the issue of structural discrimination was put firmly on the agenda for change.

Yet Stanislav Tomáš, a Roma man, suffered exactly the same fate at the hands of police on the streets of Teplice in Czech Republic on 19 June 2021. The 5 minute 55 second clip makes for excruciating viewing as the prone figure of Stanislav slowly loses his life under pressure from the officer’s knee on his neck. Worse, rather than showing any kind of remorse, the Czech police appear to have tweeted a video shot prior to the killing in an attempt to deflect blame unto their victim.

The world has not reacted in the same way to the killing of Stanislav. This is partly because there has not been a surge of protest to generate global attention. A lot because there is a risk that these kinds of killings may become commonplace due to inherent racism in policing and toxic populist nationalist politics.

Meanwhile, far from the mandatory soul-searching by society as a whole which this incident should lead to, the Roma community has been forced to turn itself to the most important task at hand: directly supporting Stanislav’s sister and mother. Early reports point to intimidation of eye-witnesses, seizing of mobile phones to search for more videos of the incident, and a general perpetration of a climate of fear. While it may seem logical that the police would be under scrutiny after this incident, the reverse may well be true – unimaginable in the bright glare of publicity that the George Floyd murder prompted.

While there have been vigils and protests in and outside Teplice, the incident only seems to have shaken up the Roma community. Unfortunately, they have become accustomed to police brutality, harassment and marginalization over the decades in the Czech Republic and across the wider region, so they already start with low expectations of fairness, never mind any prospect of justice.

As Roma from the region mobilise to honour the life of Stanislav, it is imperative that the global community wakes up to the systematic and widespread oppression of Roma that this tragedy typifies. It is vital to draw on the spirit of the #BlackLivesMatter movement to stand in solidarity firstly with Stanislav’s sister and mother and also with the Roma community to show them the world cares, so that Stanislav’s death can be a watershed in the daily bullying at the hands of law enforcement services. We can start by galvanising around #RomaLivesMatter and #SayHisName. The fundamental message to the police services, local authorities and the government of the Czech Republic has to be loud and clear: a belief in the inherent dignity and worth of every human being makes this behaviour unacceptable. Stanislav’s death must be investigated thoroughly, independently and transparently.

But as with the #BlackLivesMatter movement, it must lead to much more: a deeper introspection as to how structural discrimination scapegoats and marginalizes a community. And a thorough action plan beyond mere promise of rights for all, to assessing how such rights can be designed, framed and implemented to ensure that no Roma has to suffer oppression.

This form of discrimination is entrenched and ossified. Undoing it will require a push for the hearts and minds of honest, hardworking, progressive and fair-minded Czechs. It is crucial that they stand up now in solidarity with the Roma. All political parties seeking election in October must have the goal and a policy to unravel structural discrimination, and actively reach out to the Roma community.

The next great Czech poet, composer, artist, footballer, chef, doctor, nurse, scientist, may create a blaze of national glory. But to compete on the world stage in unearthing that talent, all Czechs including the Roma must have the opportunity to fulfil their human potential. Marginalization impedes societies from benefitting from the full extent of their talent. Discrimination hinders the growth of talent among the marginalized, while stunting those who oppress them, generating fragmentation. Feeding all of this, hate fosters entitlement and superiority. Stanislav Tomáš lost his life at the hands of the police in Teplice as a consequence of this toxic chain of factors.

Making sure we understand how Stanislav’s death happened is crucial. Ensuring that the events are scrutinised in a court of law in a bid to determine accountability must be the next step. But to really prevent others from suffering the same fate this must be merely the first step of a concerted programme. The world is watching.

Show your support for Stanislav Tomáš

Events are being organised across Europe in support of Stanislav Tomáš. Here are a few: