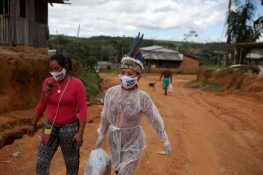 Minority Rights Group International (MRG) releases its annual Minority and Indigenous Trends report today, with this year’s edition providing a comprehensive look at the distinct impacts of COVID-19 on minorities and indigenous peoples. Crucially, the report presents ten urgent lessons for governments, civil society and the international community to ensure a fairer post-pandemic future for the marginalised.

‘Right from the very first days of the pandemic, it was clear that minorities, indigenous peoples and other marginalised communities were significantly more exposed to the threat of COVID-19,’ emphasises Carl Söderbergh, MRG’s Director of Policy and Communications, and one of the editors of the volume. ‘But only after looking closer and analysing cases from every sub-region in the world, can we understand the true scale and gravity of the disease’s many impacts.’

Through its ten lessons drawing on numerous case studies, Minorities and Indigenous Trends 2020: Focus on COVID-19 presents findings across a wide range of areas including universal health coverage, housing and living conditions, environment and land rights, livelihoods, language and education, surveillance and policing, hate speech and misinformation, conflict, migration, and identity and well-being. The huge variety indicates the extent to which COVID-19 has disrupted all areas of life.

‘What is most striking is the full range, depth and complexity of COVID-19 impacts facing minorities and indigenous peoples’, Söderbergh notes on the report. ‘From Argentina’s Jewish community being targeted with increased anti-Semitic attacks to border closures preventing Sámi reindeer herders in Arctic Sweden from reaching their pastures, virtually every marginalised minority and indigenous people around the globe has in some way faced disproportionate harm’.

Some of the first indications were the disproportionately high COVID-related death rates among minority communities. For example, in the United Kingdom, Black people were over four times more likely to die from COVID-19, while persons of Bangladeshi, Pakistani, Chinese and mixed ethnic backgrounds were about 1.8 times as likely to die from the pandemic. Though due to numerous factors, most especially the structural racism these communities face on a daily basis, a chapter in the report describes first-hand the housing inequalities confronting ethnic minorities in London.

Other impacts were the result of the restrictive measures instituted by many governments. In Uganda and Rwanda, indigenous Batwa communities lost a crucial source of income when international travel came to a halt, bringing an abrupt end to the tourists who previously bought their handicrafts. With no other means of support and blocked from their traditional hunter-gatherer lifestyle after displacement from their lands, many have been forced to depend on the goodwill of neighbours and local charities.

Meanwhile, governments have targeted minority and indigenous communities in ways that stigmatise and fuel racist and xenophobic narratives. In Sri Lanka, the government instituted a ban on burials and a cremations-only policy for deceased victims of COVID-19, despite the WHO having mandated both burials and cremation. The ban, which targets Muslim and Christian minorities, has contributed to a spike in hate speech directed at these communities.

With contributions from experts and activists, the report features varied examples from every region:

This report also presents numerous examples of minority and indigenous communities organising to protect their own members as well as their neighbours, especially those who are most vulnerable to the impact of the pandemic.

‘It is critical that we learn the painful lessons and work together so that we are better prepared for future crises,’ says Söderbergh. ‘If not, the severe inequities and discrimination faced by minorities and indigenous peoples throughout the pandemic are likely to remain and, in some cases, worsen.’

Alongside its ten lessons, the report presents several key recommendations for governments and civil society, that include addressing structural racism in perpetuating health inequalities as well as refocusing data collection efforts to ensure visibility of those who are otherwise overlooked.

Minority and Indigenous Trends 2021: Focus on COVID-19 is available online.